Investment Multiplier is the contribution of the famous economist John Keynes. He explained it with the help of the country’s investment and Gross Domestic Product (GDP).

The amplified income is in the multiple of the initially invested amount. We assess the number of times it manifolds during the process. The investment multiplier works in both directions:

We calculate the value of Investment Multiplier by a ratio of change in National Income to the proportional changes in the Investment. It is affected by the Marginal Propensity to Consume (MPC) and denoted by the alphabet ‘ k ‘.

The multiplication occurs because the income received from investment is spent on consumption. Further, this income from the consumption is spent again due to MPC.

Simultaneously, saving some part of the total income due to Marginal Propensity to Save (MPS). This process takes place until there is no scope left for further Consumption and Saving.

There are three alternative formulas available for the calculation of the Investment Multiplier.

Δ k is the value of the Investment Multiplier,

and,  Δ I depict the change in Investment.

However, MPS is inversely related to the investment multiplier. As the part of total income is saved and not consumed, leading to a reduction in the multiplying effect.

Maximum and Minimum value of the Investment Multiplier

Maximum Value
When the MPC is one, then the value of the Multiplier is Infinite. It is explained with the help of the equation given below:

Minimum Value
When the MPC is zero, then the value of the Multiplier is One. Explained in the following equation: 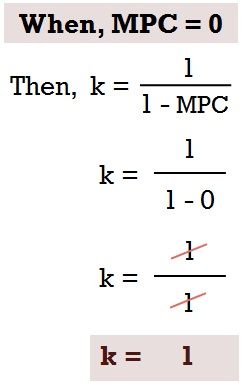 Working is based on the fact that the expense of consumption by one person is another person’s income. The points below explain the working of the Multiplier in detail:

Note: After every round, the increment in the income will increase with a decreasing rate.

In this, the multiplier effect on the income of the changes in investment happens simultaneously. More precisely, income multiplication takes place without any delay or time lag.

We can also refer to it by following alternative terms:

Unlike Static in Dynamic Multiplier, there exists a time lag during the process. The multiplication process takes place gradually over time, i.e. stage by stage, in various rounds.

So, the Dynamic Multiplier is a gradual increase in the total income until it reaches the multiplier value.

It is alternatively known as:

Note: The ultimate value of the Multiplier is the same in both Static and Dynamic Multipliers.

In case of a decrement in investments, a reduction in income starts taking place. This process is the complete reverse of the investment multiplier. Consequently, we refer to it as Reverse Multiplier.

The Reverse Multiplier can be a product of the investment deficiency in the economy.

The importance of this theory in the country’s economy is as follows:

Following are the limitations of this theory:

The economists criticised this theory on the following grounds:

Let us suppose that an investment of Rs.5000 Cr is made in an economy. And the assumed Marginal Propensity to Consume (MPS) is 0.9%.

Calculate the value of Multiplier along with the table of Income Generation.

From the above table, we can conclude that:

Hence, the value of Investment Multiplier (k) is 10 Times.

In conclusion, this theory explains the impact of injecting investments on income and output. The investment will boost revenue and consumption. As a result, the invested amount will manifold several times.

But, this theory has some criticisms and majorly explains the static multiplier. It does not include the dynamic variables during the entire process.