Definition: The Circular Flow model represents the continuous flow of money among various sectors of the economy. The money flow results in economic activities such as production, consumption, investment and expenditure. It plays a significant role while calculating the country’s national income.

The major sectors of the economy are:

The model shows the cycle of economic activities among these sectors of the economy. The level of flow is depicted through two, three and four sectors models.

There are certain leakages (saving) and injections (investment) in the economy. These components lead to an increase or decrease in the national income.

There are two types of flow within the model, i.e. Real flow and Money flow:

Real Flow: It is the mobilization of resources and commodities in the economy. For example, factors of production, goods and services.

Money flow: It depicts the movement of money between households and firms. For example, factor payments and consumption expenditure. 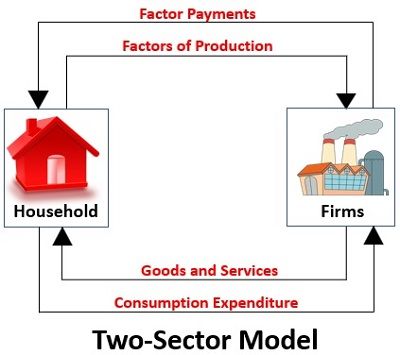 This model shows the circular flow of income in a simple economy. It consists of two sectors, i.e. households and firms. The domestic sector provides the factors of production to the firms like:

Assumptions of a two-sector model

Note: The firms make factor payments out of money received from the household’s consumption expenditure. This depicts the income flow in a circular direction.

Two-Sector Model with Saving and Investment 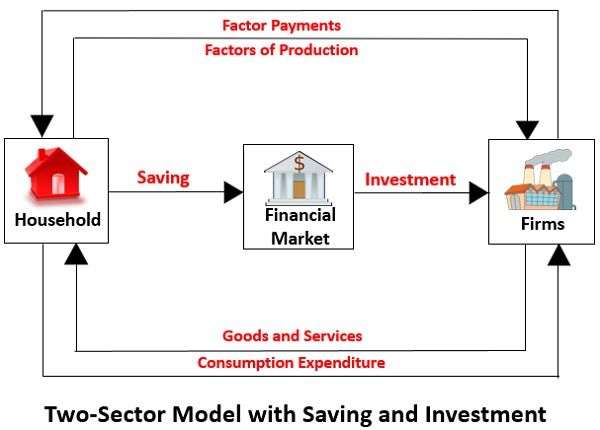 In this model, we assume that the household saves some amount from their income. However, savings are the leakages from the economy, as discussed in the previous sections.

Because of the simple or closed economy, the firms will get less money for production. Hence, it will affect the volume of production and decrease national income.

So, firms borrow money from the financial markets to maintain the flow of money. It is also called injections in the economy.

Therefore, in the two-sector model, the equilibrium is obtained when 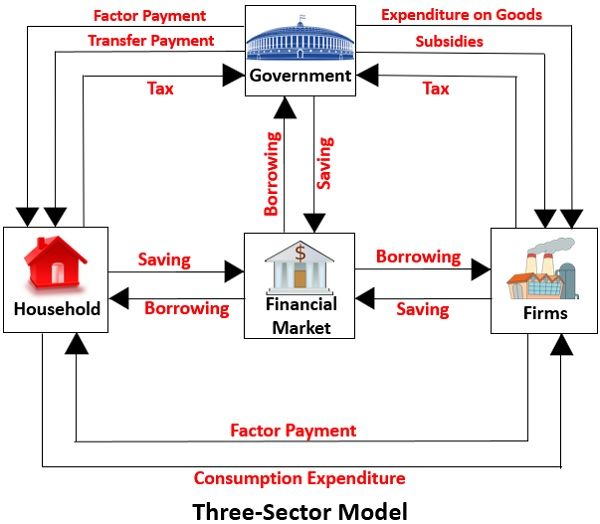 The Three-sector Model includes government along with domestic and corporate sectors. It plays a crucial role in maintaining balance in the economy.

Government acts both as a producer and consumer for households and firms. As it receives money in the form of direct and indirect taxes. Whereas, spends money by giving subsidies, services and investments in construction projects.

The flow of income between government and different sectors is as follows:

Therefore, in the three-sector model, the equilibrium is obtained when

Note: The taxes are leakages, and government expenditures are injections into the economy. 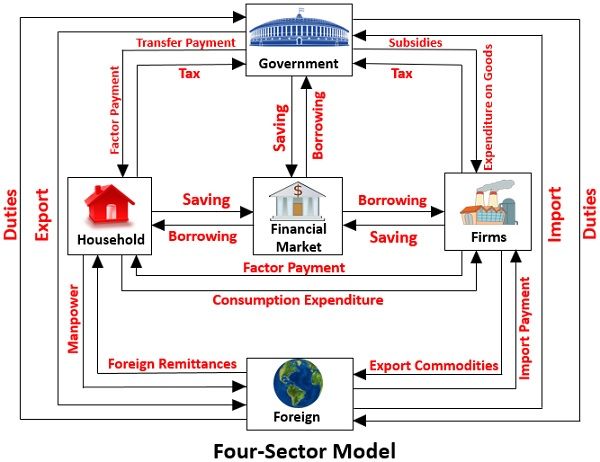 The Four-sector model shows the flow of income in an open economy. It consists of economic activities between the three sectors with the foreign sector/rest of the world. The trading involves imports and exports with foreign countries.

In an open economy, imports and exports affect the national income.

Assumptions of a four-sector model

The flow of income between foreign and different sectors is as follows:

There can be three possibilities:

Therefore in the Four-sector model, the equilibrium is obtained when

I is Investment Expenditure 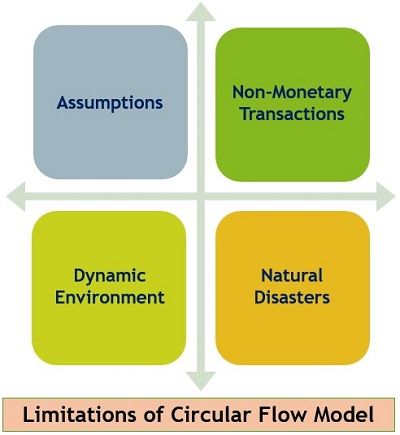 All in all, the circular flow model provides an idea about the working of the economy. It shows the flow of money among economic sectors through two, three and four sector models. The flow of income impacts the National Income of the country. Leakage and injections also affect the cycle by increasing or decreasing money flow.

There should be a balance in the flow of income in the economy. It may be achieved by the Fiscal and Monetary policies of the country.