Definition: Reverse Stock Split merges companies’ stocks into fewer units in the Financial Market. It is the complete converse of the Stock Split. Moreover, it is the company’s strategic decision to convert the number of existing shares to fewer yet more valuable ones. The split takes place based on a predetermined ratio.

It is also known as Stock Consolidation, Share Rollback and Stock Merge. 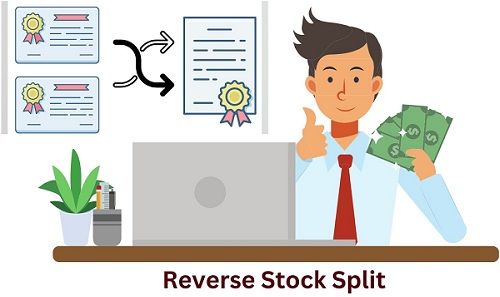 A reverse stock split leads to a reduction in the number of shares. However, the market capitalization of the company remains unchanged. It only changes the distribution pattern of shares.

Post split, the outstanding shares reduce in number. On the other hand, there is a significant boost in the per-share price.

Sometimes company’s share prices may degrade to the extent that they lose a significant value. And if this situation persists, the company may even get delisted from the exchange. Due to this fear, they adopt share consolidation as a strategy to induce the share price.

Before moving further, let’s understand what a stock split is.

It is a situation where companies divide the existing shares into multiple shares. The motive behind practising a stock split is to increase liquidity by reducing the share price.

It is also known as Forward Stock Split.

Companies go for a reverse stock split for a variety of reasons. However, it is purely a strategic decision of the company as some giant companies have also opted for it.

Some common reasons that may lead to it are as follows: 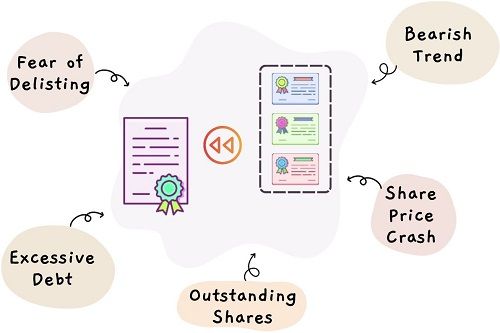 Suppose the company’s share capital is $70,000/-, which breaks down to 7000 shares of $10/- each. The company has announced a Reverse Stock Split of 5:1, considering the decline in the share prices on the stock exchange.

Now, let’s see the subsequent changes due to share consolidation on the Company and Shareholders.

Note: There is no change in the market capitalization after share consolidation.

Performing a shares consolidation outlines the following advantages to the company:

It helps estimate the number of shares owned and the changed share price post-split. You need to input the original share price, your current holding and the reverse split ratio.

Generally, the formula used for calculation is: 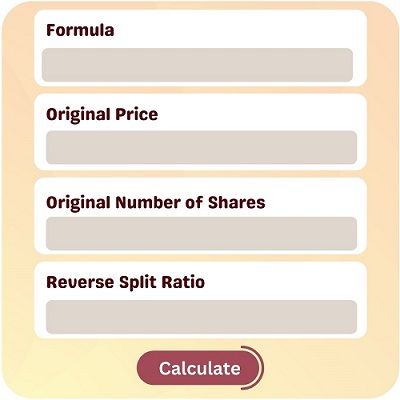 We cannot ignore the fact that the companies take this decision in their rough patch. Specifically when there comes a fear of being delisted.

This leaves a negative impression on the customer’s mind. Moreover, it portrays that the company’s shares are crashing, and it is falsely amplifying it.

In addition, the companies performing reverse split multiple times don’t attract new investors. And some shareholders may even dilute their holdings and encash their stocks.

The bottom line is that the stock split is not a good signal, so companies must avoid it.

What does a reverse stock split mean?

It is basically the conversion of stocks into smaller numerical units. It is merely an accounting change in the company’s stock distribution structure.

How to profit from a reverse stock split?

We’ve learnt that a share consolidation does not affect the investors. Still, existing and potential investors could make a profit out of it in the following ways:

How does reverse stock split work?

The math behind the reverse stock split is nothing but conversion and replacement.

The company take back the existing shares from the holders and replace them with fewer ones. This conversion is based on a predetermined ratio decided by the company.

For example, if the company announces a reverse split for 2:1, then the holders with 4 shares will be replaced with 2 in their respective accounts.