Definition: Liquidity Preference Theory implies that Interest is an economic event determined by two factors, i.e. the Demand for Money and the Supply of Money. The great economist Lord Keynes gave this theory for Interest rate determination.

Conventionally, classical theorists suggested that people only use money for transaction motives. They keep the money to meet their daily needs and acquire goods and services.

Whereas, according to Keynes, people store some cash besides spending money on necessities. And this money is later used for investment with the motive to earn some reward.

They maintain liquid money to invest it in the capital market instruments like Bonds. He emphasized that money is used for exchange and is also used for Saving and Investment.

According to him, people store their wealth in the form of:

Among these, the Debentures and Bonds demand payment first. After that, we can take advantage of the benefits associated with it. People are ready to block liquidity and prefer to earn rewards.

Keynes proposed this theory in his book based on economics. The book’s name is “The General Theory of Employment, Interest and Money “.

This theory is alternatively known as:

What is an Interest?

Interest is a reward generated by holding the liquidity for some time in some form other than cash.

The money supply is the total quantity aggregate sum of money that the regulators and banks decide. As per Keynes, it is the summation of the money in circulation and bank deposits.

In the Keynesian analysis, money is the asset with the highest liquidity. Thus everyone requires liquid assets with them, and therefore it is demanded.

People sacrifice their liquidity and give their assets in the form of a loan. They receive an amount above the principal amount as a reward for dissolving liquidity.

Keynes explained that people keep liquid money for three causes or motives. He proposed two additional motives than the Transaction motive. These motives constitute the demand for money in the market.

The causes or motives for holding money are as follows:

As per Keynes, people use a part of their for daily transactions. They use this money as an exchange medium for goods and services.

This motive is also stated by the economists earlier in their theories.

Precautionary motive is the people’s money kept as a precaution against contingencies. It is the money one keeps aside for unforeseen expenses and opportunities.

The money for this motive leads to delays in the receipts and additional expenses. But to earn more returns, one may maintain less money for Precaution.

People store the excess money left after transactions and precautionary motives and invest it in Bonds. They invest this money to generate some interest over the principal amount invested.

People will only invest when they are expected to earn high interest from the market. If they think the Interest is likely to fall, they will keep the money and invest it at higher interest rates.

Note: The transaction and precautionary demand do not impact the interest rates. It is only affected by the speculative demand for money.

The diagram below explains the determination of interest rate with supply and demand. 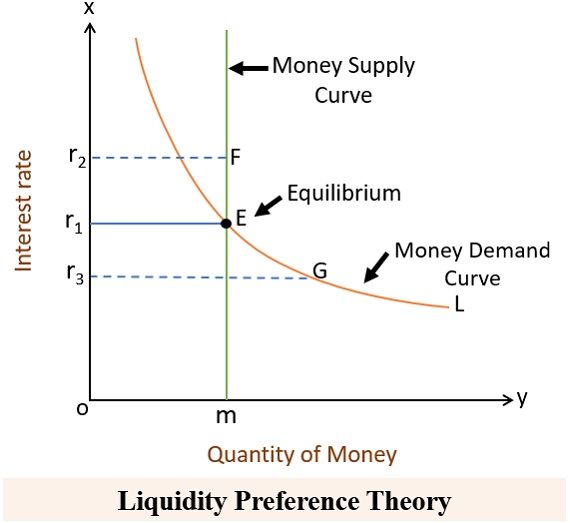 A liquidity trap is when people prefer liquidity over Investment in the capital market. Because there is a fall in the Interest rates that makes people indifferent between cash and capital market instruments.

People will continue to prefer liquidity until they expect an increase in the interest rates. As they invest to earn a specific reward on their principal amount.

According to Keynes, there comes a situation when the interest rates are considerably low. So, the people prefer absolute liquidity in place of investing in Bonds.

The people prefer absolute liquidity to hold money and invest at increasing interest rates in the future.

The liquidity trap is an excellent contribution to economics by Lord Keynes in this theory. 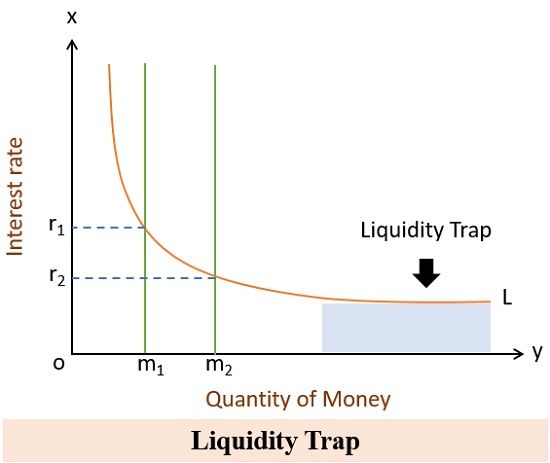 Variation in the Equilibrium Interest Rates

There are variations in the interest rates and market equilibrium. These variations are due to the considerable changes in demand and supply of money. Let us see the impact on the Interest Rate due to changes in:

Changes in Supply of Money

When the money supply increases with constant money demand, the rate of interest decreases and vice-versa. Hence, there exists an inverse relationship between supply and interest rate.

If the money supply increases rapidly beyond market equilibrium, the interest rate will fall aggressively and stuck in a liquidity trap.

In this situation, any further increase in supply will not decline the interest rate. Consequently, people will hold cash and stop Investment in Bonds. 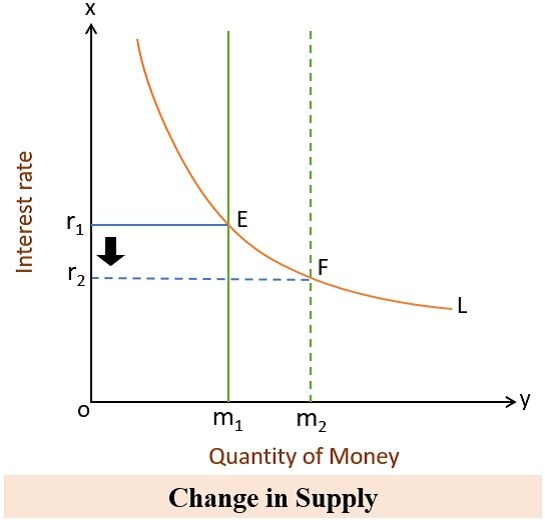 The demand for money changes as the Transactional and Speculative Demand changes. 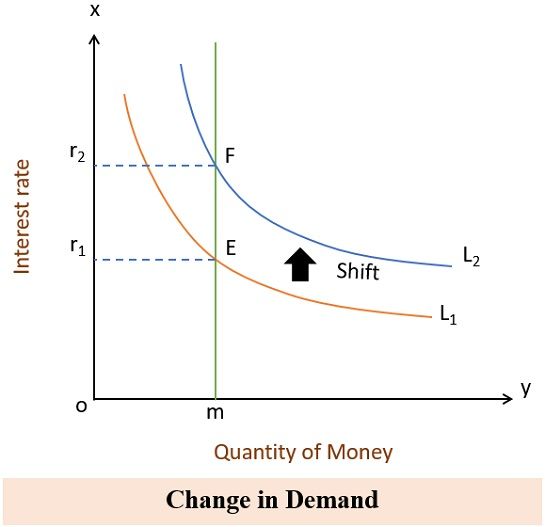 The shift in the demand for money curve will give a new interest rate each time. So, there is a direct relation between transaction demand and interest rate.

The speculation demand is based on the future projections of the people. These projections can be an expected increase or decrease in future interest rates.

If people expect a rate below the regular interest rate, the demand curve moves inwards and vice-versa.

It is among the essential theories of Economics. Its various features are as follows:

To sum up, besides many criticisms, Lord Keynes contributed a lot through the Liquidity Preference Theory. He enlightened the two more causes of holding liquid cash. These are Precautionary and Speculative motives.

As per him, the equilibrium interest rate is when the money demanded equals supply demand. There will be disequilibrium due to the changes in speculative demand.