Definition: A budget line is a straight line that slopes downwards and consists of all the possible combinations of the two goods which a consumer can buy at a given market price by allocating all his/her income. It is an entirely different concept from that of an indifference curve, though they are both are essential for consumer equilibrium.

The two essential components of a budget line are:

The concept of the budget line is precisely explained through the following equation:

Example: A person has 50/- for buying pens. He/She has the following options for allocating his/her amount such that he/she derives the maximum utility from limited income:

The above Budget schedule can be plotted on a graph to obtain the appropriate budget line for this instance;

Budget Set: Budget set defines all such combinations of the two goods lying within the affordability limit of a consumer.

The market rate of exchange refers to the ratio of units sacrificed of Y to acquire specific units of X at a given market price. It indicates the slope of a budget line.

The price ratio can be understood as the relationship between the prices of the two goods say X and Y, where both the products are inversely related to each other. It is constant throughout a budget line.

It has specific characteristics which distinguish it from other economic tools.

Some of these features are discussed below:

Assumptions of a Budget Line

As we know that economics is mostly based on assumptions, so goes for the budget line.

To make the results and analysis more clear and easy to understand, the economist assumes the following in respect of a budget line: 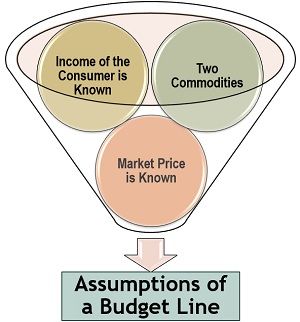 The slope of a budget line can be determined with the help of Market Rate of Exchange.

Why does a budget line slope downward?

As we know that the consumer has a fixed income, he/she has to let go of some quantity of Goods Y to get an additional unit of Goods X.

This inverse relationship between both commodities leads to a declining slope.

Please refer the above-given example to get a practical overview of a downward sloping budget line.

A budget line consists of consumer’s income, the price of the goods and the quantity in which they are purchased. Here, the volume of products is a controllable agent while the other two may vary with time.

Therefore, it shifts from its original position due to the following two primary reasons:

Shift due to Change in Price: The price of a commodity is volatile in nature and change from time to time. The market price of the goods will either decrease or increase.

If the other factors like income and price of goods Y remain constant and the price of one commodity say X decreases; the buying capacity of the consumer for goods X will automatically increase.

If the other factors remain constant, and the price of goods X increases, the buying capacity of the consumer for goods X will automatically decrease.

Shift due to Change in Income: Income is another vital agent that leads to a shift in the budget line.

An increase in the consumer’s income means expansion of his/her purchasing power and vice-versa, thus leading to a shift in budget line too.

A budget line is that part of the budget set, which highlights all possible combinations of two commodities and focuses on the expenditure of total income.
It works on the principle of sacrificing one commodity to acquire more of the other goods within a limited income and at a specified market price.