Definition: Gross Domestic Product (GDP) is the total market value of the services and final goods formed within a nation’s boundaries in a financial year. It is used to measure the comprehensive achievement of an economy. The nations’ GDP growth is calculated with an increase in the GDP from the previous year to the current year, which can be calculated yearly or quarterly.

Following are the two factors of the GDP:

2. Real GDP: Real GDP is valued on the constant price; thus, it shows the Gross Domestic Product that adjusts for Inflation or Deflation. It is evaluated by multiplying the total number of goods and services produced during the year with the selected base year’s prices. Here base year implies the year of comparison taken as a base for calculating the GDP. Currently, a base year which is considered for computing the real GDP of India is of 2011-12.

Real GDP only increases with an increase in the quantity produced as prices are always constant while computing it. It is a better indicator of economic growth or production because it does not consider price effect but shows the actual production.

In this approach, we calculate the income earned by all the factors production (Inputs which goes into producing final products). Majorly there are four factors of production –

In India from 2015, we refer to GDP market cost as India’s GDP, before that GDP factor cost was considered GDP of India. The formula for Both the factors are as follows-

Formula for GDP at Factor Cost 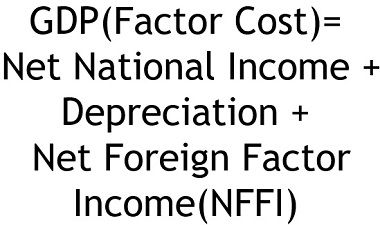 Formula for GDP at Market Cost

Sum of money spent on goods and services comes under the expenditure approach. The formula for finding GDP with the following method is as follows-

Where;
C = Monetary value of consumption
I = Gross Investment
G = Acquisition of goods and services by the government.
X = Net exports produced within a nation during the year.

Following are the measures of the GDP: 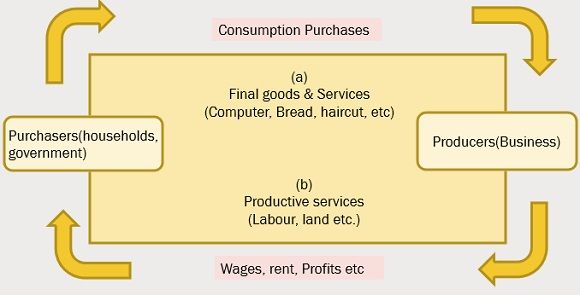 The flow of final products, as a flow of earning or incomes are the systematic ways to find GDP. It can be understood easily with the help of the above diagrammatical representation.

In the upper curve, customers buy goods and services, and the total flow of money which they spend every year is one measure of GDP. The lower curve, shows the annual flow of output cost, the revenue that business pay-off in interest, wages, dividends, rent, profit.

These two measures should always be identical.

To understand it properly it is important to know,

By inflation we mean, time of generally rising prices in the economy, and it can be of two types-

Following are some of the drawbacks of GDP:

For Example: If an individual plants vegetable for their personal consumption, its value will not include in GDP, but when you purchase or buy it from the market, it will include in GDP calculation.

GDP of a country includes a product and services produced within its boundaries. Thus, the products manufactured in India and exported to other countries will be considered in calculating the nation’s GDP for the year, whereas; items imported from outside India will not be included in GDP calculations.