Definition: Staggered Board or classified Board is a board which consist of different classes of the directors for different terms or time period, as the election is conducted at a different point so that all the director’s term will not expire at the same time.

In general, there are three classes of directors whose tenure and responsibilities are decided by the company. The term period of every director differs from each other some may work for the small-term; on the contrary, the term period of some directors may be longer. Companies use such a board to meet their special needs, such as increasing the term period of their experienced directors to benefit from their experience. At the time of the hostile takeover shareholder’s returns is more likely reduced by the staggered board when compared with the non-staggered boards.

How does the staggered board work?

It consists of the group classified directors divided into three classes holding almost 1/3 position in the board. Every new member gets only one class amongst total positions, i.e. amongst total positions, only a few percentages of positions are held by every class. The staggered board is a hostile takeover defence strategy. When a company has a classified board, and any hostile bidder wants to take over that company, they have to wait for at least one year, and if the bidder wants to acquire the company, they need to win at least two seats on the board.

Example of Staggered Board

XYZ Company is incorporating a classified board structure which includes 15 directors, each one is appointed for 3 years term, and elections are done on a yearly basis.

Thus, these directors will be divided into 3 classes, and 5 directors are placed into each class. However, every class overlaps other, and at the time of the election, only one part of the board can be up for the election.

Importance of Staggered Board

Importance of a staggered board for any company can be understood with the following points: 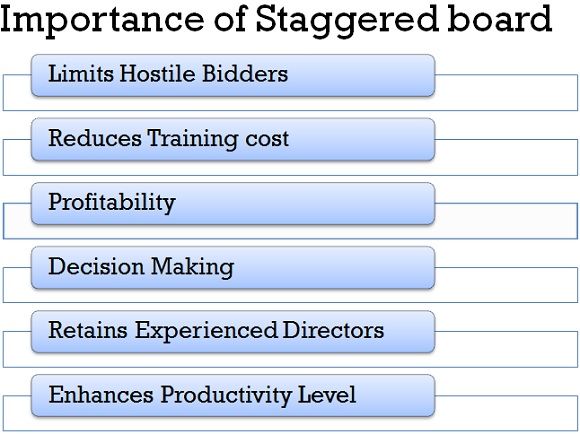 Why staggered board should be considered?

Staggered Board helps the company operate in a similar fashion market and incorporate the poison pill tactic in which a single hostile board director is appointed. The companies use this plan for saving their company from the hostile takeover. These poison pills can be further classified into two types:

Why staggered board should not be considered?

There are chances that a single hostile bidder wins one seat, and the remaining seats will be provided to the board to fight against turnover. This will keep the same management for a longer period of time, resulting in an anti-shareholder move and staggered board directors will work according to their interest as they have the power to lower shareholders returns.

Difference between Staggered Board and Normal Board

Following are some of the difference between a staggered board and the normal board:

Staggered board divides the directors into various segments who are elected for different terms of the year. In general, three classes are made in which 1/3 seats are reserved for the staggered board of directors. A staggered board plays a significant role in the company’s portfolio as it prevents the company from hostile bidders.