Reserves are the portion of the earning of the business which the company retains to meet any forthcoming emergencies or contingencies. In contrast, provisions are the charge against income and are treated as expenses and entered into a profit and loss account. Reserves lists beneath “reserves and surplus” head whether they are capital reserves or revenue reserves.


What are the Reserves?

The sum allocated from the profit earned by the business for meeting future’s unexpected emergencies or contingencies is termed as “Reserves”. Companies generally assign some percentage of their profit as reserves which provides strength to their business and balances the financial condition of the business. Reserves can be used for making dividend payments, purchasing new assets for the business. However, the company is not bound to create reserves, only if the company earns sufficient profits during the year from that the company can create reserves for the future to face any unexpected circumstances. And, if these reserves won’t get utilized for predetermined purposes, the amount allocated for such reserves can be used by the company for any other needs of the business.

Contribution of shareholders, as well as overall static profits, are the part of the net worth of the company, these contribution or profit detained in profit and loss account or to a reserve. Reserves are split into two categories. They are as follows: 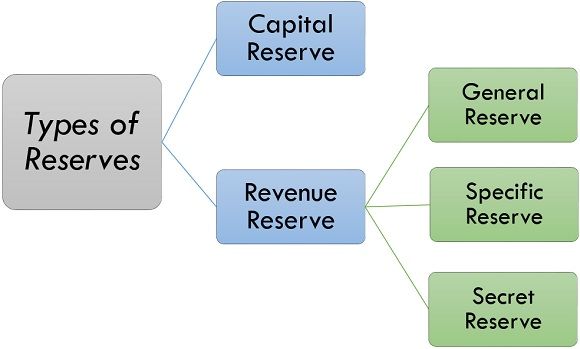 The reserves made from capital funds or profits are known as capital reserves. These kinds of profits do not arise from normal business activities and are made from the following:

Revenue reserve implies that profit which is available for dividend distribution to the shareholder’s reserve for now for any purpose. These reserves usually become useful for the expansion of the business and to provide financial strength to the company. Although maintaining reserves are not mandatory for the companies; thus, the auditor is also not bound to report reserves in their report and need not verify it much. However, the auditor can guide the administration on the significance of creating reserves, and maintenance of reserves for the betterment of their business. There are three parts of the revenue reserve; they are as follows:

The portion of the profit kept to enhance the company’s fiscal condition is known as a general reserve. It provides aid in increasing the working capital of the company, and to meet uncertain emergencies that can arise in the future span of the business. It may be considered as an undiversified profit of the company as it is an allocation of profit.

Specific reserves are precisely the same as provisions. These reserves are created to meet specific precise expenses known to the company and are treated as a charge against revenue. This kind of reserve is created whether the company earns a profit or faces losses. They are known as a specific reserve as they are made with the provisions, especially for the fixed expenditure along with provision amount set aside for that expense. These types of reserves are made with the following objectives:

It is a reserve that is not directly shown by the company in their balance sheet; they are considered as hidden reserves or inner reserve. The objective behind the creation of such a reserve is to demoralize competitors to enter in a similar kind of business as these kinds of reserves reduce the profit of the business and present wrong pictures of profitability to the rivals. These reserves are created by under-valuation of inventories at the end of the year, by maintaining exaggerated reserves for doubtful debts; by charging capital expenditure to revenue reserves, by escaping some assets from the balance sheet, etc.

What are the provisions?

Some of the provisions are as follows: 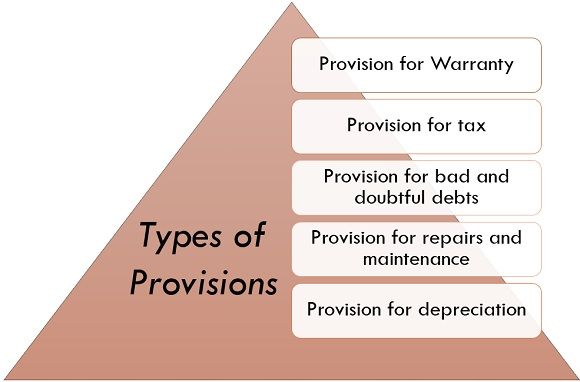 This provision is made by the company to meet the expenses incurred on warranted products. For example; if the company sold Air conditioners with a warranty of 10 years for its parts. And if the customer faces any issues with the product in these 10 years, the company will repair the product or will exchange it with a new one.

Provision for Bad and Doubtful Debts

When companies are known with the fact by reviewing their financial statement that certain debtors will not pay their debts or it may be doubtful whether they will pay or not. For meeting such expenses, the company creates provision for bad and doubtful debts on an estimated basis as the amount may vary.

Provision for Repairs and Maintenance

This provision is made for the upcoming repairing and maintenance expenses of the plants and machinery of the business, although it is certain that repairs have to make, the actual sum remains uncertain, the company creates a provision for repairs and maintenance on an estimated amount.