Definition: Debenture Redemption Reserve (DRR) is a reserve created to designate a portion of the company’s divisible profits, used during the Redemption of Debentures. It acts as a shield against the default in payment to the debenture holder from the company’s end at the due date.

The goal behind the creation of DRR is to cut the risk of fund shortage on Redemption. As the redemption process lay severe impacts on the company’s liquidity.

It is helpful for companies in:

The company makes DRR out of the surplus amount in the Profit and Loss A/c. Consequently, it leads to a decrement in the company’s divisible profits.

Companies invest some amount outside the business to ensure the availability of funds. However, they can invest any time before the commencement of the redemption process.

The funds accumulated in the DRR are strictly for the Redemption of Debentures.

The rules about DRR are specified in the Companies (Share Capital and Debentures) Amendment Rules, 2019. The Ministry of Corporate Affairs gave these rules.

The company must meet the DRR and Investment of the Debentures requirements given in the rules above.

Before the Redemption process, companies must create DRR equal to 25% of the redemption amount. The companies that are obliged and exempted from the formation of the DRR are listed in the next section.

The companies that are required to create DRR are as follows:

The companies exempted from the creation of DRR are as follows:

Following are steps that one can follow while redeeming debentures using DRR:

After the Issue of the Debentures:

At the time of Redemption:

The amount collected in DRR may exceed the redemption amount due to holders. And this excess amount is the surplus for the company.

But the company cannot use this amount for other purposes. They transfer the surplus money to the General Reserve.

It appears on the liabilities side under the Reserves and Surplus part of the Balance Sheet.

We place it under Non-current Assets on the asset side of the Balance Sheet.

The companies invest some amount from the redemption reserve in the secured instruments. However, they sell these investments before the due date of Redemption.

The investment duration depends on the due dates for Redemption. The sale of DRFI provides liquidity to the firm.

Companies can invest in the following instruments:

The company must make this Investment at the allotment of Debentures. And it is assumed that the company have enough profits for profit appropriation.

Like DRR, we cannot use the amount of DRFI for other purposes than Redemption.

It is the form of DRR in which we reinvest the principal amount with interest earned. We record the DRR A/c on the debit side and DRFI A/c on the credit side.

As the name suggests, we reinvest only the principal amount. The reinvestment does not include the interest earned on that Investment.

We credit the interest earned on the Investment to the Profit and Loss A/c.

Z Traders decided to redeem their outstanding 8% debentures of Rs. 400000/-. They provided the notice about Redemption to Debenture Holders on 01st April 2006. The company announced a premium of 5% at Redemption as of 31st March 2005.

The statement of profit and loss shows a surplus of Rs. 420000/-. Z Traders opted to redeem their outstanding debentures out of this profit. Make relevant Journal Entries for the redemption of debentures.

Journal Entries in the books of Z traders:- 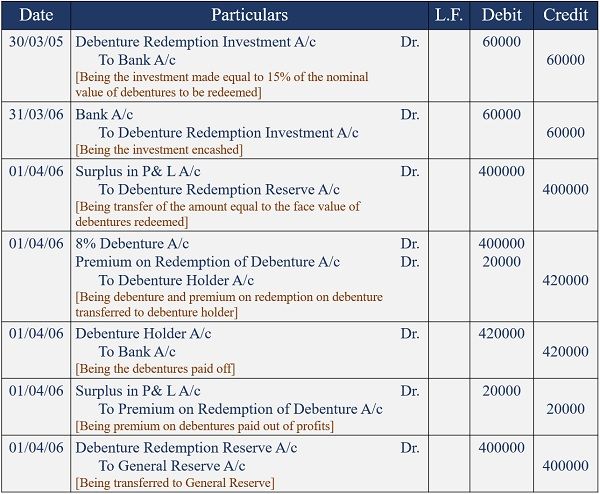 In conclusion, the companies must create for the Redemption of Debentures. It is a part of the divisible profits accumulated as protection against uncertainties.

DRR keeps companies prepared for the financial instability resulting from the redemption process.