Definition: Debentures are the certificate or the creditorship securities issued by the company to the public when there is a need of capital for expansion and development, but the company don’t want to uplift their share capital. They are the liability of the company which has to be repaid in a specific time period; however, a feasible alternative of term loans for companies.

Following are some of the features of Debentures: 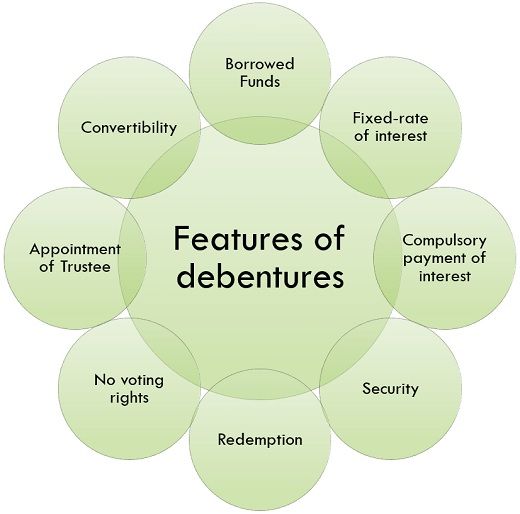 Based on various distinctive aspects there are numerous types of debentures; they are as follows: 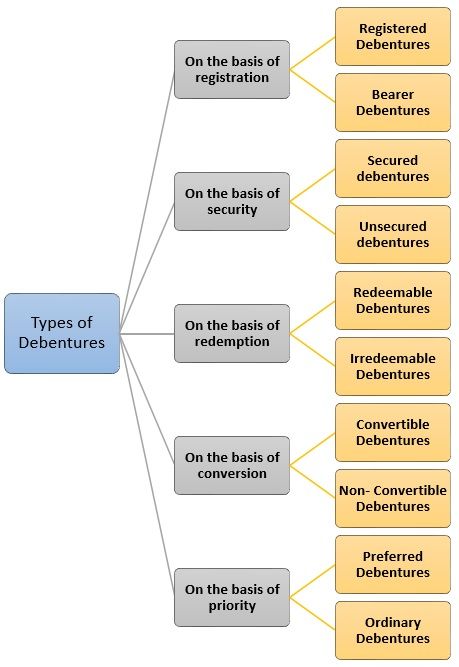 On the basis of registration

1. Registered Debentures: Debenture holders whose full details such as name, phone number, address are retained and registered under the company’s register can only claim for such debentures, transfer of such debentures also requires registration and are not transferable by simply delivering documents to one another.

They are payable to the bearer or holder of the security and are easily transferable by the holder to any person with his consent of transferring.

On the basis of security

Such charges must be registered within 30 days from the date of issue of the debenture.

On the basis of redemption

1. Redeemable Debentures: These debentures can be redeemed either at par, premium or discount after a certain period of time or on the expiry of the term as well as can be called for redemption by the company on demand of debenture holders on the lumpsum basis.

2. Irredeemable Debentures: Company has no constraint or is not bound to repay such debentures during its endurance as these debentures are not issued with any specific redemption date, and thus are perpetual in nature; they can either redeemed at the time of winding up of the company or on the occurrence of an any uncertain event.

On the basis of conversion

1. Convertible Debentures: These debentures are considered as long-term unsecured debts of the company.

However, it can be converted into equity or preference shares by the holders as and when required at the rate declared in the agreement signed at the time of the issue of debentures.

On the basis of priority

1. Preferred Debentures: During the time of winding up of the company, the holders of the preference debentures have a first right or priority to get payment of their debentures.

2. Ordinary Debentures: The holder of such debentures gets payment after the payment of preference debenture holders at the time of winding up of a company.

Following are some of the advantages of the debentures:

Following are some of the disadvantages of the debentures:

Issue of Debentures for Cash

Various ways for issuing of debentures for cash are as follows:

Journal entry for the issue of debentures at par:

Journal entry for the issue of debentures at a premium:

Journal entry for the issue of debentures at a discount:

Issue of Debentures other than cash

Example: XYZ limited purchased a machine costing Rs.88000 Payable by the issue of 10% debentures of Rs.100 each at

Debentures are considered as the debt that is borrowed from the general public for the growth and development of the company against which the investor enjoys a certain amount as an interest paid by the company for a fixed period of time.