Definition: Company Auditor is an individual appointed for preparing an independent audit report of the company. They can be either appointed by the company’s Board of Directors, Shareholders, Central Government or Comptroller and Auditor General of India (C&AG) accordingly. An individual must have expert knowledge and a practising certificate from the Indian Institute of Chartered Accountants for becoming a company auditor.

It is mandatory for the companies to get their financial statements audited for every financial year for which Companies Act 2013, states all the provisions associate to company’s audit in Sec 139 to Sec 142, whereas; Sec 128 to Sec 132 reported the provisions linked with the accounts of the company.

Qualification and Disqualification of company auditor are regulated by the Companies Act, 2013 (Sec 141), and these provisions are pertinent for all kinds of appointments.

For becoming a company auditor one should have any one of the following qualifications:

The certificate holder issued by the law entitling him to act as a company’s auditor in India holds the right to become an auditor of a company.

The following individuals are not qualified to become a company auditor:

In case of a partnership firm, if any of the partners is disqualified because of any above reasons, the firm will also be disqualified from being appointed as company auditor.

The following are the ways of appointing the company auditor: 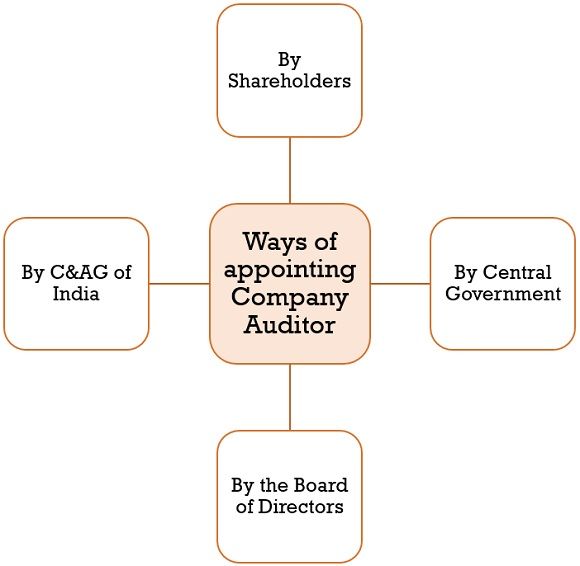 The appointed auditor must get declared within the 7 days of the resolution passed by the company, and the auditor should send written acceptance or denial of the appointment within 30 days of receiving notice. If he accepts the offer, he will be a company’s auditor from the appointment date till the next annual general meeting of the company.

The company auditor has the following rights: 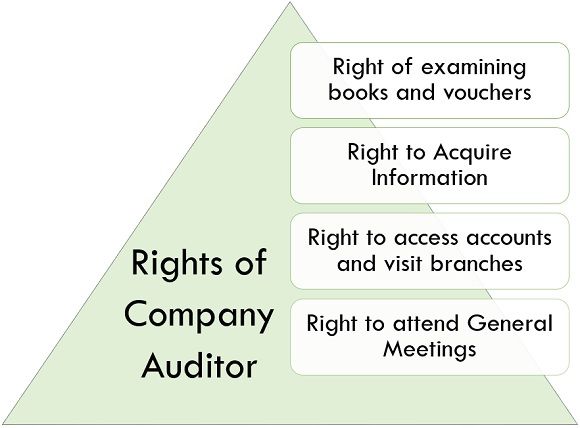 1. Right of Examining Books and Vouchers

The auditor has a full right to ask for any document of business if required by him for performing his work. He can ask for all the documents of the head office or any other branch in the working hours of the company for verifying the vouchers to prepare his audit report. The company cannot refuse to present the asked documents by the company auditor.

The company auditor has a right to visit the branches of the company and access their accounts if he feels to go through it for his report generation even if another auditor audits the accounts of branches. He has full right to access vouchers and books of accounts of the branches whenever required.

The company auditor has a right to receive the notices regarding General Meetings of the company; although it’s not his duty to take part in the discussion, he can give clarification on any part where his consent is required as an auditor. However, he cannot outbreak responsibility of any omission in his report.

Company Auditor is an individual appointed to examine or verify the fiscal records of the company, he should have specialized knowledge in his field, and along with expertise, he should be honest, thoughtful, cautious and careful.