Both monetary policy and fiscal policy go hand in hand when it comes to the economic stability and growth of a nation. The most significant difference between the two is that monetary policy is introduced as a corrective measure by the central bank to control inflation or recession and strengthen the Gross Domestic Product (GDP). Whereas, fiscal policy is implemented each year by the ministry of finance to promote the economic development of the nation.

Both of these policies play an essential role in the economy since many crucial decisions are taken by the government, on this basis. The success or failure of an economic decision depends majorly upon the change in monetary and fiscal policies.

Let us suppose that there is a recession in a country. Now, let us see how the monetary policy and fiscal policy impacts this unfavourable economic condition.

In case of recession, the expansionary monetary policy is applicable. The central bank plans to increase the money supply in the market to stabilize the economy.

For this purpose, it can decrease the discount rates and the reserve requirement to lower the rate of interest on loans. Along with it, buying of government bonds can be done to facilitate money in the hands of the public and to increase their purchasing power. This will lead to an increase in the market demand and circulation of money in the market.

The government has two options; either it can increase its spendings on public welfare and revival of unfinished or dead projects to generate employment and reduce recession. Or it can provide relaxation on taxes to enhance the purchasing power of the public, ultimately increasing the demand for goods and services.

Monetary policy is a financial tool applied by the central bank majorly to accomplish one of the two objectives; either to control unfavourable economic conditions like inflation or recession or to increase the Gross Domestic Product (GDP) of the country.

Monetary policy is primarily used by the central bank to control unfavourable economic conditions and crisis. Its various other purposes mentioned below: 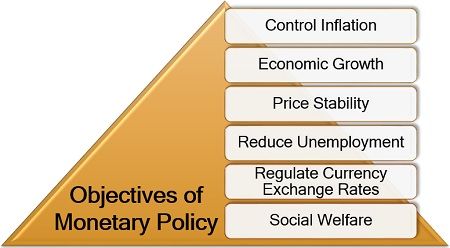 Fiscal policy is the revenue or expenditure measure taken every year by the finance ministry to ensure growth and development of the economy as a whole.

Fiscal policy has a broader scope since it is implemented for the overall economic development of a nation. The following points illustrate the different goals of this financial tool:

Based on its purpose and objective, the monetary policy can be categorized as follows: 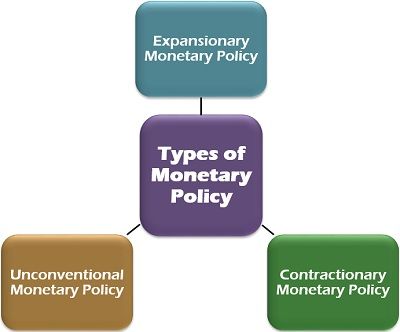 The corrective measure used under this policy includes lowering of the various interest rates, decreasing the reserve requirements of the banks and purchasing or buying back of the government bonds and securities to infuse money in the economy.

For this purpose, the central bank raises the interest rates, increases the reserve requirements of the banks and sell out the government bonds and securities to the public.

The alternative monetary policy comes into action when both the expansionary and contractionary policies fail to control the situation of the extreme financial crisis in a country.

One of the ways adopted is quantitative easing is where the central bank buys government securities to increase the flow of money in the economy. On the other hand, the central bank supplies the financial institutions with ample capital to give out as loans for increasing liquidity in the market.

The fiscal policy can be bifurcated into the following two types, based on its objectives: 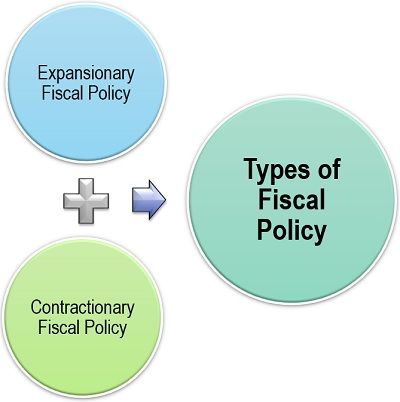 The government uses expansionary fiscal policy to increase the demand in the market along with the purchasing power of the consumers; either by spending more on the public benefits; or by levying low taxes on them.

On the other hand, contractionary fiscal policy aims at decreasing the demand of goods and services and withdrawing the surplus money from the market by either holding back government expenditure on public welfare or by imposing high taxes on the public.

However, this policy is not commonly applicable due to its extreme adverse effects.

The primary tools used for implementing the monetary policy are the adjustment of interest rates, change in reserve requirements and open market operations (OMO). These are explained in detail below: 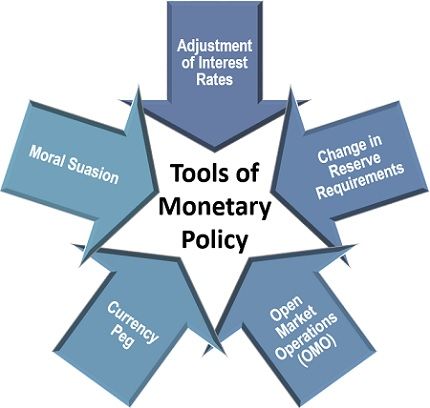 Adjustment of Interest Rates: The primary means to control the money supply in the economy used by the central bank is modifying the discount rates, at which it provides short term loans and advances to the commercial banks.

Change in Reserve Requirements: Every commercial bank is supposed to maintain a minimum sum as the reserve, and this reserve limit is decided by the central bank. Thus, the central bank fluctuates this minimum reserve requirement limit to deal with inflation and recession.

Open Market Operations (OMO): Another useful tool for infusing and withdrawing money from the economy is the buying and selling of government bond and securities in the open market by the central bank.

Moral Suasion: Communication has proved to be an efficient way of handling complex issues. Thus, the central bank uses oral or written communication on the grounds of morality to make the commercial banks act in the desired manner, to protect the economic interest of a nation.

The tools used for implementing fiscal policy by the government can be classified majorly into taxes and expenditure. Let us understand both in detail below: 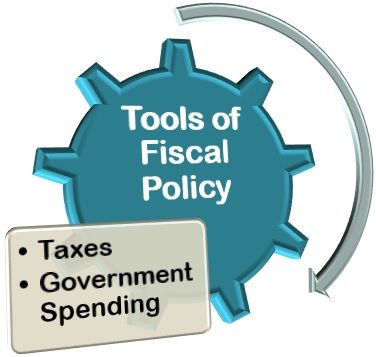 Taxes: The primary source of revenue for the government of any country is, the charge that it collects from the individuals and business entities. Thus, it acts as an efficient fiscal policy tool for controlling and regulating the economy of the country.

Government Spending: Also known as expenditure, the government plans its expenses on the various projects to develop the infrastructure and economy of the nation.

The monetary and fiscal policies are the essential financial tools used for economic growth and development of a nation. The following illustration of the above comparison chart will give you a clear picture of the differences between the two:

The central bank and the government unanimously function to serve the objectives like economic growth and development of a nation; however, they use different tools to accomplish their goals. Both hold equal importance to the country, though the former focuses on the economic crisis, the latter focuses on sustainable development.