Definition: Bank audit is a procedure performed by an auditor appointed by RBI and ICAI to verify the financial statements of the banking institutions and to verify whether the banking concerns are following the law and compliances or regulatory framework applicable on them or not.

Regulatory framework under which banks has to perform their work are mentioned below:

Banking sector is a dynamically changing sector.Thus, it requires proper and effective audit measures to understand the exact financial condition of the banks for which the following procedure is adopted:

RBI and Indian Institute of Chartered Accountants of India (ICAI) together scrutinise and appoint an auditor or audit firm for the audit of the bank after obtaining indebtedness declaration from a respective firm or an auditor.

The audit firm or an auditor cannot assign with any other statutory audit in the year they are appointed as a bank auditor. Before initialising the audit, the firm needs to establish the undertaking of engagement terms describing the time period of audit term. However, as per ICAI Act, 1949 before getting engaged the auditor need to communicate with the previous auditor of the bank in writing for taking his consent.

After that, the new auditor will review the initial opening balance, and if he founds any material misstatement or errors affecting financial statement, he can assert his point of view in his audit report by way of qualified or adverse report.

Thereafter assessment of engagement risk is done, which is a difficult part of the audit procedure, and then the engagement team gets established to manage the risks and complexities of bank operations. Auditor then tries to understand the working environment and internal controls of the organisation for deciding the basis of the audit.

Thereafter, banks accounting process, risk management process and risk identification are made along with control and monetary activities considered by the management. At last, after reviewing all the relevant elements, an auditor prepares an audit report defining his opinion regarding the financial condition of the bank as well as if any loopholes found in following the mentioned regulations under Act.

Bank audit can be of following types: 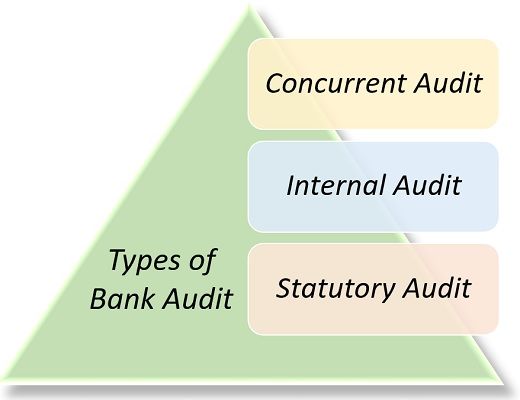 Banks deals with a large number of transactions on a daily basis whose examination is also necessary on a continuous basis for determining the accuracy of the financial statement. For conducting such audit an external auditor is appointed by the bank known as a concurrent auditor who performs an audit of the transaction on a monthly basis.

The main objective of conducting a concurrent audit is to ensure compliance with the internal systems, procedures and the guidelines of the bank. Concurrent audit is always performed on a continuous basis to examine whether proper guidelines are following by the banks or not such as proper documentation, proper cash verification, NPA classification, etc.

Along with the concurrent audit, banks also perform an internal audit for which they appoint an internal auditor to make a regular check on the financial activities of the bank throughout the year.

One of the prominent sectors of internal audit is information system audit, which is becoming a necessary part of a banking system with the rapid growth of computerised banking functions, and it is important to keep an eye on such system on timely intervals to check their work ability.

Therefore, the auditor should also have a basic knowledge of banking software’s so that he may identify the errors easily without any help of bank employee as they sometimes also try to distract the auditor for overlapping their mistakes.

Statutory Audit itself comprises the word statute, which means regulation. Thus, it can be understood easily that the statutory audit is a mandatory audit defined under the law or Banking Regulation Act, 1949. Under Statutory Audit ICAI and RBI altogether assigns the banks to an auditor who is generally a practising chartered accountant and this auditor performs year-end audit in all branches assigned to them by the ICAI from the end of March to first or second week of April.

Some of the important aspects which should be covered under statutory audit is cash verification, tax-related issues, loan accounts verification. After that, an auditor prepares an audit report defining his opinion on a financial statement for which he has been allotted a specific time under which he has to perform an audit and submit his report.

Bank audit is a mandatory procedure to be followed by all banking institutions as defined under the Banking Regulation Act, 1949.

For which an auditor is appointed to perform the work of auditing which includes not only checking of financial records but also to check whether banks are operating according to the mentioned regulations or not.