Definition: Audit Report is the final report prepared and signed by an auditor of the company in which the auditor expresses his opinion concerning the fairness and reliability of the financial statements, and the auditor should prepare the audit report by keeping his client in a mind that he/she will read a report so the report should cover all relevant facts and the auditor’s opinion in writing.

The main aim of preparing an audit report is addressing an appropriate balance amidst flexibility need and correlation in the audit report prepared by the worldwide auditor’s.

Thus, it is prepared with the norms defined under SA-700 to maintain the consistency and similarity in the format of the audit reports, which make the report more admissible for the users.

Audit Report on the basis of auditor’s opinion can be classified in various different types; they are as follows:

Unqualified report shows the clean chit from the auditor’s side, stating that the financial statements of the company are showing true and fair records.

It defines the auditor’s opinion that the company has fulfilled all its statutory legal obligations imposed on it; however, he doesn’t guarantee the absolute accuracy of the records as he makes his opinion on the basis of the information presented by the company.

A qualified report is issued when the auditor expresses a conflicting opinion or provides an opinion with certain reservations regarding the fairness of the financial statement of the company.

When an auditor is not contented with the facts and have any doubt regarding the correctness of the records or material misstatement, he qualifies his report.
However, when auditor presents a qualified report, it is mandatory to state the reason behind the qualification of the report.

The adverse report is presented by the auditor when he has appropriate evidence disclosing that the statement of a company is not showing a true and fair picture, and the misstatement is material.

While preparing an adverse report, the auditor should disclose all the material reasons for presenting such a report.

Disclaimer of opinion report is issued by the auditor when he may not get books of accounts of a company as they are in the custody of income tax department, or because of any uncertainty happened in the company such as fire occurrence.

Thus, the auditor does not get the formation to form an opinion; in such circumstances, the auditor may declaim his opinion by providing the valid reason for it.

Contents of the Audit Report

The contents or elements of the audit report are as follows: 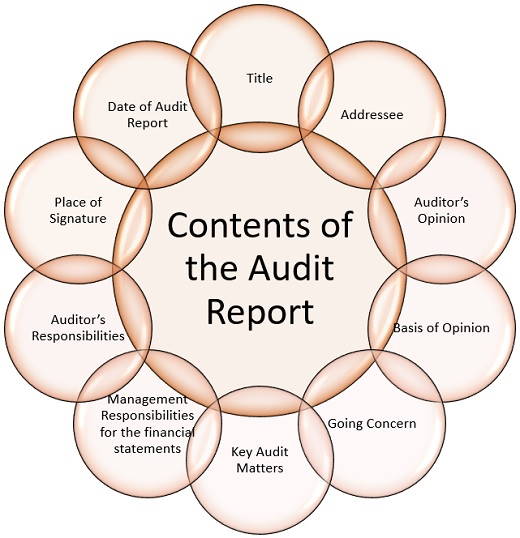 Defines the heading of the report with a title heading “Independent Auditor’s Report”.

In this head of the report, the auditor addresses the reporting authority to whom he has to present the report.

For example, in the case of a company, the auditor addresses the report to the management of the company.

This section of the report is divided into two parts; they are as follows:

Introduction section of the report discloses the company’s information, such as the name of the company.

After that, the auditor has to mention that the records of the mentioned company have been audited including their profit and loss account, balance sheet and all other financial records maintained by them.

At last, also specify the date or period for which audit is done.

The Opinion of the auditor is divided into two sub-heads:

Under a fair presentation framework, the auditor’s opinion shall be that the following financial statement does not have any material misstatement and provide a true and fair view as per applicable reporting financial framework.

Following the compliance framework auditor’s opinion should clarify that the following financial statement is prepared according to the mentioned criteria of Schedule III.

Note: Here, the expression is given assuming the unmodified opinion of auditor on financial statements as per SA700.

Basis of opinion contains the reasons based on which the auditor makes an opinion; it comprises of various basis; they are as follows:

The auditor has to report as per SA570 (Revised) about the going concern status of the company if required.

Key audit matters are like a summary of an audit report, generally listed companies include this section in their audit report to make it easily understandable for their investors.

As the general public or investors may or may not understand the whole audit report.

Thus, companies publish key points describing all relevant issues of an audit report prepared by an auditor as per SA701.

Management Responsibilities for the financial statements

Auditor’s report must consist of management’s responsibilities such as preparation of the financial statement, internal controls, and to assess the ability of the company as a going concern.

This section of the report defines all the responsibilities of an auditor as per SA, such as acquiring reasonable assurance, maintaining professionalism during the process of auditing and other reporting responsibilities.

As well as state that, the auditor communicates with those charged with governance in relation to substantial audit findings.

The city or place where an audit report is signed should be mentioned at the end of the audit report.

The audit report must contain a date along with a sign of an auditor at the end, and the mentioned date should not before the date of gathering audit evidence.

Audit Report is a report describing the auditor’s point of view over the financial statements based on the evidence gathered by him during the process of audit.

Still, the auditor takes a reasonable assurance but not the guarantee of the accuracy of the financial statement.