Definition: Forfeiture of shares is the annulment (cancellation) of the shares owned by a shareholder as a penalty because of the non-payment of allotment and calls due to the company.

Along with the shares, the amount already paid to the company also get forfeited. The company can either Dispose of or Reissue the forfeited shares. 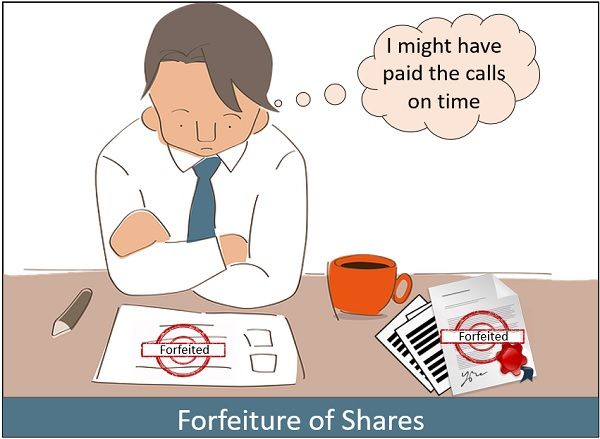 Post forfeiture, the company removes the shareholder’s name from the register. Also, his membership in the company comes to an end.

The power to forfeit the shares lies in the hands of the company’s director. The authorization is given by stating the procedure and provisions in the Articles of Association (AOA).

The director must inform the shareholder before cancelling the allotment of his shares. Therefore, he provides the notice stating the same, 14 days before passing the resolution.

The forfeiture of the shares results in:

Provisions for Forfeiture of Shares

Share forfeiture provisions for a limited company are given in Clause 28 – 34 of Table ‘F’ containing Articles of Association.

These provisions provide all the information in case of default by the shareholder. It covers the conditions, procedure and treatment for share forfeiture.

Whereas, Table ‘A’ of the Companies Act 2013 empowers the Board of Directors for decisions making about forfeiture. These decisions cover:

Impact of the Forfeiture on the Company and Shareholder

The procedure or conditions for forfeiture is as follows: 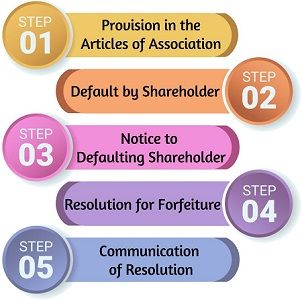 Accounting Treatment of Forfeiture of Shares

At the time of issue, we recorded the share capital on the credit side. While passing Journal Entries for forfeiture, we need to record it on the Debit side.

The accounting treatment of the forfeiture may differ in different cases. We need to analyze the initial conditions of the shares issued at the beginning.

The accounting treatment of shares offered by the company at:

Forfeiture of shares issued at Par

Here the shares were initially issued at Par, i.e. at face value. During forfeiture, we reverse the entries made at the time of issue.

The entries will be on the bases of the number of shares forfeited and the amount due to the shareholder.

Forfeiture of shares issued at Discount

In some situations, companies issue shares at discounted rates. While forfeiting, we cancel the discount offered by the company.

Thus, we credit the ‘Discount on the Issue of Shares’ account.

Forfeiture of shares issued at Premium

In this case, once the Premium has been paid, it cannot be reversed. However, if the shareholder hasn’t paid the Premium, it can be cancelled.

The journal entries are different in both cases.

Journal Entries for Forfeiture of Shares 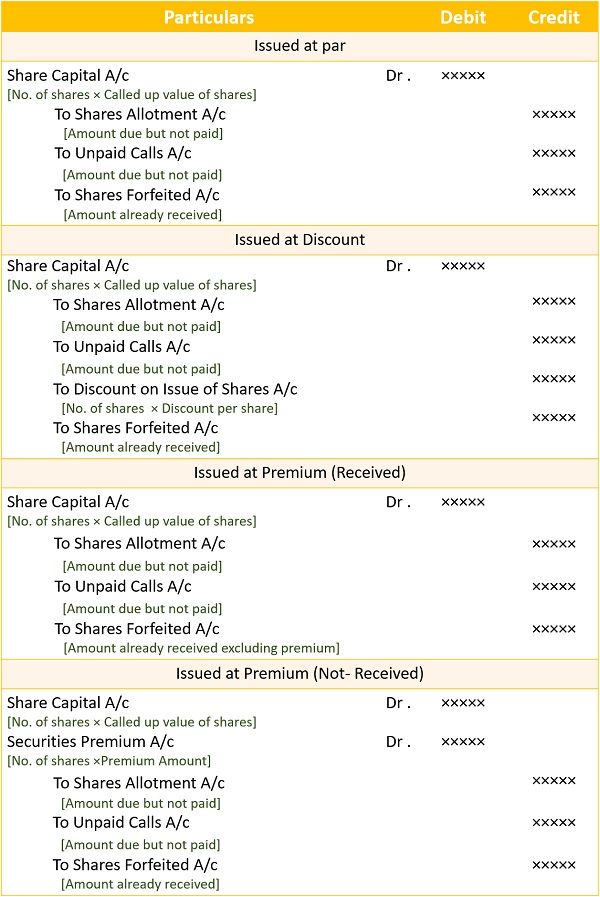 The company can compensate for the loss born due to defaulting shareholders. Consequently, they can again issue the forfeited shares for sale. We refer to it as a Reissue of Forfeited shares.

The authority to reissue the forfeited shares is with the Board of Directors of the company.

The company may reissue these shares at Par, Premium and Discount like fresh issues.

The reissue can be in the following ways: 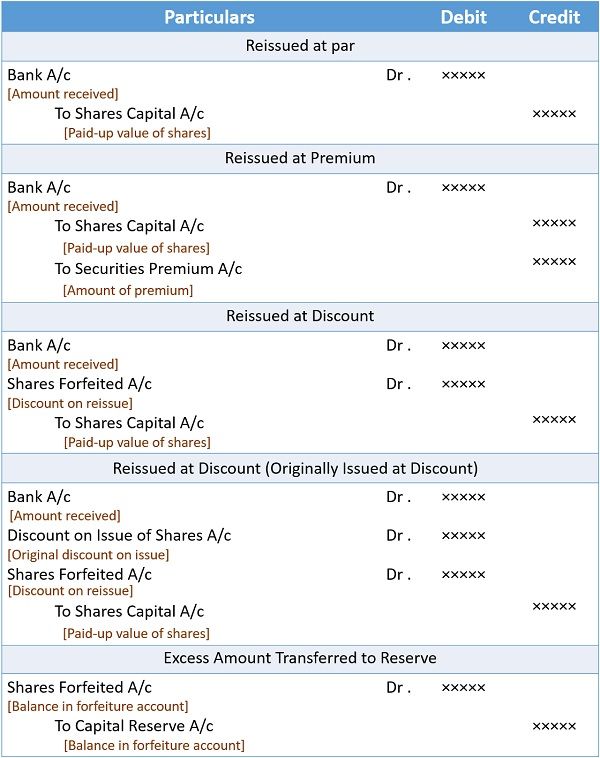 The faulty shareholder may put up a request to cancel the forfeiture of his shares. The Board of directors may discuss the annulment in a board meeting.

They can approve the cancellation of forfeiture only if the shareholder agrees to:

Pro-rata Allotment and Forfeiture of Shares

Pro-rata is adjusting the oversubscription at the time of application into proceeding calls.

During forfeiture of such shares, the company:

The formula for estimating the number of shares applied is as follows:

Peterson ltd. accepted applications for Equity shares of Rs.50,000/-. The face value of these shares is Rs.10/- each, payable as follows:

The company received applications for Rs. 47000/- shares. And shares were allotted to all the applicants.

Amie, the holder of 5000 shares, failed to pay money on the allotment. Another shareholder Bob who owns 500 shares, was unable to pay the call money.

The company decided to forfeit the shares of Amie and Bob. Journalize the transactions in the books of Peterson ltd. 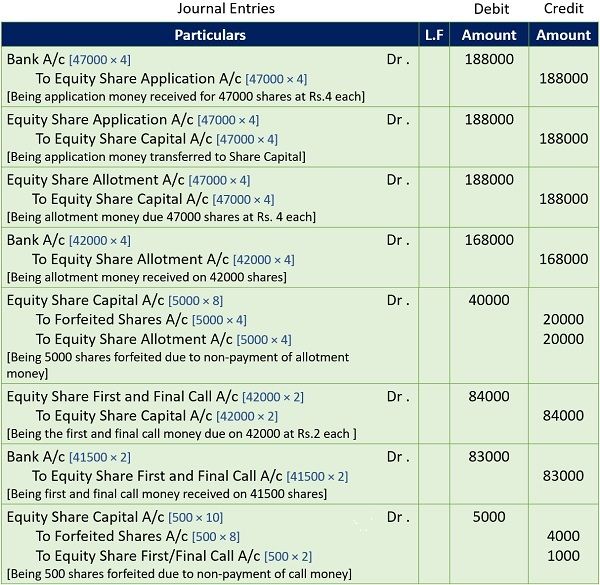 Note: We have shown the calculations along with the Journal Entries.

The company ask shareholders to pay the amount due on calls on time. But when the shareholder cannot make the payment, the company forfeits his shares.

We can understand forfeiture as cancellation or annulment in simple terms. The director of the company may reissue or dispose of these shares. The Articles of Association empower him to do so.

Forfeiture leads to the removal of the shareholder’s name from the register. Also, they lose all their rights as a shareholder of the company.