Definition: Merger is a process of combining two companies or entities to form a third separate company by signing an agreement with a vision of going forward to achieve a respectable position in the market. To achieve the targets that they feel they can achieve together more appropriately by combining their strengths rather than working individually.

However, the merger can be done only when both the companies mutually decides and agrees on the same clauses as mentioned in the agreement. As per the industrial disputes act, 1947, if the employees are working for more than a year his/her rights and benefits, should not be harmed by merger.

Or,  Company A can absorb the company B to manufacture the vehicles so that the cost of purchasing parts from the outside company may reduce and the profit margin will increase.

Mergers can be classified into various types; they are as follows: 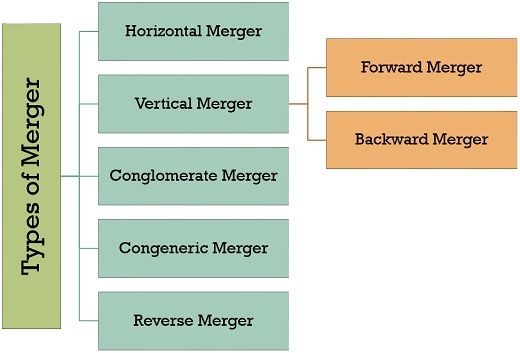 1. Horizontal Merger: Horizontal Merger implies combining two entities of the same industry which are on the same stage. This type of mergers is done to raise the market share and eliminate completion from the market. One of the examples of a horizontal merger is Flipkart has acquired Myntra, here both are working in an online retail space and selling goods, then also Flipkart has acquired Myntra for increasing their market share.

3. Conglomerate Merger: In this type of merger two companies from totally different industries are merged, such as an automobile company merged with a clothing company. The reason behind such kind of merger may be diversification of activities when the companies find themselves drenched in their existing business then they divert themselves towards a completely different business to get advantages from the new business.

However, the biggest risk involves in this type of merger is unknown markets and services as the company has shifted entirely from one market to another.

There are various tenable reasons behind the merger of the companies; some of them are as follows:

1. Synergy: Synergy implies creating something extra by combining two entities by way of reducing competition and cost, and increasing scope and scale.

2. Integral Resources: Companies having integral resources, i.e., interdependent resources generally become much more profitable after the merger. As some companies have innovative ideas but do not have good marketing tactics or reach to the market.

Thus they can be merged with the company having good marketing reach and together can make a separate company with all required elements for creating innovative products.

3. Tax Benefits: Sometimes, companies face accumulated losses for a long period of time because of which they cannot extract tax advantages. However, if the company merges with a profit-making company, their losses can be set off with the profits and tax benefits can be availed.

4. Discharge of surplus funds: Company having sufficient funds after distributing dividends to their shareholders in such case rather than making investments in non-profitable concerns a merger with another firm which seems profitable in future is a good option for utilizing surplus funds.

Merger implies the amalgamation of two entities by way of absorption or consolidation intending to raise the market share and reduce the competition from the market. In absorption, one company gets acquired by the other company; whereas, in consolidation, two companies combine to make a separate new company.