Definition: Public-private partnership (PPP) is a model where the government associates with private companies to accomplish infrastructure projects. This alliance between both the parties, ensure financing, designing, flourishing and maintaining of the infrastructural amenities within the country.

The PPP approach initiates the efficient facilitation of public goods to the people. This is because, such projects are handed over to the relevant private entities, who hold expertise and knowledge in their field.

To understand the PPP concept, we must know its fundamental characteristics. Some of these are discussed in detail below: 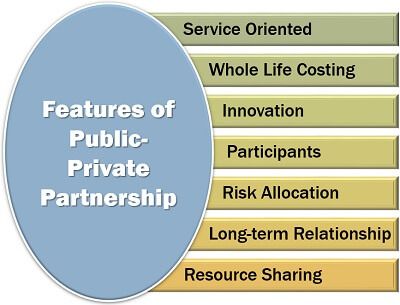 When we talk about the public-private partnership, we come across various ways in which this approach functions. To understand some of the frequently adopted PPP structures, read below: 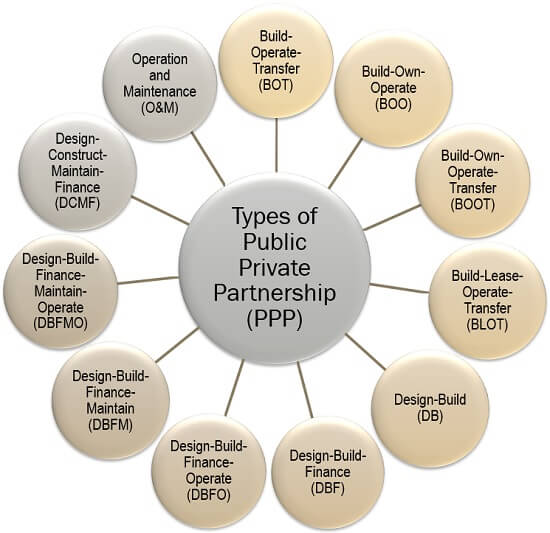 The toll road construction projects are illustrated under this conventional model. The private company construct the road, collect toll or revenue (for the contract period) and then pass its possession to the government.

It is though very similar to the BOT model; here, the possession of the facility remains with the private entity itself.

To recover the cost of construction and incur gains, the private firm, after development, keeps the possession of the facility up to the contract period. After which it passes on the ownership to the public sector.

The private company uses a leased public property to develop a facility. It functions on this property for the lease period to recover cost and earn revenue. Later as the lease expires, the land is handed over, back to the government.

This is the basic form of P3 where the private company layouts and constructs the facility as per the government requirements, after complete risk assessment. In return, it takes a fixed amount as its charges.

The private sector firm undertakes a project to design the layout, build the facility and meet the capital cost involved in such designing and construction.

In the DBFO model, the private company is responsible for planning the project layout, facility construction, arranging the required capital and operating it till the grant period. The facility operations revenue meets the cost incurred and generates profit to the company.

This model can also be termed as a management contract. Here, the public sector entity remains associated with the project from the beginning to the end.

The process starts right from designing of the layout, to construction, funding and lifetime maintenance of the facility. The firm either charges a fixed sum or shares profit; also, it is involved in the project’s managerial decision making.

It is an extended version of DBFO. Here, the private firm prepares the blueprint, builds up the facility, invest the required sum and carry out the operations to generate revenue. Since the company undertakes the project for a long-term, it has to take care of the maintenance work too.

In the DCMF model, the private entity understands the government specifications and accordingly designs, develops, upkeeps and invest in a facility. This facility is then leased out to the government body itself.

This model involves assigning of a sub-contract to the private companies for running and up keeping a facility.

The firms which undertake such projects are experts in maintenance work. Also, the possession of the facility remains with the government body. The revenue for private entities is commonly generated through a performance-based fee. In some cases, the companies charge a lump sum and fixed price for their services.

The PPP approach is highly beneficial for the government, the country, the economy, the private organizations and the public. Given below are some of the prominent pros of this concept: 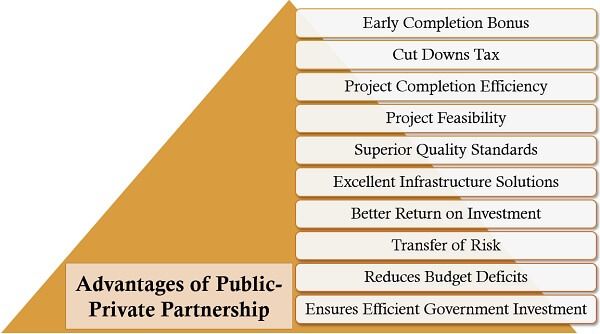 On the one hand, it helps to improve the infrastructure conditions in a country. Whereas, on the other hand, it has the following limitations:

The public relations officer noticed the problem of conveyance between the two villages in her area, which were separated by a river. The only means of reaching the other village was through boats. Therefore, she proposed the bridge construction project in front of the government; to establish connectivity between the villages.

The task being highly complicated, the government decided to go for a PPP approach for this project.

Let us now understand how the project in the above illustration will proceed, through the following significant steps involved in it: 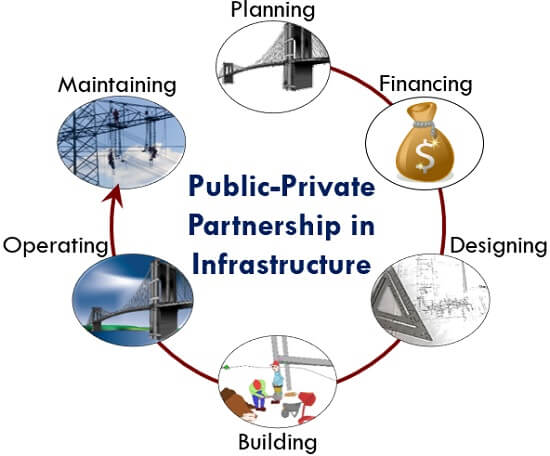 Collaboration is inevitable when it comes to substantial infrastructure projects requiring high investment and expertise.

Therefore, the government prefers to take the assistance of professionals in the field. Here, comes the role of private companies for the accomplishment of such projects.