Definition: Oligopoly is defined as a market structure in which some sellers are selling similar or diversified products. In case when the company sells the same product, it is known as “pure oligopoly”. For example, industries producing petrol, steel, etc. However, when the company of an oligopolistic industry sells a diversified product, it is known as “heterogeneous oligopoly”. Television sets, refrigerators, cigarettes, etc are examples of heterogeneous oligopoly industries.

Bet it pure or heterogeneous,” oligopoly is the most widespread form of market organization in the production sector of the industrial nations.” In non-industrial nations such as India, also, most of the big and small industries have seized the features of an oligopoly market. The market share of 4 to 10 firms in 94 big and small enterprises of India is given in table 1 below:

As, the data displayed in the above table, in India 53 out of 94 selected industries, i.e., in about 60% industries, 4 to 10 firms have a 75% or more market share which provides a concentration ratio of 0.53 or above. All such sectors can be classified under oligopoly.

Along with the deficiency of sellers, most oligopolistic industries have various common characteristics which are as follows: 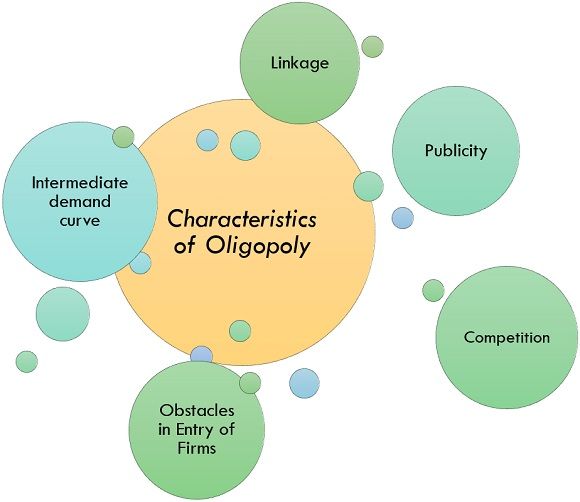 1. Linkage: In the oligopolistic market there is always a recognized relation amongst the sellers. Every oligopolist eccentric knows that changes in its product characteristics, price, advertising, etc can lead to counter-attack by rivals. When sellers are less, every seller manufactures a considerable fraction of the total productivity of the industry and may have an apparent effect on market conditions. He can decrease or increase the price for the entire oligopolist market by selling additional or less quantity and alter the profits of the other sellers. Every seller has a direct and significant effect upon every other seller in the market. Therefore, each move by one seller leads to a counter-attack by the others.

2. Publicity: The leading cause of this collective inter-collection in decision making is that one manufacture’s estate is dependent on the policies and estates of the other manufactures in the industry. It is for this cause that oligopolist companies allocate enough on publicity and consumer services. For instance, if all oligopolists persist in allocating a lot on advertising their products, and one seller does not compare with them, he will discover his consumers gradually indulge his rival’s product. If, on the other hand, one oligopolist sponsor his product, others have to chase him to keep up their sales.

3. Competition: This accelerates another characteristic of an oligopolistic market, the existence of competition. As under, oligopoly there are certain sellers, a move by one seller right away affect the rivals. Thus, every seller is always attentive and keeps a close watch over the actions of its rivals to have a counter-attack. It brings on intense competition based on cost reduction, advertisement quality enhancement, better service/ delivery etc.

4. Obstacles in Entry of Firms: As there is intense competition in an oligopolistic industry, there are no hurdles to enter into or exit from it in a legal sense. Although in the long-run, there are few other kinds of hurdles for an entry that tend to confine new companies from arriving in the industry. They can be:

5. Intermediate demand curve: It’s hard to find the demand curve of an oligopolist’s products as it is complicated to understand the producer’s behaviour with certainty under ownership. Therefore, demand cannot be starved with veracity and accuracy for the oligopolies. It is hard to find how the individual seller’s demand curve resembles an oligopoly as it is risky because of the unpredictable reactions of the seller’s regarding the price-output policies of competitors.

Oligopoly is of the following types: 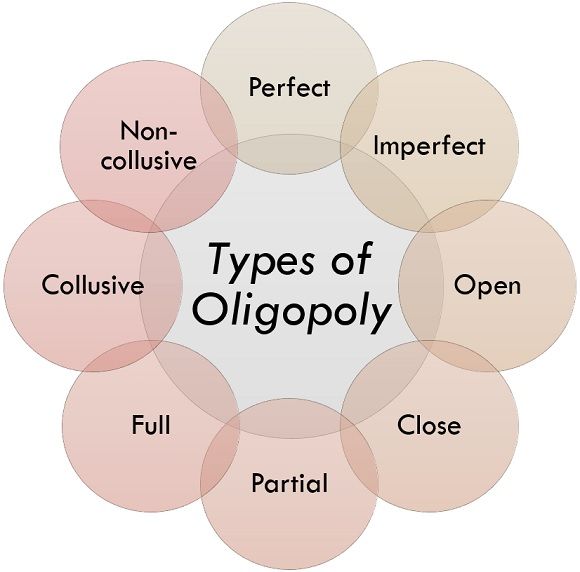 An oligopoly is a market network where there is a limited number of firms in the industry and where every firm is linked with one another. It is a market structure where the various seller sells homogeneous or differentiated products.