Definition: Monopoly is one of the extreme imperfect markets amongst Monopoly, Monopolistic Competition and Oligopoly as it lacks several characteristics of perfect competition and it exists where a single firm rules the industry.

The word Monopoly is a combination of two words in which “mono” implies “single” and “poly” means “seller”. Therefore, the market controlled by a sole trader is said to a Monopoly market.

Monopoly has the following types:

One of the best examples of this type of Monopoly is (OPEC) Organization of Petroleum Exporting Countries.

The following are some of the characteristics of Monopoly: 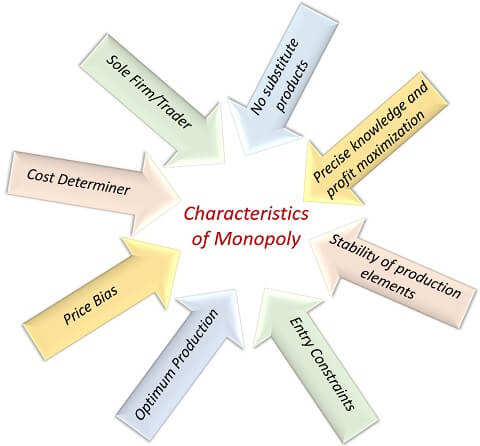 Monopoly market is solely captured by an individual seller or firm of a particular commodity having no competitors in the market, the whole output of such commodity depends upon that firm or trader; thus they form industry with a Monopoly.

As the Monopolist is the sole king of that industry, he also determines the cost of the commodity produced, and there is no one in the market as a competitor who can challenge his price and the value decided by him becomes the final price of that product to sell in the market.

As the monopolist is a sole trader of that commodity in the whole market, he may be biased amidst customers, i.e., can charge more from rich and low from poor customers.

Production in the Monopoly market should be in optimum scale as supply rise may bring fall in the price of the product.

The monopoly firm or trader captures an entire market of the product as they have the patent of that product; thus, no substitute products can be produced and sold in the market by other firms.

Entering in the Monopoly market is restricted for the firms as the monopolist has captured the market with his specialities, hence other firms cannot compete with them, and for the Monopoly firm it is obligatory to have a patent for surviving in the market.

All the elements of the production are not always movable, which becomes one of the essential components behind the monopolist command on such resources.

No one can copy such factors or combination for the production, and hence chances of deposing monopolist become negligible.

The monopolist learns perfectly about the market conditions to avoid the uncertainties of the future, and their main aim is to maximize the profits of the firm.

There are various firms in the monopolistic market; some of the examples of such Monopoly firms are as follows:

They owned most of the diamond mines all over the world covering most of the African mines since 19th century, and they had become a single raw diamond seller since late 19th century to almost the beginning of the 21st century.

They maintained their position as the largest owner of the raw diamonds through their various business strategies, and that is how they ended up being the single largest seller of raw diamond and able to attain Monopoly status in the market for raw diamonds.

However, there are various operating systems available in the market such as Linux, Unix, but they are not as much user friendly as windows.

Thus, windows cover almost 90% of the market, which made the Microsoft Monopoly player in the market for operating systems.

As pharmaceutical company invests a lot of money in research to come up with new drug formulas or new compositions, as they are spending a lot of money for it and the end result may or may not bring any results to them which creates a vast sunk cost for the company.

To overcome the fear of loss, patent laws are followed, which gives protection to such pharmaceutical companies that if they come up with a very useful composition, they will get a Monopoly power for that composition for some time.

Monopoly is a single seller market in which no substitutes are available and have the market power to influence the selling product’s market price.

The Monopoly rises because of government licensing, patent rights, cartels and control on raw materials.