Definition: Demand Curve is a precise set-up to describe the relation amidst price and quantity demanded. It is a graph representing the relationships between the price of a product and the quantity of product that customers are pleased with and ready to purchase at the given cost.

Demand Curve is drawn on the presumption that all the other factors of demand indexed earlier are retained consistent.

In figure 1 below, the demand curve is drawn on the basis of data scheduled presented above. 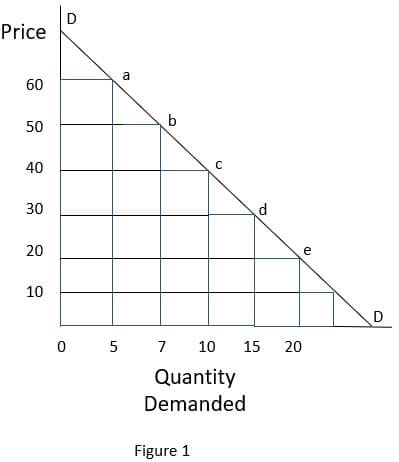 Point “C” determines that when the price of a good is ₹ 40, the quantity demanded by the customer is 10 units. Similarly, assembling all five-point, i.e., a, b, c, d and e indicates the entire demand curve, which displays the perfect functional relation amidst price and quantity demanded.

Why the demand curve tilts downwards?

Earlier, the cardinal utility was the base of demand analysis. The demand curve tilts downwards primarily because of the law of diminishing marginal utility. In accordance with this law, an increased unit of product delivers low satisfaction. The customer will repeatedly see to relate the price of the product with the marginal utility he/she obtains from it. i.e., the customer will try to achieve the following symmetric situation at each point on the demand curve.

As, according to the law of diminishing marginal utility, each supplementary unit gives lower utility compared to the earlier units, the customer is inclined to pay only a lower price when he steps down the marginal utility curve as shown in figure 2(a) below. 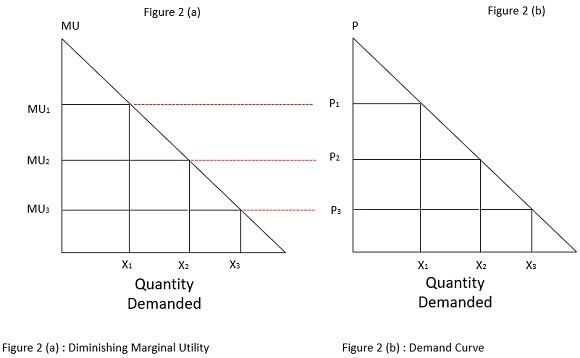 Thus, the customer will purchase only when his symmetric situation is fulfilled. As displayed in figure 2(a) and figure 2(b) above, the demand curve tilts downwards as the marginal utility curve, and the customer is at symmetry at points where

Shift in the Demand Curve

If there is a change in demand because of elements, other than price, it is known as an increase or decrease in demand as the case may be. Corresponding changes in demand are displayed by depicting a demand curve to the right or left of the original demand curve; thus, it is termed as “Shift in the Demand Curve”. In the case of a rise in demand, there will be a rightward shift in the demand curve. It displays only quantity at an identical price. In the case of a reduction of demand, there will be a leftward shift in the demand curve. It displays a similar lower quantity at an identical price. Both the conditions are illustrated in figure 3 below, shifting from DD TO D1D1 (rightward) displays risk in demand and shifting from DD to D2D2 (leftward) displays the reduction in demand. 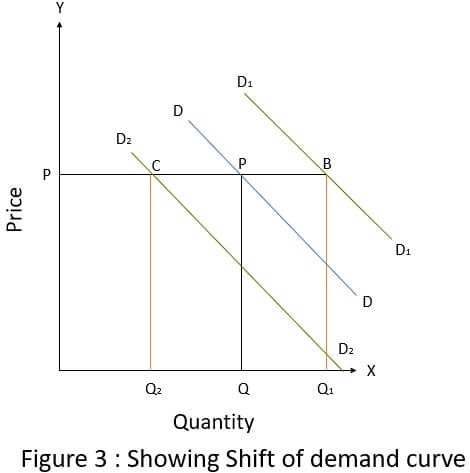 Movement Alongside a Demand Curve

If the quantity demanded rises or reduces because of fall or hike in the price of a product alone, it is termed as extension or contraction of demand. It is a case of movement along a demand curve. In case of extension of demand, we move from A to B, i.e., downward. And in the case of contraction, we move from A to C, i.e., upward, along with the same demand curve as displayed in figure 4 below: 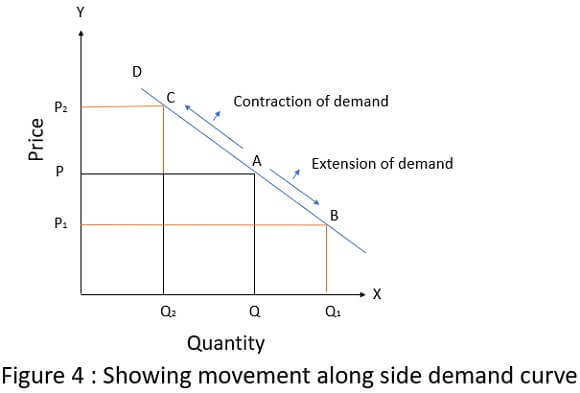 Earlier, it has been simulated that demand means demand for a commodity in a whole market. i.e., Market Demand. However, it is desirable to construct individual demand curves and extract market demand curves from them. An individual demand curve is the demand curve of an individual entity; this could be a customer, a company or a government. The factors of demand for a single entity are not distinct from these market as a whole. When prices increase, there is a decline in the demanded quantity of the commodity, when income increases domineering that the commodity is a normal good, demand will rise.

A demand curve is downward tilted, displaying that the lesser the price, the greater will be the quantity demanded of a product or commodity. The demand curve is drawn on the presumption that all the other factors of demand indexed earlier are retained consistent.