Definition: A market structure can be understood as a system for categorising the products and services offered by the firms, according to the nature and level of competition in the market. A ‘market’ in economics is an actual or virtual area where sellers and buyers communicate to carry out trade activities is known as a market in economic terms.

You must be wondering, How these market structures are determined? What are the factors involved in it?

The market type for any product or service is decided by the following factors: 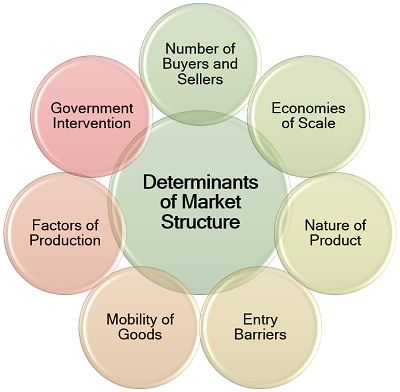 Based on the above determinants, the market structure can be classified into four broad categories.

These are explained in detail below: 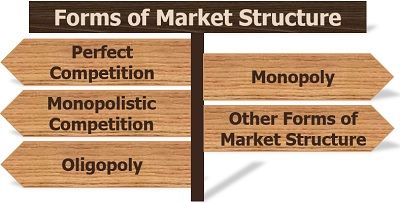 It is a market in which many sellers are present to sell the same kind of products at the same market price to a large number of buyers.

For Example; the farmers’ market can be seen as the most common examples of a perfect competition market. Here, all the sellers are engaged in selling identical products at a single price.

The market which is solely occupied by a single seller offering products which have no other competitive product is known as a monopoly market.

For Example; Reliance Jio is ruling the Indian telecom industry solely because of its affordable plans and idea of a digital revolution.

A market where a large number of sellers trade in differentiated products to meet the requirement of many buyers is known as a monopolistic competition market.

It is a combination of perfect competition and monopoly and depicts the real market situation of the present era.

For Example; a company producing cooking oil has a differentiated product which it has to sell at a competitive or reasonable price to the buyers.

Oligopoly is a market where there is a limited number of sellers who are engaged in selling similar or distinct products. The firms that deal in identical products are termed under homogeneous oligopoly.

Whereas, the firms which deal in products that differ in one or the other way from its substitute, lies under the heterogeneous oligopoly.

Other Forms of Market Structure

Other than the above-market types, there are some other forms of the market too. These are classified as follows:

Duopoly: In a duopoly, the market is majorly captured by two sellers who work unanimously. They are competitors but together decides the price of a product.

For Example; Once, the brands like Apple and Microsoft formed a duopoly market for personal computers.

Monopsony: A monopsony market is just the opposite of the monopoly market. There is a single buyer in a monopsony market who has the power to influence the price of the product. It is most commonly seen in labour markets.

For Example; country towns are well-known examples of a monopsony market. One of these is Minto city, British Columbia, where most of the localities are involved in gold mining activities.

Duopsony: A market where there are only two significant buyers of a product is termed as a duopsony market. They usually determine the product demand and rules the product price in the market.

For Example; In a share market, two major companies buy the stocks of other small companies affecting their market value.

Oligopsony: There are some products which are bought by a few buyers only, such markets are called oligopsony. The prices are somewhat controlled by the buyers in such cases.

For Example; the seasonal crops harvested by farmers in areas where there is a lack of transportation will be bought by few buyers, say nearby factories to process it into a finished product.

Each type of market has distinct features which differentiate it from the others. The following table illustrates the clear discrimination among the different forms of the market by their features:

Perfect Competition is a market where a large number of small firms compete by selling similar products at the same prices (prices determined by the market) to earn a low-profit-margin. The firms freely enter and exit, and there is no government restriction.

In monopolistic competition, several small firms sell distinct products at a different price. They aim at moderate profits in a reasonably competitive market where the firms are free to enter, and exit and government don’t control the market activities.

Oligopoly is the market with a few large firms, offering homogeneous or differentiated products at high prices in a less competitive market. The government exercise some control over the business activities and entry of firms is quite restricted.

In a monopoly market, there is a single large firm offering a unique product which has no other competitive product available in the market. The firm thus creates product based leadership and high profitability.

The entry of other firms is highly restricted, and government exercise complete control over the activities.