A general example for which the local government issues municipal bonds is the maintenance of roads, building schools, building airports, and various infrastructure, etc.

The following are the types of Municipal Bonds: 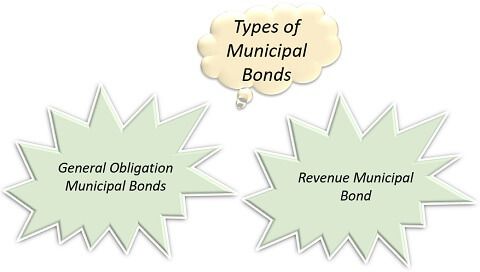 These bonds are issued by the municipal authorities of the small-scale towns of big states to tax their divisions whether the investor is big or small, every investor finds these bonds beneficial. Maintaining and running public projects such as road maintenance is the main objective of issuing general obligation bonds, and these bonds are also considered to be safer than the revenue bonds in the secondary market.

Dedicated real property taxes, as well as general funds, secures such bonds and these bonds must contain the issuer details fully described, i.e., how much debt is issued by the issuer. These bonds may be distributed amidst two parts, i.e., unlimited tax general obligation bond in which the taxes are rated without limit with the intention of regulating the bond debts. And the other is the limited tax general obligation bond in which the issuer of the bond charges tax only up to a definite limit.

These bonds are issued with the intention of getting paid off by the amount generated by the project for which the finance has been issued and can be issued by any government agencies having their own operating income equivalent to their operating expenses. Some entities who can issue such bonds are non-trading organizations and public service bodies like transport authorities.

Following are some of the advantages of the municipal bonds:

Many of the investors choose municipal bonds as they provide tax benefits, unlike most other fixed-income investments. Interest payments of these bonds are exempted from federal taxes and possibly exempted from state or local taxes too depending on your location. While municipal bonds generally offer lower returns than corporate bonds, but its interest is usually tax- free. This unique feature of municipal bonds can make them more attractive and more profitable investment than other bonds.

Here the question arises which investment is better for an investor?

The answer to this question is depends upon the tax bracket and the state in which investor lives in.

For example, suppose our investor comes under federal tax bracket that deducts 30% of all her investment earnings. The investor does not need to pay taxes on their municipal bonds returns as it is tax-free. If this bond has a face value of 3%, a tax-equivalent return is around 4.09%. Additionally, supposing our investor lives in a state where the return is also state tax-free the benefit would be even greater.

Like other bonds each municipal bond is assigned a rating by a third party agency, these ratings help the investors to know how risky a bond is, higher rated bonds (AAA) are less likely to default than lower-rated bonds (B). However, safe investment typically generates a lower return. In addition to buying individual bonds, an investor can also buy a municipal bond by purchasing shares of bond funds then invest in several municipal bonds.

Municipal bonds dealers are those who provide financial services in order to raise money in the market. Following are some of the departments in which such dealers often found:

Public finance plays a role of an investment-banking arm in a municipal bond business; they generally deal with existing clients as well as expands new business with various issuers.

The prices and returns are set by the underwriters on new issues, an underwriter purchases bonds from the issuer in two ways:

It defines the buying and selling of bonds to other investors by the traders who are aware of all the bonds available in the municipal market.

In sales, the salesman maintains direct contact with the investors; they conduct a meeting with underwriter and traders and look for opportunities to serve investors in the secondary market.

Municipal bond dealers give more weightage to the creditworthiness of the issuers to reduce the problems and challenges faced in the municipal market.

A municipal bond is a certificate issued by the local government or agencies to the lenders along with interest till the date of maturity of the bond. However, these bonds provide less rate of interest but still are beneficial as the interest income earned from them is exempted from tax.