Definition: Money Market acts as an essential part of economic development. It is concerned with that portion of the financial system where trading of the short-term fund is done for a period of less than 1 year. It is a product of the capital market, which is treated as a channel of short-term debt capital. Although it is undoubtedly distant from the capital market, money market deals with short-term call and notice deposit, promissory notes, government papers, short-period bills, etc.

Following are the functions performed by the Money Market: 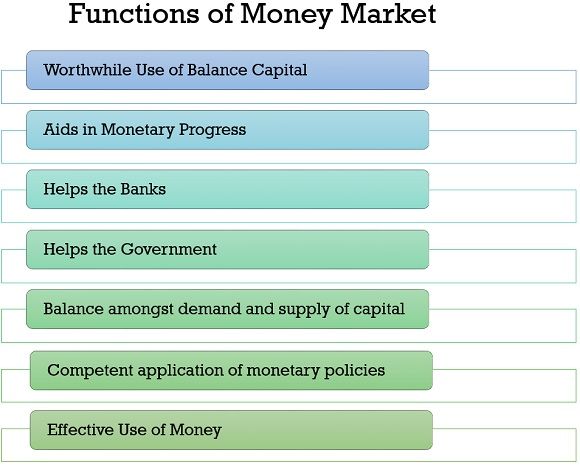 It facilitates to use of the balance capital funds efficiently for a short period by the financial as well as the non-financial institution and the government.

For fulfilling the working capital requirements of the various financial institutions, a money market provides short-term capital to them. It boosts the expansion of commerce, industry and trade by discounting the trade bills by way of commercial banks, acceptance houses, brokers, etc.

The commercial bank rather than borrowing from the RBI can borrow some loans from the existing money market, as the interest rate of the money market is lower than the RBI, which saves the cost of the bank.

By issuing Treasury bills, the government can obtain short-term capital from the money market at a minimal rate of interest rather than financing from RBI.

By way of transfer of savings into investments, the money market grants money to be used in a balanced way which maintains the balance amongst demand and supply of the capital amount.

Money Market aids the development of commerce and industry as it manages the money assets and money can easily be relocated from one place to another.

The following are some of the instruments of the Money Market: 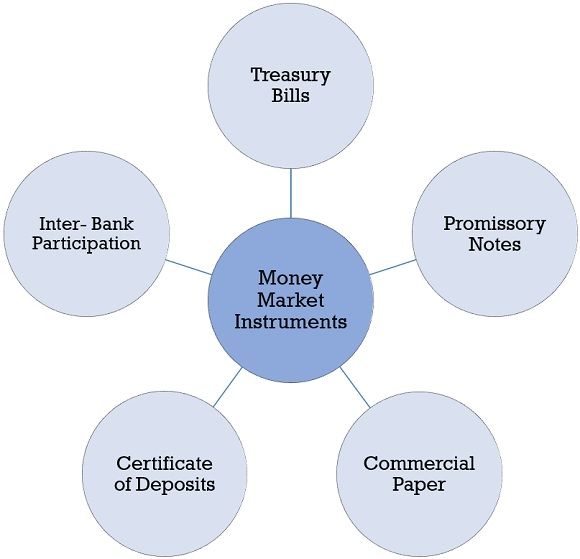 Treasury Bills are the preeminent instrument of the Money Market which are issued for less than 1 year, i.e., for 91,182,360 days. The Central Government issues them for providing short-term capital to the market. It can be issued as ordinary or ad hoc treasury bills and any individual who is a resident of India can purchase such bills. Banks may convert their statutory liquidity ratio held in the form of treasury bills into cash as and when required for cash reserve ratio obligation.

It is a written promise by one person to another to pay a certain amount at an acknowledged period of time mentioned in a note. In general, a promissory note is signed for 90 days plus 3 days of the grace period. It is drawn by the debtor and must be acknowledged by his bank, so that creditor gets it discounted directly from the bank on the due date.

Commercial Papers are the short-term liability issued by highly ranked companies to lenders for recent fund received from them. Companies having a minimum net worth of ₹ 4 crores can only raise the commercial papers for a minimum of 7 days and a maximum of 1 year of time. It is issued in the form of the customed promissory note at a discount to face value.

Certificate of Deposits is the receipts issued by the financial institutions for a particular time at a fixed interest rate. These certificates can be issued with a minimum size of 5 lacs in a multiple of 1 lac for a minimum period of 7 days and a maximum period of 1 year. They are issued at the rate driven by the market forces at a discount to face value, here the stamp duty has to be borne by the financial institutions.

The bank has to decrease its advances or need to raise its deposits if it has an extensive credit deposit ratio, which can be done by decreasing the advances for some-time by granting permission to other banks to participate in its classified advance. For which a participation certificate is issued to the participating banks. Inter-bank Participation Certificates are issued:

Money Market is important for the economic growth of the country. The importance of it can be described more clearly below: