Definition: Commercial Bank is the banking platform for the general public and is described as an institution whose primary business is to act as an intermediary for the purpose of settlement, i.e., receiving deposits and giving loans. These banks in India are formed as joint-stock firms and recognized as banking firms.

The second schedule of RBI Act incorporates a record of the bank which are specified as “scheduled banks”. A bank to be nominated as a scheduled bank must have a paid-up capital and reserves as recommended by the Act. According to section 42(6) of RBI Act, 1934, the obligatory amount is only 5,00,000. Yet, in a short while to start a commercial bank, The Reserve Bank of India recommended the least capital of 100 crores and its business should be handled apparently, which in the assessment of Reserve Bank of India, is not damaging to the interests of its depositors.

The scheduled banks are also needed to manage with the RBI a deposit in the form of CRR (Cash Reserve Ratio) established on its demand and time liabilities at the recommended rate. Scheduled banks involve nationalized banks, thus it is necessary to understand the concept of a Nationalized bank.

Non-Scheduled banks are those banks which are not the part of the 2nd scheduled of the RBI Act. These banks are not well-known by the general public in comparison to scheduled banks, as they are less popular. Many facilities are also not available in these banks such as refinancing, discounting of bills, etc. In a matter of security also, these banks are much less secure than commercial banks as they do not have to follow guidelines given by the RBI.

The functions of the Commercial Banks are basically divided into two parts, i.e., primary and secondary function. They are as follows: 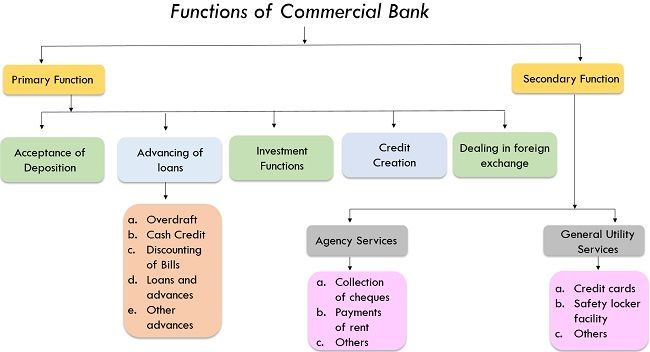 The primary functions of such banks are as follows:

Time deposits get matured after a certain period and cannot be withdrawn by draft, cheques or by other means. These deposits include:

Commercial banks grants loans and advances in distinct forms. They are as follows:

It is one of the most important primary function of commercial banks. When a bank approves a loan to the client, the bank won’t give cash. However, a deposit account is opened in a bank with the client’s name, and the sum is credited to this account. He can withdraw the amount as and when required by him/her. In such a way, the bank raises the money supply of the economy and such function is termed as “Credit Creation”.

The secondary functions of the banks involve agency functions and general utility functions. Here, we see the overview of these functions:

These functions consist of the following:

These services consist of the following:

A commercial bank is outlined as one whose primary business is financial intervening such as taking deposits and providing loans. Clients of these banks involve small companies, person, or large companies.