Definition: A commercial paper (CP) can be viewed as an unsecured, short-term and negotiable money market instrument. It is issued by the companies with good credit rating to acquire quick working capital to meet its short-term liabilities like paying off bills or maintaining inventory. The issuing company promises to repay the borrowed sum on or before the mentioned maturity date with a specific return or interest to the investor.

The issuing company does not need to register a commercial paper with the Securities Exchange Committee (SEC) since it has a short-term maturity period, i.e., less than a year.

The corporates need to determine the cost associated with the issuance of a commercial paper. Even for the investors, it is necessary to find out the proposed profits of CP.

For this purpose, we can compute the following:

Calculation of Interest Rate on CP

The first thing we need to ascertain is the rate of interest which the company will pay, and the investor can earn on a commercial paper.

The formula for calculating the rate of interest on commercial paper is as follows:

Net Amount Realized: The net amount realized by the borrowing company is the amount which is received after deducting all the related discount and charges. These charges include stand by facility charges, stamp duty, dealing bank fee, agent charges, credit rating charges, etc.

The formula to determine the net amount realized is:

The final cost incurred by the company on issuing a commercial paper, after adding up the brokerage and deducting any profits earned through the acquired funds, is termed as the net cost of CP.

The formula for finding out the net cost of CP is:

Interest on CP: The interest charged on the commercial paper, payable by the issuing company to the investor is the interest in CP.

Following is the formula to determine the amount of interest charged:

Additional Return on Investment: Sometimes, the companies issue a commercial paper for more than the required number of days and accumulates the refundable sum much before the mentioned maturity date.

In such a situation, companies take this additional period as an opportunity to make some extra money from the available funds by investing the amount into short-term gain schemes like market securities.

For finding out this additional return on investment, the following formula is given:

A business entity issues a commercial paper worth ₹1000000, which will be redeemable after completion of 100 days. If the discount is 1% and other charges worth ₹15000 were applicable. Find out the rate of interest on this commercial paper.

Also determine the net cost incurred by the organization, if brokerage charged was 1%. The company utilized the sum for 70 days only, and the remaining 30 days, the amount was invested in the share markets which yield returns @ 21% p.a.

What exactly is a commercial paper? What are its characteristics which differentiates it from other financial instruments?

A commercial paper is a convenient means of short-term fund acquisition for the companies and profitable short-term investment for the investor.

Let us now have a look at the various features of a commercial paper: 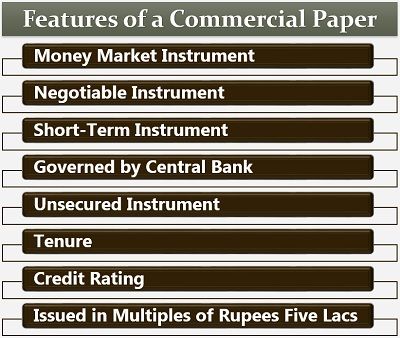 Money Market Instrument: The banks, companies and the government can avail enormous funds for a short-term period at a low cost, through it. Thus these are considered as money market instruments.

Negotiable Instrument: It is a form of the negotiable instrument where the payer’s name, sum borrowed and maturity date are mentioned clearly. Thus, establishing a future promise to pay a certain amount by the payer to the bearer of the instrument.

Short-Term Instrument: A commercial paper is a short term investment since it is redeemable within one year as per its maturity date.

Governed by Central Bank: The central bank (i.e., RBI in India) controls the transactions of the commercial paper. This is because of the facts that these are unsecured instruments and are mainly used in the banking industry.

Unsecured Instrument: This type of instrument is generally not backed by collateral or any security of repayment by the company; therefore, it involves a higher level of risk.

Tenure: As we have already seen that the commercial paper is a short-term instrument, the maturity period needs to be more than seven days or less than than a year.

Credit Rating: Credit rating analyzes the credibility of an individual, firm, bank or government body. Thus, only those entities which have a high credit rating determining their ability to pay back the borrowed sum are allowed to issue a commercial paper.

Issued in Multiples of Rupees Five Lacs: In India, the minimum value of a commercial paper is ₹500000, and it is always issued in the multiples of this value.

A commercial paper includes all those financial instruments which are issued for a short term period and yields interest for the investors. The most common forms of CP are the bill of exchange, promissory note, cheques, certificate of deposit, etc.

Let us now understand each of these CPs in detail below: 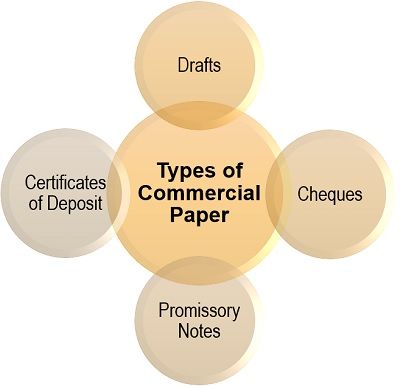 Any commercial bank can issue a certificate of deposit (only those which matures within one year). It is though similar to a savings account; the interest yield is quite higher than that of a savings account. In a CD, the amount is blocked with the issuing bank, and the depositor cannot even withdraw the interest, till the maturity date.

A cheque is that commercial paper which holds an unconditional order duly signed by the bank account holder to pay on demand to or to the order of the instrument bearer, the mentioned sum, on or after the specified date. The different types of cheques include self, post-dated, crossed, bearer, open, order and traveller’s cheques.

A draft refers to a written unconditional order made by the buyer (payer or drawer) to direct the drawee (i.e., the bank where the payer holds an account) to pay the specified sum to the payee (seller or creditor) on or after a specific date or period.

A promissory note is that commercial paper which holds an unconditional promise made by the drawer to pay off a certain amount specified on the instrument, to the drawee or his/her order, on the mentioned date or the demand of drawee.

There are numerous benefits of issuing a commercial paper to the companies, and at the same time, it is a good investment idea for the depositors.

Following are some of the significant advantages of a commercial paper: 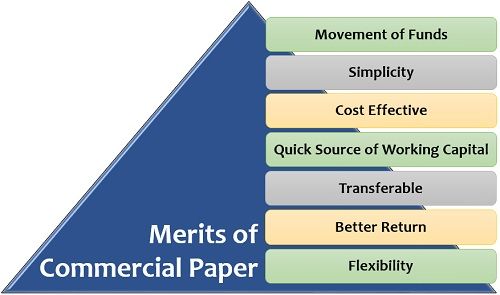 A commercial paper is not always beneficial; it may even lead to loss due to various reasons. One needs to be cautious while investing in any money market instrument.

Let us discuss the various shortcomings of a commercial paper:

In India, a commercial paper came into existence in 1990 and was regulated under the governance of the Reserve Bank of India (RBI). It is mostly available in the mode of a promissory note.

The aim of introducing this money market instrument was to empower the corporates to obtain immediate funds for working capital as well as multiply the sources of short-term borrowings. It also added on to the investment portfolio of the investors and depositors.

Following are the precise terms and conditions which the issuing companies need to fulfil to issue a commercial paper in India:

A CP can be issued in the value of ₹500000 or its multiples, and the company has to issue it within two weeks period from the date of opening.

The Issuing and Paying Agent (IPA) for a CP is always a scheduled bank. Moreover, a CP is available for active exchange in the Over The Counter (OTC) market.

Anyone can invest in the commercial paper, including the individuals, corporates, banking companies, non-resident Indians (NRIs), etc.

The foreign institutional investors (FIIs) are though allowed to invest in Indian CPs; their assess have been limited from time to time by the Securities Exchange Board of India (SEBI).