Importance of marginal cost is to determine the profit of spending access money over variable cost; thus, it helps in decision making for the company.

Anita is a Chartered Accountancy student and she uses to go to a coaching centre 8 km away from her home at the location (A) for taking coaching classes.

Batch for the classes started on 01/07/2020 and Anita is taking classes for accounts and indirect taxes, for which coaching centre charged rupees 15,000 per subject, i.e., total 30,000 rupees has been charged by the coaching institute for providing coaching of two subjects.

Both the subjects are taught in the same location, i.e., location (B).

It clarifies that the coaching fee is a variable cost as an increase or decrease of the subject will vary the cost.

It signifies that the change in variable cost by increasing or decreasing one unit is a marginal cost.

The other aspect of the transaction if fixed cost, let us take a look on it, Anita spends 5,000 rupees/month as a fuel expense.

However, marginal costing does not get affected by the fixed cost.

Therefore, to find out the marginal cost total cost should be divided amidst fixed and variable cost.

Let us take another example from the business point of view.

Here, the extra cost incurred on manufacturing one extra unit is a Marginal cost for the manufacturer, whereas overall labour cost (50,000+50,050) is a variable cost.

Marginal costing has an ability to manage the administrative tasks and decision-making process of the management.

It is advantageous for the management in various aspects such as: 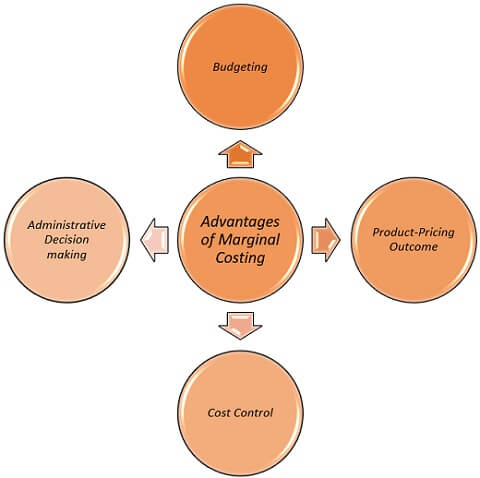 It helps in gathering cost data for profit planning from the accounting statements.

It analyses the cost-volume relation by segregating fixed and variable costs and appraises the profits emerged because of increase/ decrease in the volume.

In numerous cases marginal costing serves as the basis for making product-planning decisions for the short-run.

It is more beneficial than absorption costing for the management, and other than normal circumstances, when it is desirable to take orders, is determined by the data gathered from the marginal income statement.

However, product pricing is a long-run decision and hence cannot be based on only fixed or only variable cost; thus, it is to be made on the basis of the total cost incurred in the production.

The relation amidst period cost and net income can be analysed with the marginal costing. To control the cost of the company variable and period costs are separated, which helps the management to learn the use of standards and preparing budget.

Based on the division of cost into a fixed and variable cost, marginal costing provides aid in preparing reports for all the departments of the company.

For acquiring and analysing the cost, a framework is provided by the marginal costing explaining whether the cost is variable or fixed, which becomes the basis for the proposed changes in the production levels regarding contraction.

The accumulated figure of the marginal income statement is a valuable figure for the administration for calculating net income increments followed by sales increments.

The following are the disadvantages :

Marginal Costing is a method of finding the product’s cost after reducing the fixed cost from the total cost, i.e., it is a technique used by the management for making decisions for the company showing the changes in the behaviour of cost with the change in unit.