Definition: The theories of selling implies to the behaviour of the salesperson towards the prospect or the customer, which ensures the active sale of goods or services. The selling theories gained significance due to the emerging role of the salesperson in marketing since a seller acts as a marketer too.

Building a strong relationship with the customers is essential for the salesperson to create the brand image since he/she is the face of the company.

Selling: Selling is the exchange activity carried by the organizations and individuals to fulfil the needs of the consumers to earn profit in return.

Salesperson: The one who represents the company in front of the customers and is responsible for the sales of goods or services, is known as a salesperson.

Prospect: The prospect refers to the lead or prospective customer whom the salesperson needs to convince for closing a sales deal.

Let us now understand the different selling theories in detail below.

The salesperson’s application of the correct stimulus with the appropriate efforts for acquiring the desired response from the prospect is defined as the stimulus-response theory.

Given below is the diagram, which clearly explains how this model functions: 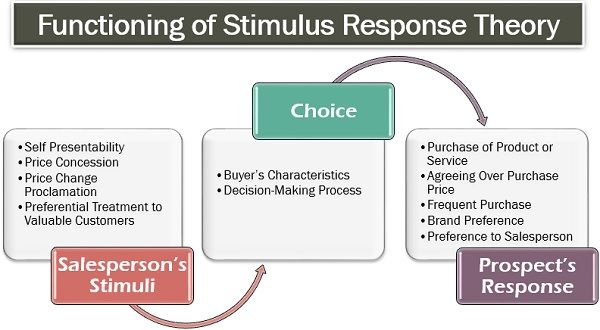 Following are the four essential actions or stimuli over which the salesperson holds a command and can modify according to the situation, are as follows:

There are certain limitations due to which this theory was criticized. Some of these are as follows:

In simple terms, the stimulus-response theory enlightens the repetitive actions of a salesperson which initiates the customer’s positive response towards the product or service.

Therefore, in such a situation, the product-oriented selling style is adopted, where the salespeople need to spread awareness about the product by specifying its features, advantages, benefits and usage, to the prospects.

It is believed that this strategy will not only make the prospect familiar to the new product but may also motivate or pursue him/her to purchase the product.

Here, the customer is targeted indirectly with slight influence through motivation. This theory is usually applied in organizations dealing in software projects, computers, machinery, pharmaceutical, etc.

The following image represents the working of product-oriented selling theory: 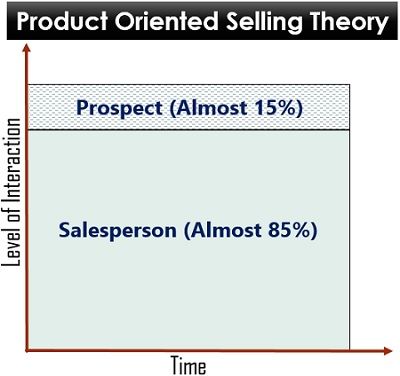 In the above diagram, the maximum i.e., almost 85% of the time, interaction is carried out by the salesperson, where he/she explains and presents the product features in front of the prospect.

The only drawback of this theory is that, if the salesperson fails to understand the present need of the prospect, or is unable to associate this requirement with the benefits of the new product; then the buyer won’t show any interest in purchasing the product.

The need satisfaction theory brings forward an interactive approach or a win-win assumption, where the prospect and the salesperson communicate with each other to ensure mutual satisfaction of both the parties.

The salesperson enquires and understands the requirements, wants and expectations of the prospect and then presents a suitable product to achieve consumer satisfaction.

Here, the salesperson gets a chance to associate the product features with the prospect’s needs and desires. The salesperson has the power to convince the buyer by highlighting the benefits the product will generate to satisfy his/her specific requirements. In this approach, even the prospect feels valued and listened.

The process of need satisfaction theory can be identified through the following three steps: 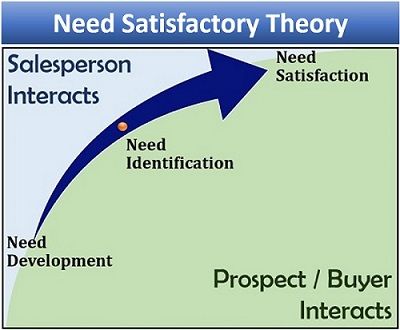 The initial phase of this theory emphasizes on generating the need for the product. The salesperson interacts with the prospects to take feedback about their contentment with the former products along with proactive enquiry of their present needs and requirements.

This step helps to gather sufficient information on what the consumer wants and past product performance.

In the next step, the salesperson sums up the information collected in the development stage and thoroughly analyzes the needs of the prospect. Then he/she confirms this requirement with the buyer, to ensure complete understanding and clarification.

The last stage is all about meeting the buyer’s needs appropriately. The salesperson prepares a complete presentation on the product offering and its features which have the potential of meeting the identified needs and wants of the prospect.

The salesperson also exhibits his/her interpersonal skills by resolving the queries and doubts of the buyer. Thus, finally convincing him/her to purchase the product.

It is a customer-oriented approach where the priority is given to building a long-term relationship with the consumers rather than just selling the products.

Some may say that selling was a traditional concept, but in reality, it is an inseparable part of marketing management. Understanding its different theories provide the power of healthy market acquisition to the organizations.