Definition: The bureaucratic management theory, introduced by Max Weber stated that to manage an organization efficiently, it is essential to have a clear line of authority along with proper rules, procedures and regulations for controlling each business operation. Bureaucracy refers to the possessing of control over a group of people or activities through knowledge, power or authority.

This theory focuses on the following two primary criteria:

Max Weber and His Bureaucracy Theory

Max Weber (1864-1920) was a German sociologist and a political economist, and he came forward with the concept of bureaucracy in management.

Weber believed that there could be only three kinds of power in the organization:

Thus, Weber developed the bureaucratic management theory, where he emphasized on a formal organizational structure. Ia proper hierarchy is maintained, and hence a clear set of six principles were framed. 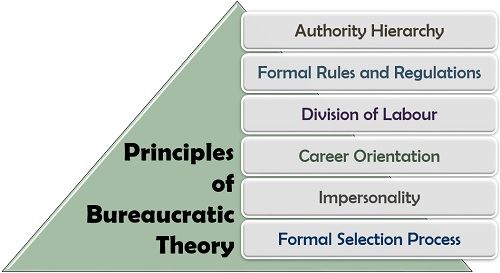 There should be a clear set of principles, procedures, rules and regulations in written form, to be followed universally by everyone working in the organization irrespective of their position.

The whole work should be assorted into smaller task sets to ascertain that every set of tasks is assigned to the right person, i.e., the one who has the capability of fulfilling it. This not only improves the work efficiency but also ensures proper allocation of job responsibilities.

Another essential principle is that management should motivate employees to build a long-term career in the organization by providing job security and performance-based incentives to them.

In an organization, the impersonal relations develop among the employees, which may lead to favouritism or nepotism. Weber said that the application of rules and managerial decisions should be impartial and independent of such relations.

Moreover, these decisions must be based on rational and practical grounds rather than emotional or impersonal influence.

Weber believed that the workers should be recruited through their technical skills and expertise instead of ‘first come first selected’ basis. Even the promotion should be based on performance and merit. This not only leads to better productivity but also adds to employee’s growth and satisfaction.

Weber’s bureaucracy theory has been widely applied in the era of the 1900s by the business entities, government organizations and political associations.

The benefits of this approach are explained in detail below: 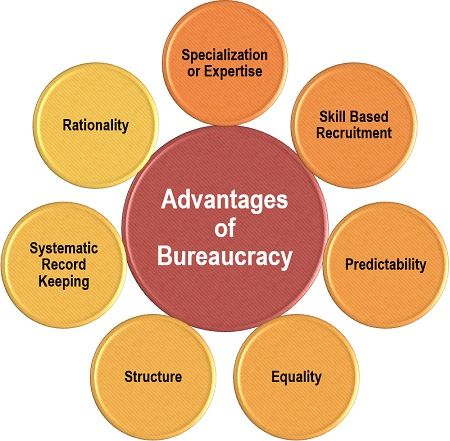 Specialization or Expertise: In bureaucracy management, the work is divided among the employees according to their skill, capabilities and expertise, which results in job specialization in the organization.

Skill-Based Recruitment: The employees are recruited by matching their skills and experience with that required for the vacant job position to ensure that the right person is placed at the right job.

Predictability: When there is a systematic hierarchy and defined rules and methods of performing the complicated tasks in the organization, actions in similar situations become somewhat predictable for the management.

Equality: The management remains unbiased towards the employees and ensures a fair-judgement at the time of any issue or problem in the organization.

Structure: A systematic organizational structure can be developed through bureaucracy where the rules, regulations, methods and procedures are pre-defined.

Systematic Record Keeping: This approach focuses on systematically recording all the business transactions and operations in documents to be used by the other employees in future.

Rationality: The recording of operations brings rationality, i.e., framing the laws, rules, regulations and procedures for future, based on the experience.

When we talk of bureaucratic management, there are numerous drawbacks of purely adopting this theory to run any organization.

Let us now elaborate over each of such shortcomings below: 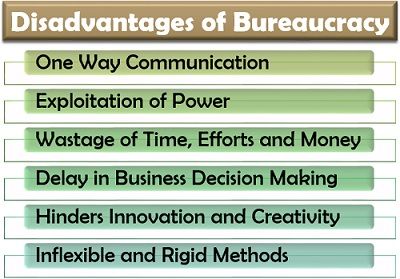 One Way Communication: The bureaucracy theory emphasizes on the passing of information, i.e., tasks, orders, rules and regulations, from the top-level management to the bottom level; however, feedback concerning the operational issues and other suggestions are not taken from the employees.

The exploitation of Power: In a bureaucracy, managers have a higher authority which can be misused by them to meet their interest or to dominate their subordinates.

Wastage of Time, Efforts and Money: It involves the recording of all the business transactions and operations to create documents which require a lot of time, money and efforts of the personnel.

Hinders Innovation and Creativity: The supervisor controls every activity of the employees, which ultimately restrict the subordinates to apply creativity and innovation to their work.

Inflexible and Rigid Methods: The bureaucracy theory does not entertain any change or modification in the management system, which makes it quite rigid.

Bureaucracy is rooted in controlling something with the use of power or authority; therefore, it is usually taken as a negative concept by many of us.

Every business operation is systematically penned down, and the employees follow the stated rules and regulations.

However, in the present scenario, it is tough to have a pure bureaucratic system in the organization. Still, a zest of it can be seen in the management of civil department, political and government organizations.