Definition: Dispute Resolution refers to a process through which two parties can come together and build a consensus to end the conflict. Another term for the same is Conflict Resolution. But it is a broader term that covers severe matters.

Dispute Resolution covers all the methods of managing disputes. Also, this process requires plenty of time and energy. 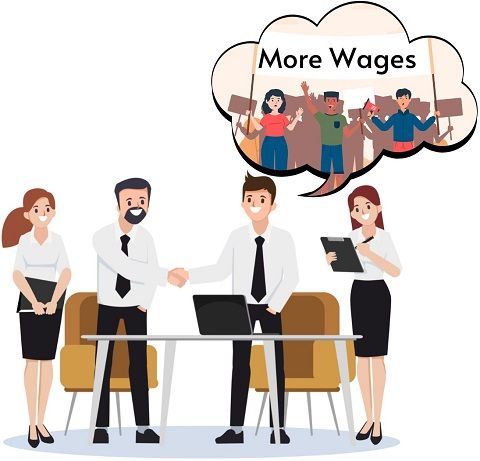 Another important aspect one should keep in mind is the cost involved. It varies as per the nature of disputes and methods of their resolution.

The benefit from resolving the dispute must exceed the cost incurred in the process.

Note: Not all attempts initiated towards dispute resolution are successful.

What is a Dispute?

A dispute is a dissimilarity in opinions between two or more people or groups. This dissimilarity can be in people’s behaviour, thoughts, interests, and goals.

Disputes may arise due to the following reasons:

Disputes, irrespective of the root cause, have adverse impacts on the stakeholders. Therefore, the early resolution of disputes is a must.

Businesses can resolve disputes legally, but every disagreement doesn’t need legal assistance. Thus they can opt for Alternative Dispute Resolution Methods(ADR) for settlement. 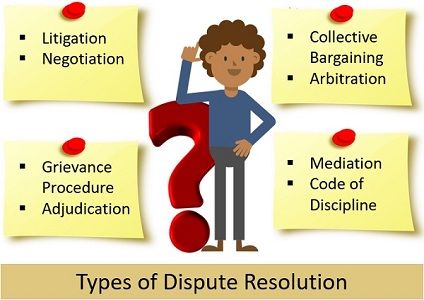 Given below are various types of dispute resolution methods:

It is the most common and participative form of resolving disputes. The representatives of both parties come forward and try to come down at the agreement state.

Collective Bargaining results in the formation of a collective agreement. The agreement specifies a revised set of rules about:

Arbitration is a method of ADR for settling disputes in the industry.

Disputed parties willingly appoint an Arbitrator for the settlement. The decision of the arbitrator is legally binding for both parties.

It involves fewer formalities and procedures in comparison to Litigation.

In this, an unbiased third party assists the disputed parties in resolving conflicts.

The mediator listens to the issues of both parties and recommends suitable solutions. He acts as a catalyst between both parties.

It is less formal than arbitration and involves lower costs. The information remains confidential between all three parties.

In this, the company defines the duties and obligations of the employer and employee.

The goal behind it is to-

Another method of resolving disputes is by way of the grievance procedure. A pre-defined procedure is specified in the labour contracts to be followed in case of any grievance.

Disputes can be resolved with ease by following this procedure strictly.

It is a lawful arrangement of dispute settlement at labour courts or tribunals. When the parties fail to reach a consensus by Conciliation, they go for Adjudication.

The verdict passed by the adjudicator is legally binding. But, like Litigation, there is a delay in the final settlement due to the number of proceedings.

This dispute resolution method involves settlement with the help of law. Generally, companies adopt this method when a large amount is involved in a dispute.

In this, the disputed parties come together and try to reach a conclusion mutually. They conduct a detailed discussion aimed at finding a positive outcome.

It refers to the clause containing all the details in case of disputes and ways of its resolution.

This clause is added in the agreements/contracts to clarify the course of action. The parties must follow the instructions in the clause in case of conflict during the term.

Steps Involved in the Dispute Resolution

In the annual meeting, the management decided to install new machines for production.

The announcement for the same led to disputes between the top brass and unions. Consequently, workers went on strike to oppose the decision.

Following are the issues that resulted in the strike:

So, they appointed an Arbitrator to resolve this dispute. After listening to both parties and considering the evidence, he suggested:

In this example, Beetal Industries adopted the Arbitration method for dispute resolution.

At the time of any dispute, we must try to identify the root cause of the disagreement. After that, we should adopt a necessarily suitable method to resolve the dispute.

Along with resolution, one must also consider the cost incurred in the process. It must not exceed the benefit derived post dispute resolution.