Definition: Industrial relations is that part of human resource management which studies the formal relationship of the workers with the administration and the employers and ensuring a proper mechanism to manage the industrial disputes and conflicts.

In the present scenario, the relationship between the employer and the employees have changed to a great extent what it used to be in the 1900s. The industries today are becoming more of technology-oriented, which has generated the need for skilled and educated personnel in the organizations.

Different scholars and experts have given various views in the context of industrial relations. To understand each of these approaches in details, read below: 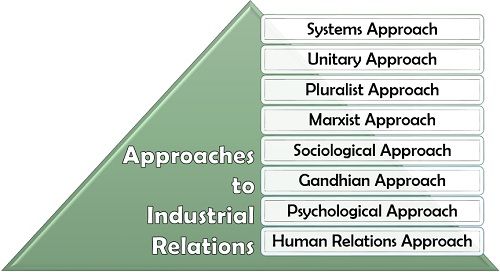 John Dunlop gave the systems theory of industrial relations in the year 1958. He believed that every human being belongs to a continuous but independent social system culture which is responsible for framing his or her actions, behaviour and role.

The industrial relations system was based on three sets of different variables:

Based on these variables, the following formula was derived by Dunlop:

This formula represents that the industrial relations system can be seen as a joint function of all the elements mentioned above.

As the name suggests, the unitary approach can be seen as a method of bringing together the teamwork, common objective, individual strategy and mutual efforts of the individuals.

This theory believes that the conflicts are non-permanent malformations, which are a result of improper management in the organization.

Moreover, if everyone works towards the achievement of the common goals by maintaining peace and cooperation in the workplace, it will tend to benefit everyone associated with the organization. It also considered the organizational conflicts resulting in strikes to be useless and destructive.

The other aims of the unitary approach are as follows:

The pluralist theory also called the ‘Oxford Approach’, was proposed by Flanders in the year 1970. This approach explained that the management and the trade unions are the different and robust sub-groups which unanimously form an organization.

Collective bargaining was considered to be a useful technique for resolving organizational conflicts. Due to this, the management’s role has transformed from imposition and control; to influencing and coordinating with the workers.

Following are some of the highlights of this approach:

Lenin came up with the concept of a Marxist approach in the year 1978, where he emphasized the social perspective of the organization.

This theory perceived that the industrial relations depend upon the relationship between the workers (i.e., employees or labour) and the owners (i.e., employer or capital). There exists a class conflict between both the groups to exercise a higher control or influence over each other.

The assumptions of this approach are as follows:

The industries comprise of different human beings who need to communicate with the individuals of other organizations.

Due to the difference in their attitude, skills, perception, personality, interests, likes and dislikes, needs, they are usually involved in one or the other conflict. Even the social mobility and other aspects including transfer, default, group dynamics, stress, norms, regulations and status of the workers influence their output and the industrial relations.

This theory also emphasizes on the impact of various changes in the work environment (i.e., economic, technical and political) on the interactions and relationship shared by the employer, employees, institutions and the government bodies.

The Gandhian approach to industrial relations was proposed by the father of our nation, Mahatma Gandhi or Mohandas Karamchand Gandhi, who was also a well-known labour leader.

Following are the various features of the trusteeship or Gandhian theory:

This theory gained massive popularity and is applied to address disputes and misunderstandings in the organizational setup even today.

The psychologists perceived the problem of the industrial relations as a result of the varying perception and mindset of the key participants, i.e., the employees and the management.

The ‘thematic application test’ was conducted by Mason Harie to understand the behaviour, mindset and perception of the two significant workgroups, i.e., executive and the union leaders, in a particular situation.

In this test, both the groups were asked to rate and interpret the photograph of an ordinary middle-aged person, and the results were drastically contrasting. The union leaders perceived the person to be a ‘manager‘ whereas, the executives thought that the person was a ‘union leader‘.

The major interpretations of this test were as follows:

These contrasting impressions are a result of certain economic as well as non-economic factors, like values, power, position, personal objectives, recognition, beliefs, education, social security and income of the individuals.

Also, each of these parties forms a negative image or perception of each other. Due to which they always find fault in the actions and behaviour of one another.

As a result of the factors mentioned above,  there remains a tensed interpersonal relation leading to conflicts which ultimately hinders the image and interest of the individuals involved.

The person behind the concept of the human relations approach is Keith Davis. The organization and the society comprise of human beings who vary in various aspects as their behaviour, emotions, attitude, mindset and personality. But, they have come together to achieve common organizational goals and objectives.

The concept of human relations approach underlines the need for making the individuals familiar with the work situations of the organization and uniting the efforts of the workers. The purpose is to meet the social, psychological and economic objectives, by enhancing the overall productivity.

Some of the primary objectives of the human relations approach are as follows:

This theory focused on enhancing the level of efficiency, worker’s morale and job satisfaction by applying specific techniques or tools and policies.

The human relations approach highlighted a technique for enforcing proper control over the work environment by forming small workgroups and at the same time eliminating the hurdles of sound labour-management relations.