Definition: An industrial dispute can be viewed as friction or disagreement between two or more parties involved, due to the difference in their perceptions, opinions, mindsets, attitudes and values. In an organization, the parties engage in such disputes can be:

On a massive level, conflicts can even arise between the government and the public.

Industrial disputes are sometimes observed as a result of poor industrial relations in the organization.

How can we categorize the industrial disputes depending upon its purpose?

Based on the objective behind an industrial dispute, we can distinguish it into the following four broad categories: 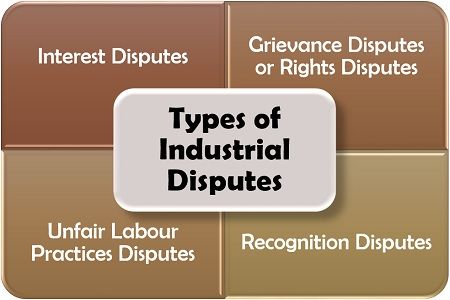 The interest here refers to gains. Therefore, the conflicts concerning the economic or non-economic interests of the employees, such as increasing the remuneration, working conditions, job security and other benefits are called interest disputes.

The trade unions often enter into a dispute with the management during negotiation or collective bargaining for the benefit of its member employees.

The conflicts concerning the employee’s rights and legal issues with the management are termed as grievance disputes. It includes promotions, work duration, leaves allowed, over time, fringe benefits, safety and security.

The disputes over the unethical treatment of the management towards the labour such as discriminating them for holding membership of trade union, restricting communication, employing new workers during strikes and denial to bargain are called unfair labour practices disputes.

What are the reasons behind industrial disputes?

Even the smallest of the reasons can contribute to the raising of conflicts in an organizational setup if it impacts the respondent to a great extent.

Let us have an in-depth analysis of each of these causes by reaching out to the roots of industrial disputes: 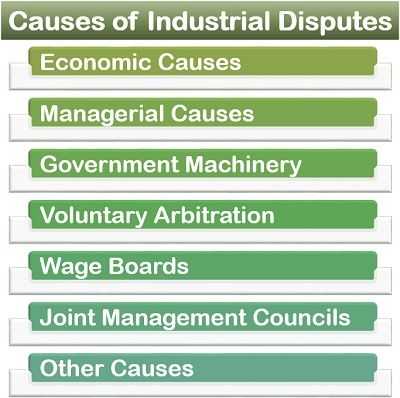 The ultimate aim of the labour is to earn their livings and meet their economic ends. Whereas, for the business, it is generating profits. Therefore, on the non-fulfilment of these needs, industrial disputes can take place between the management and the labour.

The word arbitration refers to the settlement of any dispute mutually with the help of an arbitrator.

Thus, in voluntary arbitration, there is a third party involved in the settlement process. Its decision can be biased or unacceptable by either of the parties, which can result in further conflicts.

The Indian government has set up wage boards for determining the suitable wages of the workmen or labourers.

When the workmen are dissatisfied with their remuneration, there arises a condition of an industrial dispute.

The government created Joint Management Councils, which consist of equal representatives of both the parties to deal with the worker’s problems, but the idea failed due to lack of efficiency and progress.

The various other causes of industrial disputes are stated below:

The consequences of an industrial dispute are hazardous to the employer, employees, organization, society and the economy.

However, it is taken as a useful tool by the workers, to raise their voice and put up their demands in front of the management or employers. It empowers the labours and protects their rights of speech in the organization.

Following are some of the essential ways in which the industrial disputes takes shape in the organization and are carried out by the employees as well as the employer sometimes: 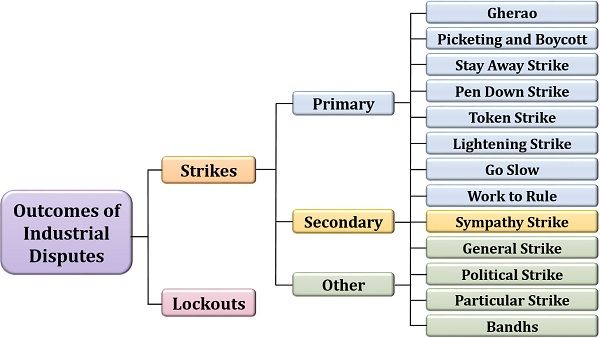 It is a way through which a group of workmen exercise pressure on the management by stopping the work and protesting against the employers to get their demands fulfilled.

Following are the different types of strikes:

Primary Strikes: The strikes which are directly projected against the employers are called as primary strikes. Some of the most common primary strikes are as follows:

Gherao: Gherao refers to physically encircling the managers by the workmen to create a restricted area where no one can move in or out. The targeted managers are humiliated through; abuses also they are restricted move in or out.

Secondary Strikes: The other name for the secondary strike is the sympathy strike. In this, the force is applied against the third person having sound trade relations with the organization to indirectly incur a loss to the employer and the business. The third person does not have any other role to play in such a strike.

Other Strikes: There are undoubtedly other forms of strike too, which takes place on a vast level involving and affecting a large number of people. These are as follows:

This form of an industrial dispute is raised by the employers to impose specific terms and conditions on the workers. It is very different from layoff, retrenchment, termination or prohibition of employees.

In lockouts, the employer temporarily closes down the workplace or stops the work or takes action like suspending the workers to force them to follow the new terms and conditions.