Definition: Collective Bargaining is a process used to resolve the conflicts amidst management and the employees relating to essential terms and conditions of the employment. It concludes with an agreement amongst the management’s representatives and the employees’ bargaining agents stating the issues regarding compensation and service conditions.

Both representatives may initiate the process with conflicting views but eventually try to attain a settlement, making some atonement. As soon as a settlement is attained, the terms of an agreement are assigned into an operation.

In short, collective bargaining is a preventive measure which reduces the conflicts and chances of enhancing conflicts amongst management and the employees.

The process of it comprises of six significant steps which can be understood more clearly with the diagrammatic representation as shown below: 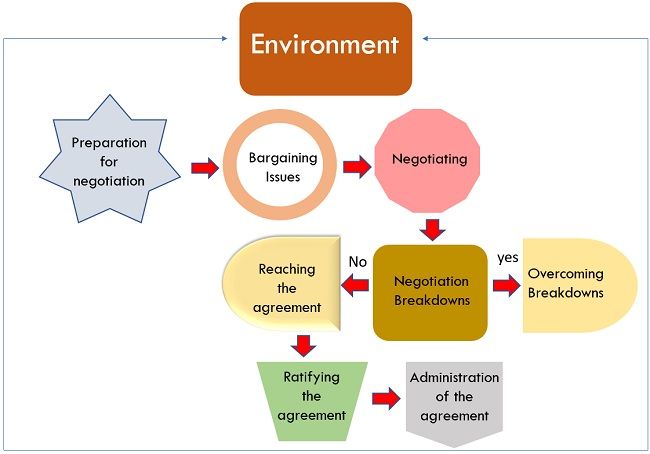 It is a type of a legal contract setting out the terms of employment in a company as an excellent adventuring negotiation between labour unions and representatives of the company. Such agreements can include multiple associations and their negotiation, and they are typically set to expire after one year on which point a new agreement needs to be negotiated. Collective Bargaining Agreement is amongst numerous tools available to labour unions to help, define, and protect the rights of individual workers in the negotiations. Members of the association authorized to negotiate on behalf of the employees meet with authorized representatives of the company.

Both sides representative’s layout of their needs in a series of conducted talks to meet the collective negotiation point. It is generally necessary to make concessions in each an agreement and break meaning to be taken to allow negotiables to bring proposals back to the side they represent to discuss the proposals and to make decisions about whether to accept them. If union representatives are not pleased with a way the talks going, they may threaten to call for a strike. To avoid such conditions collective bargaining agreement is made. The government may also involve if this point of a company is working in an essential industry; this would be disrupted by strike like the airline industry.

Government representatives may offer to act as mediators to facilitate talk so the strike can be aborted. Once the negotiation is concluded, the agreement gets drawn up articulating the agreed-upon points. Such agreements involve terms like salaries and wages, dispute resolution methods, working hours, and safety considerations. The resulting labour contract is considered legally enforceable when it is signed by all parties involved. If one party runs from collective bargaining, there can be a legal penalty. Union members are made aware of their rights and responsibilities under the union’s agreement and documents.

Joining the union gives people access to support provided by the union from assistance with disputes in the workplace to compensation in the event of a strike. People working in a union environment are often strongly encouraged to join the union to access the union’s benefits.

Following are the types of collective bargaining: 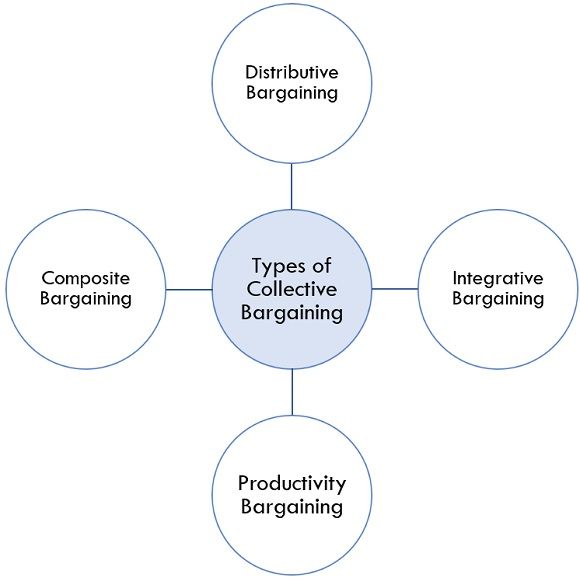 1. Distributive Bargaining: In this sort of bargaining, the labour and the management both tries to enlarge their profits; however, only one party achieves success. Economic affairs like salaries, wages, and bonuses are discussed with one another where labour desires to have raised wages, and management desires to draw more work in low wages.

2. Integrative Bargaining: Both labour and management hold a meeting and seek to solve their shared interest issues and attain a cordial result. At the time of economic crisis like recession, which is outside the limit of both parties, they can enter into a bilateral deal with regard to the working terms.

3. Productivity Bargaining: This kind of bargaining is done by the administration, where the labours are addicted to the motivation or the reward for the raised productivity. The labour gets inspired and works with great force to arrive ahead of the usual productivity level to attain increased profits. By virtue of this bargaining, the management and labour both retain the assistance by way of expanded production and raised pay respectively.

4. Composite Bargaining: In this class of bargaining raised wages insistence is made, and labours also convey their concern over the working environment, training, amalgamations with other companies, pricing policies, etc., with the purpose to protect their interest and safeguard the infusion of their powers.

Following are the importance of collective bargaining at different levels:

Collective Bargaining is precisely a modern relation system or structure and is a facet of negotiation relevant to contracting relationship. Today, it has simulated an obscure nature, operated in an extremely formal environment, combining the services of an enormous number of experts and consultants.