Definition: Channel conflict can be explained as any dispute, difference or discord arising between two or more channel partners, where one partner’s activities or operations affect the business, sales, profitability, market share or similar goal accomplishment of the other channel partner.

As we know that every manufacturing company needs to plan its distribution and marketing channel appropriately, to ensure market captivity and customer satisfaction along with growth and profitability.

In the process of the constant supply of products in the market, several channel partners and intermediaries join the supply chain of the brand. Any clash and disturbance among these trading partners can be considered as a channel conflict.

The channel conflict can be classified majorly into the following four categories depending upon its flow and the parties involved: 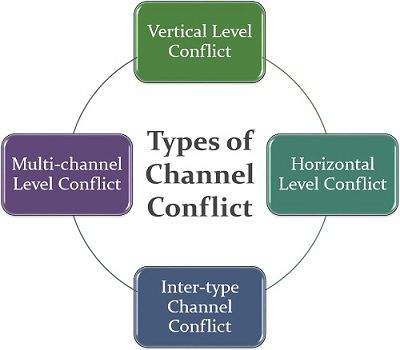 In the vertical level conflict, the channel partner belonging to a higher level enters into a dispute with the channel member of a lower level or vice-versa.

The conflict among the channel partners belonging to the same level, i.e., issues between two or more stockists or retailers of different territories, on the grounds of pricing or manufacturer’s biases, is termed as horizontal level conflict.

These type of conflicts commonly arise in scrambled merchandising, where the large retailers go out of their way to enter a product line different from their usual product range, to challenge the small and concentrated retailers.

When the manufacturer uses multiple channels for selling the products, it may face multi-channel level conflict where the channel partners involved in a particular distribution channel encounters an issue with the other channel.

The level to which the conflict is considered critical or needs the attention of the channel leader, i.e., manufacturer, is known as its magnitude.

The magnitude of conflict can be determined through the proper analysis of the change in market share and the company’s sales volume in a particular area or region.

What are the reasons responsible for a channel conflict?

Following are some of the key reasons for which the organizations need to face channel conflict: 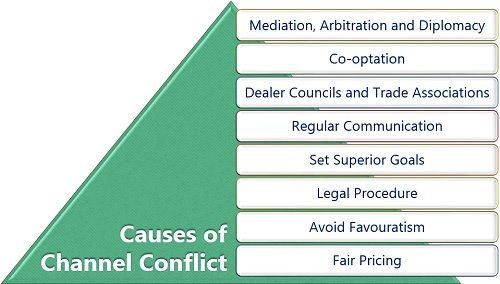 Role Ambiguity: The uncertain act of an intermediary in a multi-channel arrangement may lead to disturbance in the channel of distribution and cause conflict among the intermediaries.

Incompatible Goals: When the manufacturer and the intermediaries do not share the same objectives, both work in different directions to meet their ends, this results in channel conflict.

Marketing or Strategic Mis-Alignment: Sometimes, two-channel partners promote the manufacturer’s product in a different manner, which created two different images of the same product in the consumers’ mindset, which creates conflicting brand perception.

Difference in Market Perception: The manufacturer’s understanding of the potential market and penetration into a specific region or territory, may vary from the perception of the intermediaries, which can create conflict and reduce the intermediary’s interest in capturing that particular market.

Change Resistant: When the channel leader plans to modify the distribution channel, the intermediaries may or may not accept this change. Thus, it may result in a condition of discord or non-cooperation.

Improper Geographic or Demographic Distribution: If the sales territory has a narrow consumer base, and the channel leader allows many selling partners, they tend to lose interest soon because of low profit and limited sales.

Now that we know about the causes of such conflicts, we must also understand how dangerous these may prove to be for an organization.

Given below are some of these outcomes: 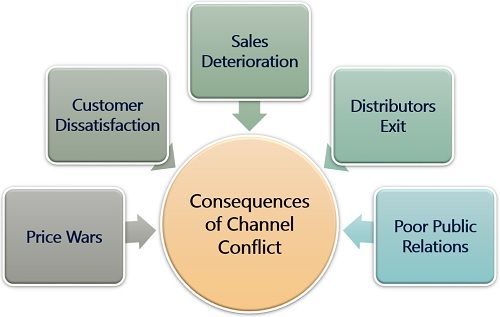 It is a universal fact that the conflicts cannot be eliminated, though these can be handled smartly to reduce its negative impact on business.

Following are some of the ways to manage the channel conflicts: 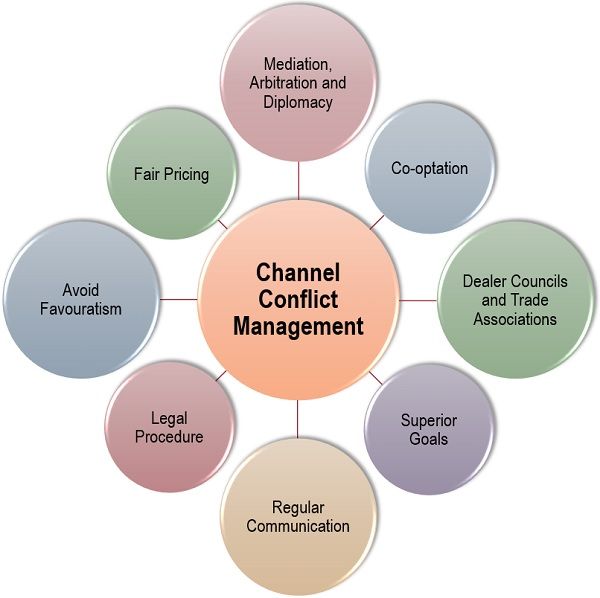 To resolve a dispute, the manufacturer can adopt the strategy of intervention where a third person intervenes to create harmony. The other option is arbitration, where an arbitrator listens to the argument of the parties involved in a conflict and declares a decision. Or, the parties can resort to diplomacy where the representatives of both the parties conversate and find a solution.

The manufacturer should hire an expert who has already gained experience in managing the channel conflicts in other organizations, as a member of the grievance redressal committee or board of directors, for addressing such conflicts.

To handle the horizontal or vertical conflicts, the manufacturer forms a dealer council where the dealers can unanimously put up their problems and grievances in front of the channel leader. To bring in unity among the channel partners or intermediaries, they can be added as members in trade association which safeguards their interest.

Establishing a supreme goal of the organization and aligning it with the individual goals or objectives of the channel partners, may reduce the channel conflicts.

When the conflict is critical and uncontrollable by the channel leader, the aggrieved party can seek legal action, by filing a lawsuit against the accused party.

Most of the channel conflicts are a result of the price war, and therefore, these can be resolved by ensuring that products are equally priced in all the territories and a fair margin is provided to the channel partners.

The world-renowned brand ‘Samsung Electronics‘, faced a multi-channel level conflict in its Indian market in the year 2014. The company was selling its products (especially mobiles) through multiple channels, i.e., via offline mode and online mode.

The offline channel partners raised the issue that the e-retailers are providing high discounts to attract more and more customers, which had ultimately affected the offline sale of the product.

Due to this, many retailers and distributors in the offline market, distance themselves from the brand and its products.

To address this issue and retain its offline distributors and retailers, Samsung provided the right to sell forty-eight models of its brand exclusively through the offline distribution channel, thus, re-energizing the brick and mortar channel partners.