There are numerous types of groups which differ from each other because of their size, purpose, membership criteria, formation, functioning, arrangement, etc. In our daily lives, we come across this word ‘group’ indefinite times.

However, selecting a particular group may or may not be in the hands of its members; each one of us belongs to one or the other group in some manner.

A person becomes a part of a group, knowingly or unknowingly; for a purpose or as a choice; and for short-term or long-term. Groups can be differentiated into the following nine major categories: 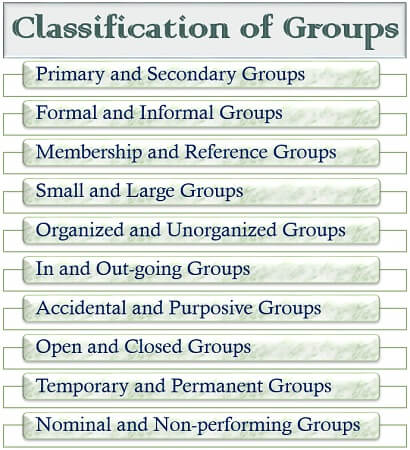 In terms of face to face or indirect interaction between the parties, groups can be bifurcated as follows:

Primary Group: The group where an individual directly interacts with other members is termed as the primary group. It is responsible for the initial learning and social behaviour of an individual.
Secondary Group: When a person in a group is indirectly associated with or influenced by other members, he/she is said to be in a secondary group.

We can categorize the groups into two major classes according to the purpose it serves. Whether it is for fulfilling an organizational objective or for meeting the self-interest of the members.

Following are the related categories and sub-categories of groups: 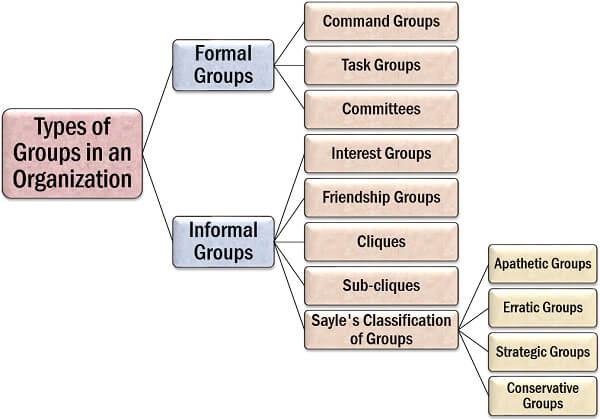 When people collaborate to attain the organizational goals or objectives, they are said to form a formal group.

Following are the three major types of formal groups existing in an organization:

Command Group: As a result of hierarchical arrangement in an organization, a command group is made of the superiors and their subordinates representing the flow of command or orders from top to bottom level.

Task Group: A group which includes individuals with different skills and knowledge, to successfully carry out the assigned project, is called as a task group.

Committees: For the special assignments or projects, a group is formed by appointing the specialists or people with superior knowledge; which is termed as a committee. After the project responsibilities are executed successfully, the members can disassociate from the committee.

When the individuals associate with one another to serve their common interest or for self-satisfaction, they are known to form an informal group. Some of the most common informal groups are:

Interest Groups: The individuals who join hands for a common purpose (related to self-interest) create an interest group.

Friendship Groups: The group which is formed as a result of personal choice by the individuals who are already familiar and feel comfortable with one another, is called a friendship group.

Cliques: In a workplace, few colleagues join hands to form a small group (usually with two to six members) to share ideas and thoughts on their mutual interest.

Sub-cliques: When a clique comprises of few organizational employees along with some non-employees (who are associated with the other members in either way), it termed as a sub-clique.

Sayles’ Classification of Groups: L.R. Sayles categorized the groups into the following types depending upon the degree of pressure prevalent in each:

We can also distinguish between the different groups by the need for official registration of the members, into the following two categories:

Membership Group: A group in which the members must get themselves registered and acquire a membership card or certificate for becoming a part of it, is termed as a membership group.

Reference Group: It may not be a real association of individuals, an illusionary group to which an individual relates himself/herself due to the same profession or other similar attributes is called a reference group.

Based on the number of members involved in a group, we can classify it as follows:

Small Group: Small groups consist of as little as three to ten members. Such groups are usually well managed and organized.

Large Group: The groups made up of more than ten members are considered to be large groups. These massive groups are challenging to handle and unsystematic at times.

Given below is the categorization of the groups in terms of its structure and bonding among the group members:

Organized Group: When the individuals belonging to a particular discipline work together systematically as a team by supporting each other, they are said to be in an organized group.

Unorganized Group: The disorganized group is not formed purposefully. Instead, the individuals just happened to fall into a single group where they neither have any attachment to one another nor have any belongingness.

In and Out-going Groups

We can also distinguish among groups according to the belongingness and involvement of the individuals, as below:

In-Group: A group where an individual is socially active and adopts strong values from the other members is termed as an in-group.

Out-going Group: The other groups, except the prevalent in-group, where no inter-group exchange of values is facilitated is termed as out-going groups.

The purpose of the group formation provides a basis for its classification into the following two categories:

Accidental Group: When a group is formed coincidently or unknowingly, that too without any purpose, it is known as an accidental group.

Purposive Group: The group which is made for a definite reason or aim of task fulfilment is termed as a purposive group.

Based on the scope for entry and exit of the members in a group, it can be distinguished as follows:

Open Group: The group where the new individuals can freely enter and old members can exit anytime, is known as an open group.

Closed Group: The restricted group where no further entries are entertained, is called as a closed group.

A group can be formed for a short period or a long duration. Let us now discuss the two categories of groups based on these criteria:

Temporary Group: When the individuals come together for a particular project or task accomplishment, they are known to be in a temporary group. Such a group disintegrates after the successful performance of the task.

Permanent Group: Such groups represent a long-term association of the group members. Here, people belonging to a particular organization are known to be in a single group.

Based on the need for action, groups can also be bifurcated into the following types:

Nominal Group: The group in which the members are involved in problem-solving, take up challenges and carry out operations, is termed as a nominal group.

Non-performing Group: Whenever the individuals are put together in a single group, just on a sheet of paper; however, they need not carry out any task, they tend to be in a non-performing group.

Understanding the various types of groups becomes a necessity while planning and analyzing group dynamics. An influential group emerges as an efficient and well-coordinated team.