Definition: Business Communication refers to the exchange of thoughts, ideas, views and information among the personnel working in or associated with the organisation. Communication, i.e. interacting in some or the other way is essential for humans beings to survive in a social environment.

Similarly, effective communication is the foundation of a successful organisation and to carry out business activities smoothly.

Communication is a need in today’s business world. The people either work for or are associated with an organisation, including employees, stakeholders, banks, customers, suppliers, advertisers, etc. Thus, they need to interact and communicate with each other to achieve business objectives as well as fulfil their requirements.

Let us now understand the various ways in which interactions take place in an organisation. Business communication can be classified by its structure, direction of flow of information, modes of communication and response.

The first one is the structure of communication; the channel used for interaction plays a vital role.

It can be further bifurcated into the following two categories:

It is a regular and organised channel of work-related communication within a company, where the employees have to coordinate through a proper medium among themselves.

Types of Formal Communication Network: A communication network is a pattern designed to understand how information travels from one person to another.
Let us now go through the different networks provided under formal communication:

It is an unofficial form of communication arising out of friendship or casual relations, where the discussions may or may not be related to the work or the organisation.

Types of Informal Communication Network: Though there is no particular system which is followed for informal communication, still following are the four informal networks identified:

Based on the Medium of Communication

The way a message is framed and the channel used for sending information to the receiver determines the following forms of communication: 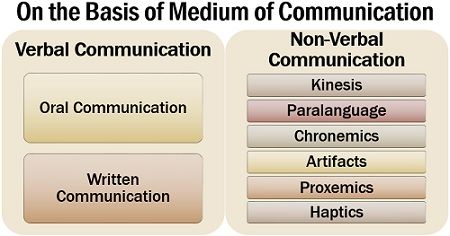 Transmission of information which is enclosed in words whether written or said is known as verbal communication.

A message framed in words when spoken to the receiver is termed as oral communication. It includes face to face interaction, calls, voice calls, video calls, a recorded message, etc.

Whereas, when the sender drafts a message in words for the receiver to read, it is called written communication. For example; a letter, an email, brochures, circulars, notice, message chat, etc.

There are different types of non-verbal communication, including kinesis, paralanguage, chronemics, artefacts, proxemics and haptics.

Artefacts include the appearance, personality, dressing sense and presentability of a person. Whereas, chronemics is the timing, punctuality, pause etc. while speaking.

Proxemics is the distance which a person maintains while communicating with others, speaks a lot about the relation between the two. Lastly, haptics or the touch also inform about the feelings and expressiveness of a person.

Based on Flow of Direction

The direction in which information or a message flows within a formal set up in an organisation defines the type of communication it is.

Following are the four primary forms of communication- according to  their direction: 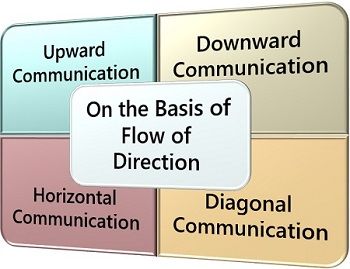 In upward communication, the sub-ordinates share their problems, suggestions and ideas with their seniors.

When the seniors pass on orders, instructions, policies, rules, norms, etc. to their subordinates, it is known as downward communication.

When communication takes place among two people holding a similar position in the organisation, it is known as horizontal communication. For example; A sales manager provides the sales revenue sheet to the finance manager.

When the senior of a particular department shares some information with the subordinate of the other department and vice-versa. For example; a human resource manager warns a sales executive for excessive leaves.

Communication in an organisation can be differentiated as per the need for response or feedback.

Following are the two types of business communication, based on the response:

In one-way communication, the sender passes on the information to the receiver without seeking any feedback or response. For example; an advertisement for a particular product on television.

When the sender shares some information with the receiver, and in return, the receiver responds to such information, it is known as two-way communication. For example; the manager discusses the problem of low productivity with the team, and they give reasons for the same.

We, humans, are considered to be social animals, and therefore, interaction with each other is a necessity for us. So goes for business, no business activity can survive in the absence of communication.