Definition: Social loafing refers to a psychological phenomenon which has brought forward a different side of human resource. It states that the employees working in a group, underperform a given task in comparison to their potential, ultimately hindering the group performance. This is because they develop a casual attitude towards the assigned responsibilities by putting in their least contribution and thus, relying upon the efforts of other team members.

The concept of social loafing or Ringlemann effect has denied a traditional belief that ‘people tend to perform better when they work as a team’. Max Ringlemann, a French engineer, carried out the rope pulling experiment.

He discovered that, when the participants were asked to pull the rope in groups of two, three and eight, they put in fewer efforts; as compared to when they were individually pulling the rope. Thus, Ringlemann came up with this concept of social loafing in the year 1913.

Let us now see the two significant ways in which social loafing takes place in an organization:

Sometimes, one or more team members possess a casual attitude towards the group goals, feeling that their contribution to the task is not that compulsory.

Since the other members will now solely accomplish the given project, it is termed as the free-rider effect. Such social loafers are considered as free-riders.

Due to the free-rider effect, the other members of the group or team feel overloaded with work. This is because they now have to do the task of such free-riders too, without getting any additional recognition.

Thus, the other team members get demotivated and feel sucked at their job. These active members also disengage themselves from work, sensing their exploitation by social loafers. This is known as the sucker effect of social loafing.

What are the reasons which can be held responsible for social loafing in an organization? Why do the organization face such a problem?

This issue is deeply rooted in the organizational factors and group formations. Discussed below are some of the causes of this social psychology phenomenon: 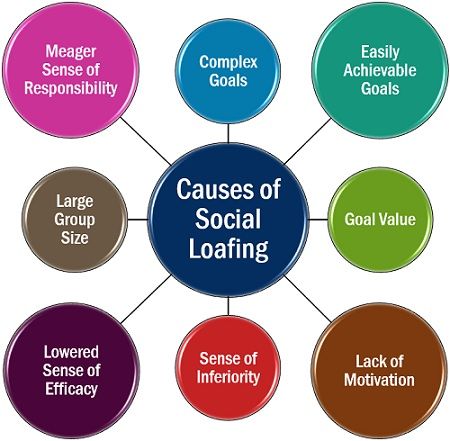 Complex Goals: The individuals usually give up when they feel that the goals set by the management are robust and impossible to achieve.

Easily Achievable Goals: If the goals set are simple enough and does not pose any challenge for the employees, they tend to feel demotivated. Thus, showing minimal interest in achieving them.

Goal Value: If the team members feel that the goals or objectives laid for them have no significance and won’t add any value to the organizational objectives; they will try to slack off from the given task.

Lack of Motivation: The demotivated workforce is another primary reason for social loafing where the employees are not charged up to fulfil the given responsibility.

Large Group Size: At times, the group or team consist of more number of individuals than required.

Sense of Inferiority: The team members who are less skilled or average performers are sometimes put in the group of super achievers.

This will develop an inferiority complex, resulting in average employees depending upon the efficient team members for task accomplishment.

Lowered Sense of Efficacy: When the individuals feel that their efforts are undervalued or ignored, they find it better to escape from their responsibilities through social loafing.

Meagre Sense of Responsibility: If the employees are not made individually accountable for the given task, they would be reluctant of their duties and responsibilities.

Moreover, they will prefer to rely upon those who hold accountability to accomplish the assigned responsibility.

Social loafing creates a negative impact on the performance of the group and thus slowing down the productivity of the whole organization.

Let us now understand the various adverse effects which it has on the organization: 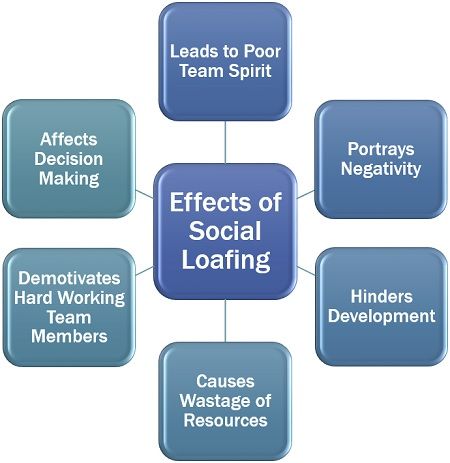 How to Prevent Social Loafing?

Social loafing not only hinders the team performance but also leads to downfall in the competitiveness and growth of the organization.

Therefore, it is essential to encounter and deal with such activities. 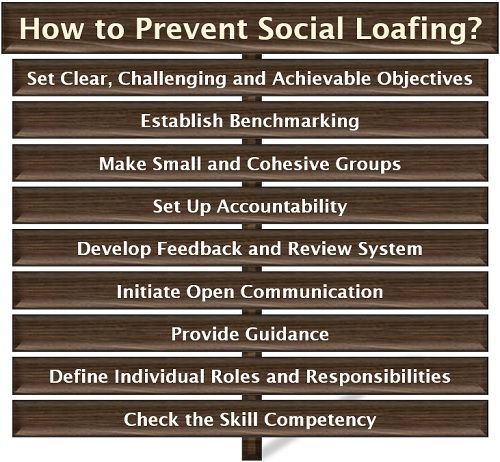 Following are some of the measures which can be adapted to disrupt social loafing in an organization:

Social loafing can be easily identified if the manager regularly takes round in the work area.

It would help him/her to figure out the behaviour, attitude, contribution and participation of each individual, during the group activities and team efforts.