Definition: Producer Equilibrium is the combination of price and output that yields maximum profit. Besides, it is the point where the producer maximizes profit or minimizes losses.

Briefly, it is an output level where profit is maximum and firms have no intent to change it. 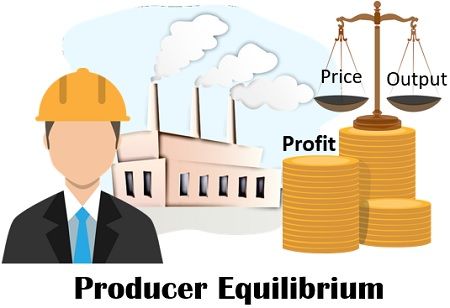 It is alternatively known as Firm Equilibrium, Profit Maximization or Loss Minimization.

In general, equilibrium is a state of no change. So, firms don’t change their pricing and production policy when in equilibrium. Therefore, it is the point of optimum profit.

The producer will be nonprofitable at any point above and below equilibrium.

Besides, the firms must stress on two aspects:

Who is a Producer?

A producer is an individual or firm who is engaged in the activity of production of goods and services.

A producer gets satisfaction when he earns a profit. However, he becomes profitable when revenue is more than cost.

We can determine the equilibrium point for firms using two methods given below:

In this method, firms ascertain the variance between TR and TC at various output levels. And, the output generated by calculating variance is in the form of Profit or Loss.

The maximum difference between TR and TC signifies optimum profit. Thus, producer equilibrium is when the TR and TC difference is maximum at a specific output level.

Note: The variance between TR & TC can be maximum at multiple output levels. In this case, equilibrium will be at the point where profit starts declining.

Let’s understand it in two situations:

Here, the firms operate in a perfectly competitive market where price remains constant. In addition, the firms are ‘Price Takers’ and ‘Quantity Adjusters’.

In perfect competition, the TR curve moves upwards towards the right and forms a straight line. 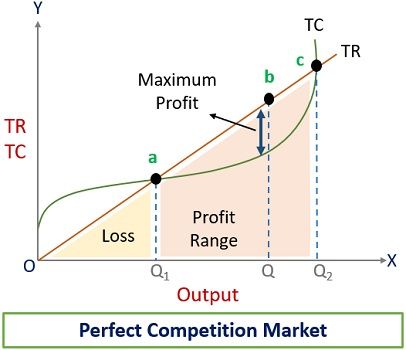 It is a situation of Monopoly and Monopolistic competition. Here, the firms can sell more only when they reduce products price. Thus, the price gets reduced due to an increment in output.

In non-perfect competition, the TR curve isn’t a straight line. This is because it is affected by MR. So, the TR curve rises up but at a decreasing rate. 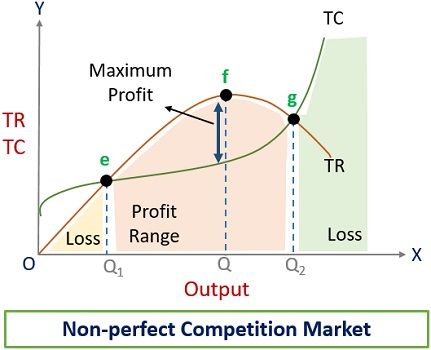 This method is unsuitable because:

We ascertain the firm’s equilibrium output level by comparing MR with MC in this method.

The production is said to be profitable when MR is more than MC. However, firms will earn an optimum profit when MR is equal to MC. If the firms carry out production beyond this level, they will suffer losses.

Firms must fulfil two conditions given below to reach equilibrium:

Let’s understand it in two situations:

In a market with perfect competition, AR is equal to MR. And, MR is a horizontal straight line due to constant price. 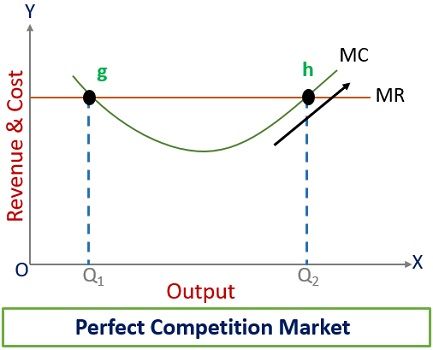 Firms would have lost the opportunity to earn more profit if would have paused production at ‘g’.

Here, the firms have to lower prices to boost sales. Consequently, the MR curve moves downwards towards the right. 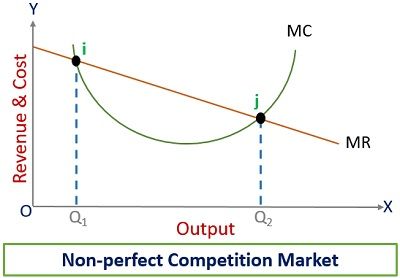 Producers Equilibrium and the cost curves

It represents the combinations of two inputs that possess the same cost.

In the short run, supply can’t be adjusted with demand. Consequently, firms may bear a loss, which is called a Minimum Loss. The reason behind it is that the firm has to bear fixed costs despite the production being more, less or zero.

Here, all the factors of production are variable. However, firms can adjust supply with demand. Besides, there is a possibility of entry and exit of other firms.

To sum up, firms carry out production intending to earn profit. For this purpose, they try to find a profitable combination of price and output.