Definition: Consumer equilibrium is when the customer attains maximum satisfaction from his present consumption pattern with given income and prevailing market prices.

Here, the customer is not likely to change his expenditure and units consumed. This is because, he derives the highest utility from the commodities purchased with the given income. 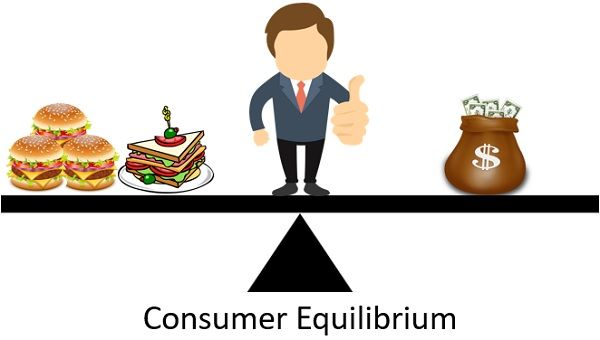 First, lets us understand what equilibrium is?

Equilibrium refers to a situation of balance. It is a point where one has no intentions to change the proportion between the two components.

In consumer equilibrium, the two components are:

A rational customer aims at maximizing his satisfaction. He or She may spend his income on one or more commodities. The point of consumer equilibrium differs in both cases.

Based on the measurability, we can explain the conditions of consumer equilibrium under two approaches:

This approach suggests that the utility derived from the products is cardinal, as given by Professor Alfred Marshall. In other words, utility is measurable in monetary terms and expressed numerically.

The quantity consumed affects the utility derived from that good.

The unit of measurement of utility is Utils, as given by Benham.

According to this approach, the utility is cardinal. But, it is a feeling, and one cannot express it in numbers.

Following are the two situations of Consumer Equilibrium based on cardinal utility analysis:

In this case, the consumer spends his total income on one commodity. The number of units consumed depends on two factors:-

Consumer Equilibrium for a single commodity follows the Law of Diminishing Marginal Utility(DMU). Thus, all the assumptions of the DMU will be applicable here.

The formula for calculating Consumers Equilibrium for a single commodity(X):- 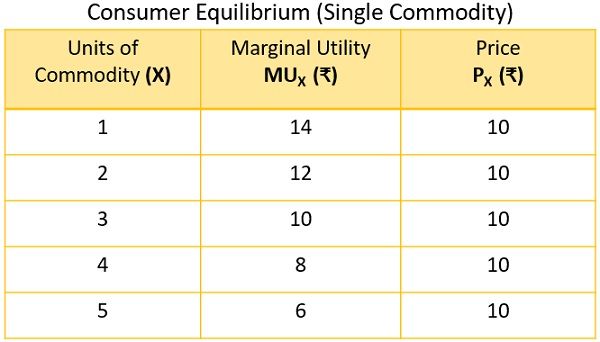 Suppose, the consumer is spending his income on purchasing product X. The price of X is Rupees 10/-. And the marginal utility in terms of money is shown in the table above. 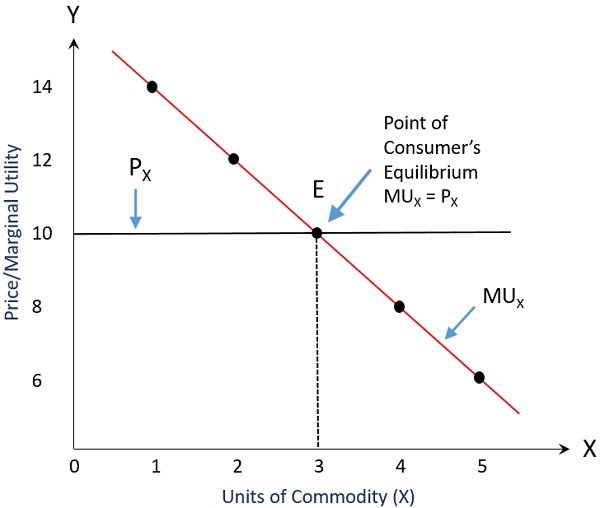 In the above graph:

He will get maximum satisfaction on purchasing three units of the commodity X for Rs.10/-.

In this case, the customer decides to divide his total income by purchasing two or more products. He will get maximum satisfaction at a point at which he will reach an optimum quantity of these products in combination.

In the case of one or more commodities, the law of Equi-marginal utility is applicable. So, all its assumptions are applicable here.

One must fulfil three conditions given below to reach consumers equilibrium:

Let us assume these two commodities as X and Y. The following equation is a primary condition for consumer’s equilibrium:

PY is the price paid for Y

The customer increases his consumption on X then Y. However, his satisfaction will decrease. As a result, MUX will decline, and MUY will rise. He will continue to consume X until he reaches the primary equilibrium condition.

In this, the consumer consumes more of commodity Y than X. His satisfaction will reduce because of the law of DMU. He will increase consumption on Y until he reaches the primary equilibrium condition.

We will understand consumer equilibrium with two products in the following example.

Let us assume the two goods as Burger (B) and Sandwich (S). 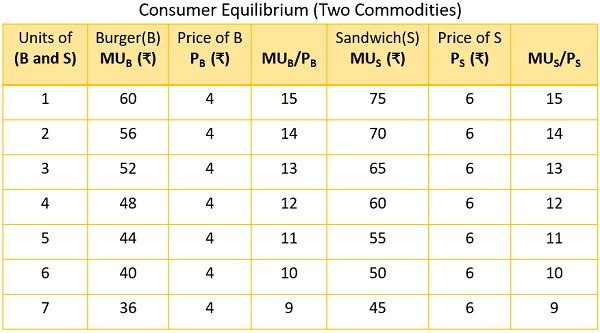 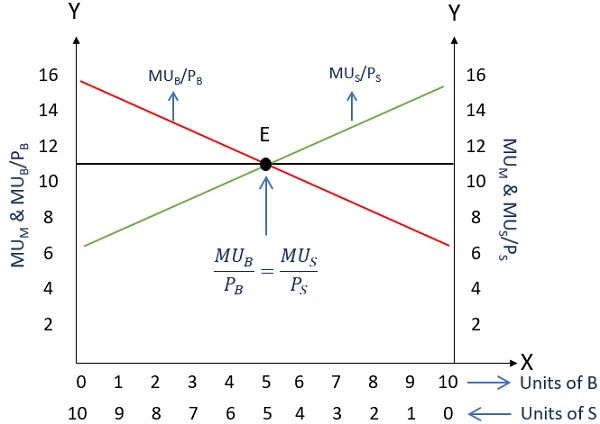 In the above graph,

The consumer will be highly satisfied on consuming 5 units of Burger and Sandwich. This combination is the optimum quantity he can buy with the income of Rs.50/-.

This approach suggests that the utility cannot be cardinal. Instead, one can compare or rank it. Economists Hicks and Allen gave this theory.

The customer can state his preference for one product over another in various combinations. He can compare these combinations of the products called Bundles. And rank these bundles based on the satisfaction derived from them.

Now let’s discuss the consumer equilibrium through the indifference curve based on the ordinal utility.

An indifference curve shows various alternatives of the two products in combination. These combinations avail the same utility throughout the curve.

The customer will get the highest satisfaction on attaining the most preferred combination of the two products. Because of the fixed income of the customer, the equilibrium point must fall on the budget line.

Consumers equilibrium will be a point where the budget line touches the highest indifference curve.

Let the two commodities be X and Y.

A budget line must be tangent to the indifference curve.

An indifference curve should be convex to the origin. The MRS of the commodity for X in terms of Y should be negative.

The consumer gives up more Y units to acquire one X unit than the market allows. It will increase consumption of good X and a fall in MRS. He will consume more of X until MRS becomes equal to the price ratio of X and Y.

The consumer gives up fewer Y units to acquire one X unit than the market requires. It will reduce consumption of good X and a rise in MRS. He will consume less of X until MRS becomes equal to the price ratio of X and Y. 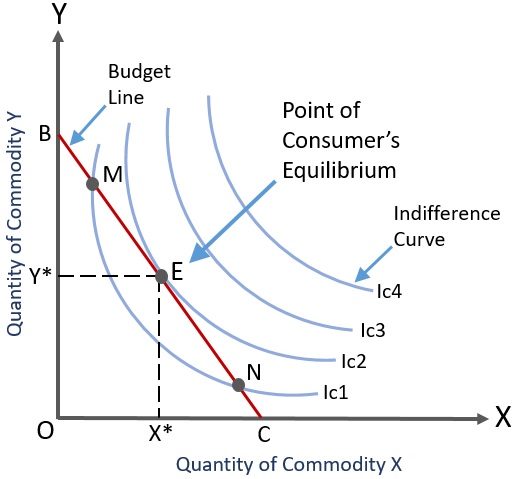 In the above graph:

As stated above, the customer gets maximum satisfaction at the highest indifference curve.

If he moves backwards in BC towards M or forwards towards N. It will give him less satisfaction as they lie on the lower indifference curve.

Thus, Y*and X* quantity of goods will be the optimum combination of goods. This bundle will provide maximum satisfaction to the consumer.

The consumer will be in a state of no change when he procures maximum satisfaction. He will only get less satisfaction below or above this state.