Definition: A Ponzi scheme is a fraudulent game plan where a schemer proposes a false investment proposal to the public, promising risk-free high returns on their investment value by pretending to pool the accumulated funds in profitable business ideas.

In reality, the money is not invested anywhere, whereas the schemer redistributes the collected amount by paying the promised returns to the initial investors from the funds acquired from the new investors.

This scam goes on until the schemer can attract more and more investors and distribute the amount collected from them to the initial investors.

The scheme cannot sustain for an extended period and collapses as soon as the schemer stops getting new investors or at the time of economic downturn.

Characteristics/Signs of a Ponzi Scheme

You must be wondering how to identify a Ponzi scheme? What are the traits that help in identifying a scam?

It is not very difficult to identify a Ponzi scheme if we keep in mind the following signs that indicate fraudulent activity while selecting an investment option: 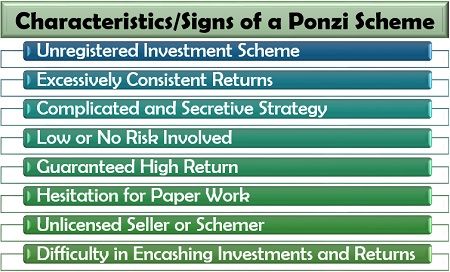 Unregistered Investment Scheme: A Ponzi scheme is an unregistered form of investment which not regulated by any governing body such as the Securities and Exchange Commission (SEC).

Excessively Consistent Returns: No high return scheme provides a consistent return without any risk involved. And if any investment promises or gives a high and stable profit, it is a Ponzi scheme.

Complicated and Secretive Strategy: Usually, a Ponzi scheme is unable to justify that from where the profits are being generated and have a confused or doubtful business strategy.

Low or No Risk Involved: Every investment involves risk, and if a scheme is claiming to be completely risk-free, then it is a Ponzi scheme.

Guaranteed High Return: Ponzi schemes guarantee huge returns for doing nothing. It is a ‘get rich quick scheme’ which seems to be quite suspicious.

Hesitation for Paper Work: Any investment scheme which lacks proper paperwork, legal process and has inaccurate and misleading account statements is a Ponzi scheme.

Unlicensed Seller or Schemer: The schemers or investment companies running a Ponzi scheme does not hold any license or registration as declared mandatory by the federal and state laws and regulations.

Difficulty in Encashing Investments and Returns: The investors, especially the new entrants, are unable to withdraw their funds or faces delay in withdrawals in such a scheme.

The Emergence of the Ponzi Scheme

Ponzi scheme was earlier known as “robbing Peter to pay Paul”. Later, it was named after Charles Ponzi, a well-known scammer of 1920s, following the disclosure of his fraud.

In the 1920s, postal reply coupons were trendy in the USA. Whenever a person posts a mail to another person living across the border, he or she tends to purchase an international reply coupon along with it, to facilitate the postage payment for the expected reply mail from the receiver.

The price of this postal reply coupon varied from country to country. Charles Ponzi found an opportunity to make money from this price fluctuation by purchasing these coupons from the country where they were available at a low price and selling it for a higher price in the USA.

He called out for investors to put money in his scheme under the name of ‘Securities Exchange Company’, the entity he formed and allured these investors with a guarantee to pay 50% return on the investment within 45 to 90 days.

The idea didn’t work out to be practical since Ponzi incurred high cost and time consumption in the transportation of coupons overseas and selling them for cash.

He decided not to disclose the failure and created a myth among the investors that his idea was extremely profitable. New investors funded his scheme seeking high returns. Ponzi used this money to pay off the old investors to maintain his goodwill and keep the scam going.

Within nine months period between 1919 and 1920, almost 40000 investors pooled in their hard-earned money, summing up to $15 million in this false investment scheme.

At a point of time, the investment note (i.e. the promise to pay back the investment value with a 50% return within three months) issued by Charles Ponzi became a credible instrument. Its significance became even more than that of American money.

Later, the scheme was exposed, and it collapsed in no time, causing a massive loss to the investors. Charles Ponzi was arrested and imprisoned by authorities for his misdeed.

Ways to Beware of a Ponzi Scheme

An investor can avoid investing in a Ponzi scheme if he or she carefully gain knowledge about the proposed plan and wisely takes any decision.

Following are some of the ways through which a person can examine an investment proposal:

How does a Ponzi Scheme end?

A Ponzi scheme will collapse sooner or later. The way such a scheme ends can be either of the following:

Bitcoin is a Ponzi Scheme

One of the most prominent examples of a Ponzi scheme is the cryptocurrency ‘Bitcoin’. In India, it was introduced by a schemer named Amit Bhardwaj.

He uses to throw lavish yacht parties to flaunt his wealth which he stated as the income from cryptocurrency.

He introduced one more token or cryptocurrency, called MCAP.

With his promise of yielding 10% return per month from bitcoin within 18 months of investment, he was successful in tricking thousands of Indian investors and accumulating a sum of $300 million.

Soon the scam was revealed, and many FIRs were filed against Amit Bharadwaj. He went missing but was arrested and imprisoned later on.