Definition: Marginal utility (MU) is the utility acquired from consuming an additional unit of a commodity. Utility refers to the ability of a product to fulfil a person’s need, want or desire, which keeps on diminishing as the following unit of a commodity is consumed.

Total Utility: Total utility is the amount of satisfaction which a person derives from consumption of all the units of a commodity at a particular time.

For making the concept of MU more clear and easy to understand, the following assumptions are taken into consideration:

Let us now strengthen our concept over marginal utility and total utility with the help of the following illustration:

A person returned home from the market on a bright sunny day. He was extremely thirsty and grabbed a bottle of cold water to satisfy his thirst.

To analyse the marginal utility and total utility which he derives from each sip of water, we must go through the following utility schedule:

From the above schedule, we can analyse that in the first sip the person achieves the highest level of satisfaction since the MU is at its highest is nine utils. The total utility is also nine at this point.

The MU or satisfaction level goes on decreasing with each sip until the third sip of water. The total utility is increasing but at a diminishing rate.

At the fourth sip, the MU becomes zero, which indicates that the person is not feeling thirsty anymore. The total utility remains constant.

Eventually, at the fifth sip, we can see that the MU becomes negative. This indicates that the person is deriving negative utility out of his consumption and that any additional sip may affect him adversely. At this point, the total utility starts declining.

The above example is plotted on a graph to view the relation of marginal utility with the total utility: 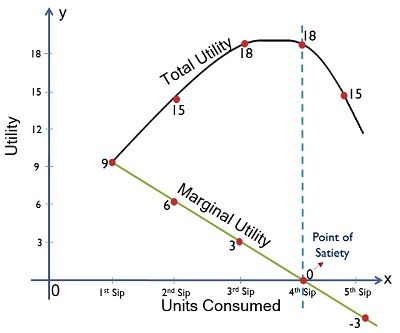 Relation Between TU and MU

In the above example, we have already seen that the marginal utility and the total utility are the interlinked concepts. 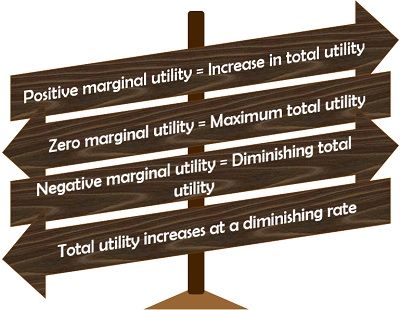 If the MU is a positive unit, we may say that the total utility goes on increasing. It means that the consumer is getting positive satisfaction out of each unit consumed.

When the MU becomes zero or neutral, the total utility is at its maximum. Thus, stating that the consumer has reached the optimum level of satisfaction. This is the ‘Point of Satiety’.

As the marginal utility shows a negative value, the total utility also begins to drop. It indicates that the consumer no longer needs the commodity for that particular period.

MU is generally seen as diminishing with the consumption of each additional unit though at times it can be seen as increasing too. This feature determines its type.

To know more about its different types, please go through the following explanation with examples:

Positive Marginal Utility: A consumer derives a minor satisfaction each time on consuming an extra unit of a commodity.
For example; a hungry person feels the highest satisfaction while eating the first slice of bread. Then the pleasure goes on decreasing with the consumption of more bread slices since he is no more hungry.

Zero Marginal Utility: In zero MU, a consumer becomes neutral towards the consumption of a commodity since it doesn’t satisfy him.
For example; a healthy person gets a pack of insulin injections, which is of no utility to him.

Negative Marginal Utility: A consumer is having an adverse effect or deriving a negative satisfaction from each additional unit.
For example; a person participating in a burger eating challenge feels full after eating four burgers but is still eating those additional ones to win the competition.

MU is not uniformly applicable to all kinds of commodities or activities. For some, it is positive while for others, it is negative. Some products even have a zero marginal utility.