Definition: An indifference curve is a convex shaped curve depicting the graphical representation of the different combinations deriving the same level of satisfaction to the consumer by considering two commodities. It functions on the principle of the diminishing marginal rate of substitution (MRS).

Example: A person went to the grocery store to buy cereals and cookies.

He has to decide now how many packets of each he must buy to achieve the maximum utility level.

Here, the indifference schedule provides us with possible combinations of the two commodities, i.e. cereals and cookies. Each of which gives the same level of satisfaction to the consumer. 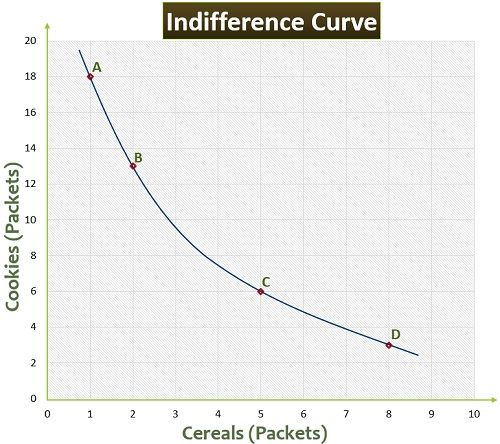 The marginal rate of substitution is the proportion at which the quantity of a particular commodity is sacrificed in relation with the increase in the quantity of the other commodity, such that the utility derived from the new combination is same as before.

It is the slope of the indifference curve depending upon the willingness of a consumer to sacrifice one commodity for another.

Where -∆Y is the decrease in the quantity of commodity Y; and

∆X is the increase in the quantity of commodity X.

In the above example of the Indifference Curve, let us consider cereals as X and cookies as Y. Then;

As we know, no two goods can entirely substitute each other. Thus the value derived from each additional unit of one commodity diminishes rapidly in respect to the quantity of the product which is being sacrificed.

An indifference curve functions on the principle of diminishing marginal rate of substitution, which is one of its distinctive characteristics.

It possesses multiple other properties; the primary ones are explained below: 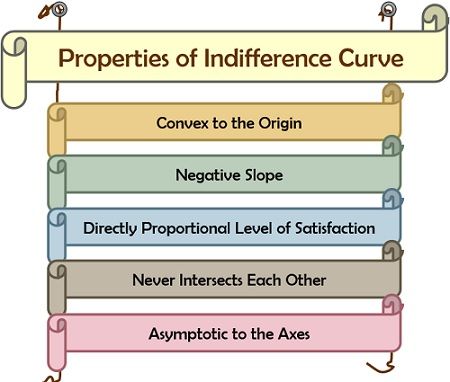 Convex to the Origin

Never Intersects Each Other

One of the distinctive properties of the indifference curves states that they never cut across each other. This is because each indifference curve provides a particular level of satisfaction or utility to the consumer.

No two indifference curves can give the same utility to the consumers. If they intersect, it will signify that there is at least one combination in both the curves which provides an equivalent utility which is not possible.

Asymptotic to the Axes

Here, the consumer is assumed to spend on both the products by checking out all the possible combinations deriving the same utility to him. Therefore, no product quantity can be zero, which means the line cannot cut on the axes.

To simplify the concept of indifference curve and to properly analyse the consumer’s demand of two different commodities, the various assumptions are made.

Let us now discuss in detail, the assumptions of the ordinal theory of the indifference curve: 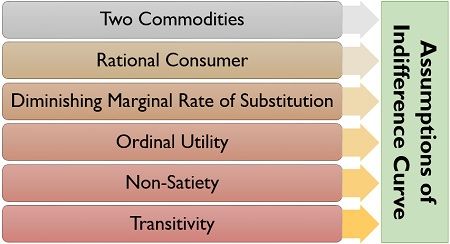 Criticisms of the Indifference Curve

The major criticism of this theory is that it is based on unrealistic assumptions which question its economic viability.

Moreover, it is only applicable to complementary goods where both the preferred products are not the perfect substitutes of each other. Instead, they act as a partial substitution.

Some disregard the concept claiming that a concave indifference curve is even possible theoretically. In the practical scenario, the preference of a consumer keeps on changing, which makes this concept vague.

An indifference curve defines a simple fundamental that with the increase in the utility from one commodity, the utility from the other commodity decreases, simultaneously, the total utility derived from both the products is the same at all the combinations.