Definition: A contract can be stated as an agreement which is legally enforceable on both the parties involved in it. We can say that any of the party concerned can redress to the court of law on non-fulfilment of the contractual obligations by the other party.

What is an Agreement?

When an offeror keeps a proposal in front of the offeree, who accepts it; a promise is made betwixt the two parties. This is termed as an agreement.

An agreement becomes a contract only if it can be presented in the court of law on non-compliance by any of the parties involved.

Let us now discuss the legal recognition of a contract in India.

The Indian Contract Act, 1872 is relevant to the entire country as from September 1, 1872.

It was formed to govern the fulfilment of obligations by the parties engaged in a contract. The clauses of this act were based on the various universal principles and practices of the English Law.

This act is based on the fact that every contract consist of an agreement. And this agreement is made of a promise or promises to fulfil the obligations. These obligations include some kind of consideration by each party for one another.

According to the Indian Contract Act, 1872, each concerned party should meet its contractual obligations in the desired manner, in adherence to the law.

If any party fails to accomplish its part of the contract, this act also states the penalty and compensation payable by the delinquent party to the aggrieved party in case of such breach of contract.

In our everyday lives, we come across and involve in many contracts, knowingly or unknowingly.

Say, when you buy sugar from a grocery store, it is a contract. How?

When you go to a grocery store, the shopkeeper makes an offer to sell 1 kg sugar at ₹40. You accept that offer and enter into an agreement.

The shopkeeper weighs 1kg sugar, packs it, and hands it over to you. Now you pay ₹40 to that shopkeeper since, you are legally obliged to do so, as per this contract.

Essential Elements of a Valid Contract

An agreement needs to fulfil various conditions before transforming into a full-fledged contract.

Let us now elaborate all those features which differentiate a contract from an agreement: 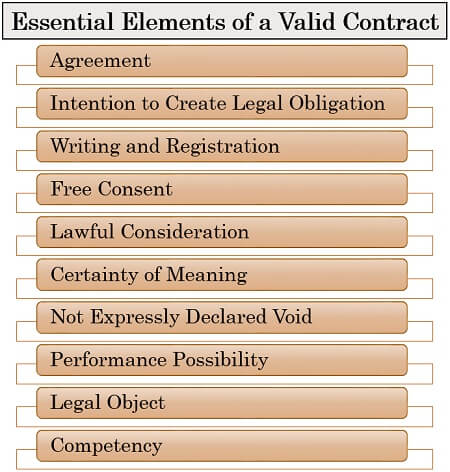 Agreement: When one party brings up a proposal and the other party accepts it; is the base for every contract.

Intention to Create Legal Obligation: The involved parties should aim at creating a legal responsibility on one another. That is on non-fulfilment of the contract; the parties can seek legal consequences.

Writing and Registration: The contracts can be formed orally or in writing; however, in some cases, only a written and duly registered contract is acceptable.

Free Consent: The parties must mutually agree upon the contractual terms and conditions; independent of any fraud, mistakes, undue influence, coercion and misrepresentation.

Lawful Consideration: The parties to the contract must jointly agree upon a fair and legal compensation or price.

Certainty of Meaning: The meaning of a contract should be apparent, and the purpose of it should be wholly mentioned to keep it valid.

Not Expressly Declared Void: The agreements which are not otherwise considered to be unlawful (such as those made to restrict any trade practices, marriage or legal proceedings); are liable to become contracts.

Performance Possibility: The terms of the contract should be lawful as well as practical enough to be executed by both the parties.

Legal Object: There should be a lawful purpose or aim behind a contract.

Competency: Both the parties must be capable of participating in a contract according to the court, i.e., they should be major (i.e., more than 18 years of age), mentally sound and free from any lawsuits or disqualification by law.

Process of Entering into a Contract

When an agreement is not backed by any surety of performance, a contract legally bound the parties to abide by its terms and conditions.

A contract is formed in five simple steps, as stated below: 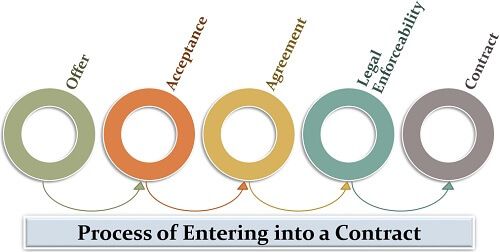 A contract is an indispensable part of our lives. We come across and become a part of several agreements daily, through the promises we make.

However, we may not be able to fulfil each of these promises. But, the contracts are more seriously meant to be executed, since its non-accomplishment may lead to legal actions.