Definition: Breach of contract refers to the termination of a contract (whether in written, oral or implied form), after one of the contracting parties, fail to meet its part of contractual terms. Such a non-compliance is usually unjustifiable from the side of the breaching party.

Some of the other reasons include incomplete performance, delay in payment, failing to accomplish order on time and not meeting the expected quality or standard.

In case of breach of contract, the aggrieved party can resort to a legal remedy for recovering its loss or damage.

Mr Y signed a contract to buy all the wheat grown on Mr Z’s farm @ ₹1800 per quintal. However, at the time of harvesting, Mr Y denied buying the crop at the decided price.  Mr Z yields 50 quintals of wheat, for which Mr Y offered a price of ₹75000 altogether. This a breach of contract.

What are the essential components for declaring a case as a breach of contract?

Following are the various elements which can help us in identifying a case as a breach of contract: 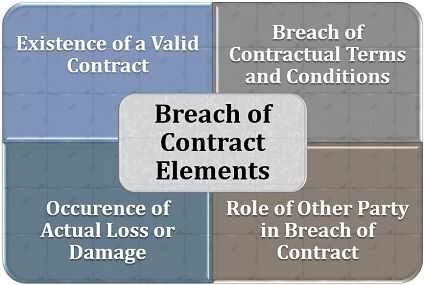 Types of Breach of Contract

The occurrence of a breach of contract, on or before the due date determine its kind. Also, it is differentiated in terms of the magnitude of such disregard.

Let us now go through its various types in detail below: 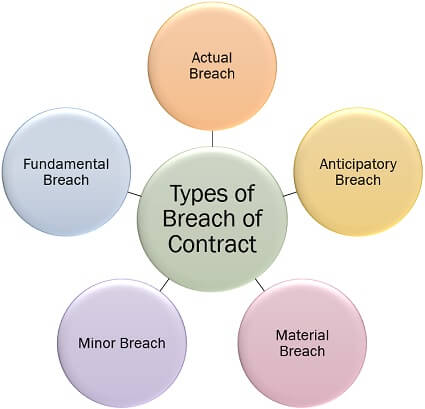 If one of the parties denies accomplishing its contractual duties on the due date itself, such a situation leads to an actual breach of contract.

For Instance; Mrs A took the order of catering services for Mr B’s wedding party dated December 18, 2019; but she refused to provide the services on the due date.

When one party refuses to meet its part of the obligations of the contract before the due date, the other party can terminate the deal and claim damages due to this breach of contract.

For Instance; Let us take the same example as above; on December 01, 2019, Mrs A refused to provide the catering services for the wedding of Mr B anticipated on December 18, 2019.

A material breach is a significant violation of a contract where one party fails to meet its obligations in the said manner, defeating the whole purpose of the contract.

For Instance; Mrs Y gave the contract of making furniture for her new home to Mr Z at ₹1000000. Mrs Y specified that she wanted everything to be made out of premium teak wood.

Mr Z still used ordinary wood to make the furniture. Mrs Y refused to make the payment due to such material breach.

When a partial non-fulfilment of the contract terms by one party, cause inconvenience to the other party, it is called a minor breach of contract.

The loss or damage in such a case is not that immense; however, it can be claimed if the aggrieved party had to bear some financial consequences due to it.

For Instance; Mr P ordered a necklace at ABC jewellers for his wife (as her birthday gift). He asked the shopkeeper to get it ready and deliver it on her birthday. The delivery was delayed by a day, ruining Mr P’s surprise.

If the action of one party ceases the performance of contractual obligations by the other party, is considered as a fundamental breach of contract.

The aggrieved party can sue the other party in the court for the compensation on damages occurred or for the non-execution of the contract.

For Instance; I ordered a pair of spectacles at an optical store. The store gets the glasses made from a third party vendor. The vendor hired for making the glasses never made one. Therefore, the optical store was unable to fix it in the frame.

Thus, I neither received my spectacles and nor did I made the payment to the optical store. Also, the store manager was not liable to pay the third-party vendor.

Consequences of Breach of Contract

A breach of contract necessarily results in the loss of one or all the parties associated with it.

Given below are some of the significant damages faced and claimed by the non-breaching party: 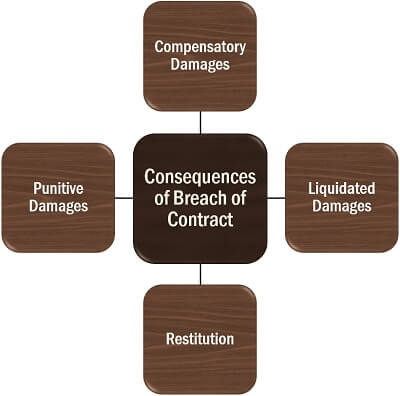 Liquidated Damages: When a fair compensation for the loss on non-fulfilment of the obligations is pre-determined by the contracting parties, it is termed as liquidated damage.

Restitution: The non-breaching party when puts up evidence, claiming that the breaching party is wholly responsible for the damage, the court considers it as restitution case, ordering the latter to reimburse and compensate the former for all the expenses and losses it incurred.

Punitive Damages: The loss from breach of contract is considered to be severe and punishable when it involves fraudulent and malicious practice.

In such exemplary damage, the court orders the breaching party to give a considerably higher amount as compensation to the non-breaching party.  This is done to penalize the miscreant or defaulting party for discouraging immoral activities.

Given below are some of the prominent remedies available for the breach of contract: 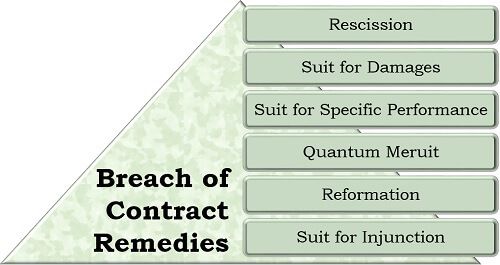 One of the most common solutions is to terminate the contract as if it never existed. Whenever, there is a breach of contract from one end, both the parties can step out of the promise.

The aggrieved party can file a lawsuit for claiming monetary or other forms of compensation; for the damages or loss incurred by it while carrying out the regular business activities.

Two of the significant conditions where a claim for breach of contract is applicable are as follows:

The court intervenes in favour of the aggrieved party, ordering the other party to adhere to the initial contract and meet its part of the contractual duties effectively.

When one of the parties have executed its obligations partly when the other party obstructs it from completing the contract, then the aggrieved party can claim compensation for the work already accomplished.

It is ‘do-over’ or reframing of the contract to accomplish the purpose of both the parties more efficiently than before.

Through suit for injunction, the court restricts a party involved in the contract from performing a particular act which is considered to be unethical.

How can the breaching party defend itself in the court of law? The defendant party can prove itself innocent in the legal proceedings by raising the following issues: 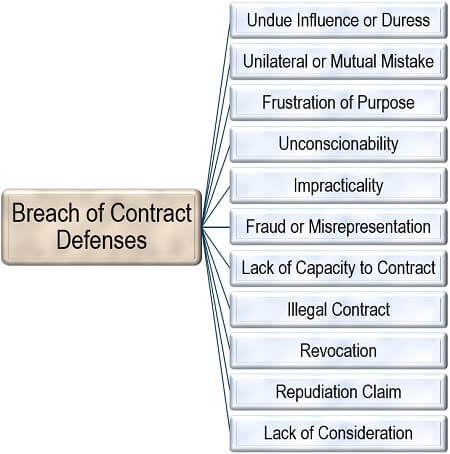 Undue Influence or Duress: If the contract is made by undue influence, the defendant party can disclose the form of coercion used for its forceful consent, such as the threat of life or physical harm, blackmailing, etc.

Unilateral or Mutual Mistake: When one party misinterprets the contract, while the other party is evident on the terms, it is considered as a unilateral mistake. The court will not declare such a deal as void until it is proved that the other party created the misunderstanding or knew about it from the very beginning.

Mutual mistake is when the misunderstanding is from both sides. In such a case, the court intervenes to bring in unanimity between the involved parties. However, if the contract is misinterpreted to such an extent that it loses its purpose, then the court would cancel it.

The frustration of Purpose: The defendant party can claim that, due to some circumstances or events, the intention of entering into the contract has been thwart, leading to non-fulfilment of the obligations.

Unconscionability: When one of the party is unethically induced in a contract, or the contractual terms are unjust; the deal is considered to be malicious. And therefore, it becomes invalid in the eyes of the law.

Impracticality: Due to certain unavoidable circumstances, the aggrieved party stands incapable of executing its obligations. This default of performance is not deliberate; instead, it is a result of an unexpected event.

Fraud or Misrepresentation: If one party knowingly falsify the material matter of a contract, to which the other party relies upon, it is termed as a fraud.

However, if one party unintentionally misstates the material matter, and the other party agrees to the contract on this basis, it is considered as misrepresentation. The court terminates the deal based on fraud or misrepresentation.

Lack of Capacity to Contract: The deal can become void at the choice of the person to the contract; who is an unmarried minor. Also, a contract with the person who is mentally incapable or retarded is taken as voidable.

Illegal Contract: One of the ways is to prove the deal as unlawful since such contracts are void or invalid for the court of law.

Revocation: When the offeree disagrees to the offer before its acceptance, but the contract was still enforced on the revoking party, it may claim this revocation as a defence for breach of contract.

Repudiation Claim: If one of the party shows by its actions or unconditional words, the refusal to fulfil its contractual obligations, it is a case of repudiation. The other party can firmly raise the issue of such denial as a defence against the repudiating party for the breach of contract.

Lack of Consideration: A contract is all about consideration from both the ends. However, if a contract binds only one party to provide consideration to the other party, without expecting anything in return, it is considered to be unenforceable.

Also, if one of the party partially meets its obligations and fails to provide the complete consideration as mentioned in the contract within the stipulated time, the aggrieved party can sue it for the damages occurred to it due to such non-fulfilment of the contractual terms.

However, it does not lead to the invalidation of the contract. This is a case of defence for the failure of consideration.