Definition: Organizing is one of the most prominent function of management that aims attention at assigning and organizing human as well as other financial resources efficiently to carry out the plans of the organization successfully. It also involved in constructing, establishing, and managing working relationships and requires the planning of tasks and an assorted way to accomplish that task.

After competent planning, arranging the organization’s framework effectively helps in identifying the similarities and differences among various organizations.

Organizing is a process that manages how the task is distributed amongst the employees and departments and determines the policies to be followed. The process of organizing consists of seven steps; they are as follows: 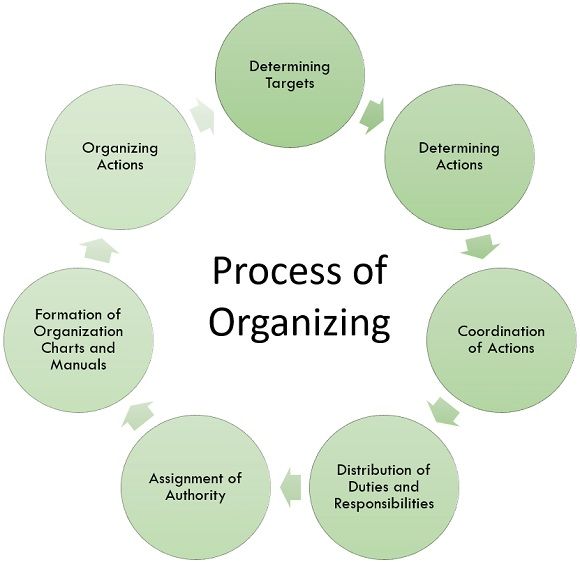 The first stage of organizing process should be to determine the targets to be fulfilled. Employee association, products, market, all rely upon the nature of the business. Both financial, as well as social targets, should be determined accordingly in a scheduled manner and then managing them according to their priority and categorize them as primary, secondary, long-term and short-term targets.

The second step is to find out and make a list of required actions to achieve the desired targets of the organization such as preparing accounts, computing sales, record-keeping, quality control, inventory control, etc. All such actions have to be arranged and classified into units.

After determining actions, it is necessary to coordinate actions, i.e., organizing jobs into uniform work units, departments, and segments, and all such functions come under departmentalization. For grouping purpose, distinct groups such as territorial, process, functional, product and customer can be used, which helps to protect specialization.

4. Distribution of Duties and Responsibilities

To perform the delegated work, an individual along with responsibilities also needs authority or power to make decisions regarding his work so that he/ she can perform his/her task productively. As one cannot perform their work without necessary powers and authority and such authorities are given according to their work and level. With the delegation of work, a proper chain of command runs from top-level to bottom level of employees.

6. Formation of Organization Charts and Manuals

Synchronizing all the actions and attempts of all the employees is necessary to establish the effectiveness of the specialized functions. The Interrelation between tasks and employees must be pre-defined so that everyone knows that, to whom they are answerable and from whom they have to take orders. 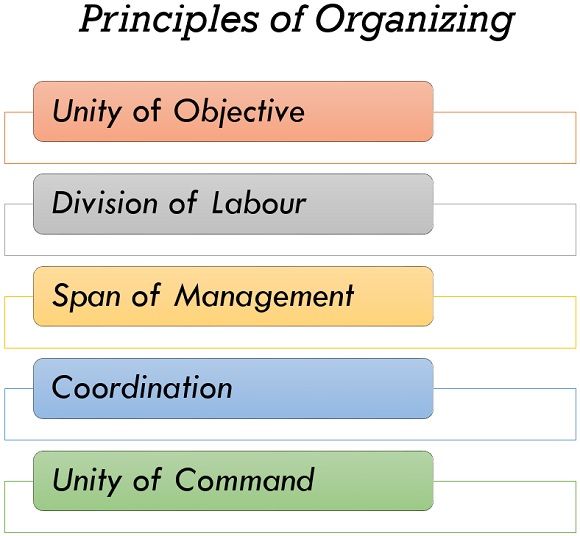 Division of Labour is one of the fundamental principles of organizing which implies differencing various departments or sections within the organization. In it, various different tasks are distributed amongst the employees of an organization according to their abilities and specialization. This principle enhances both the employee and the organization’s productivity as it reduces the burden of several tasks, and employee can focus on particular assigned task and give his/her best in it.

For example: In case of machine actions there will be a separate group made to handle that department, similarly, for selling activity, a group will be made who will only handle selling functions and so on for all further activities in company labour gets divided as per their ability that leads to specialization in their field of work, since there are different departments all needs to be coordinated with each other.

A manager can supervise a limited number of persons effectively, and because of this span the organizational levels are created such as top managing director will manage general managers, then general managers will manage some deputy managers and so on the chain goes on from top to bottom level of employees. As the number of organizational levels increases vertically, it will lead to cost rising and communication barriers, as a result of which planning and control become more complicated.

Organizing is one of the management functions identified by Henri Fayol, which is made for providing or arranging necessary tools for running the business efficiently and effectively. Fayol gave specific attention to the organizational structure in this function.