Definition: An intrapreneurship is a phenomenon of empowering the employees within the organization, by valuing their ideas and converting them into a profit-making model for the business. The organization would bear the associated risk and loss if the intrapreneur’s project failed.

It is the combination of employee responsibilities with his/her entrepreneurship skills that creates an intrapreneur. An intrapreneur is the employee who avails an opportunity, develops an idea and takes it to the next level for the betterment of the organization.

Intrapreneurs are often falsely conceptualized as entrepreneurs. Yes, they are entrepreneurs, but in the skin of employees.

Let us now read below the features of intrapreneurship to go through this concept in detail: 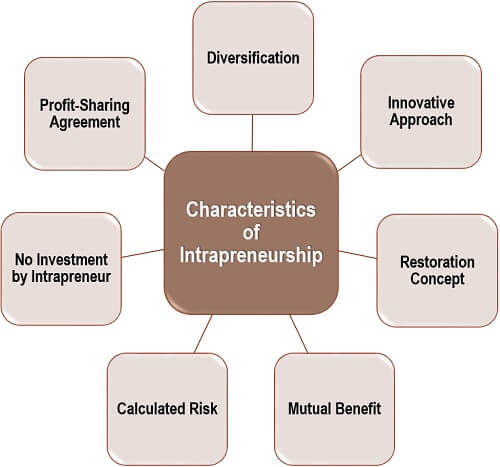 The present-day market is highly volatile. Constant improvement and creative inputs have become quite essential for companies to stay in the competition.

Intrapreneurs have the solution to many such problems. Let us now see how can intrapreneurship help: 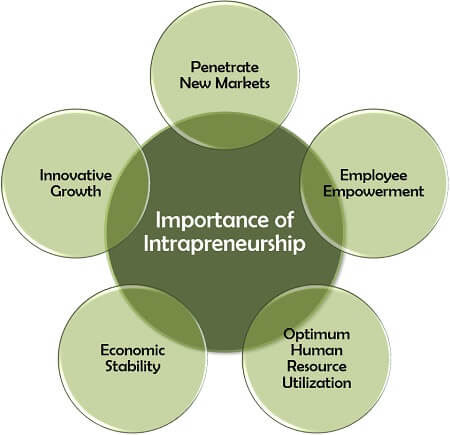 To understand the basic functioning of the intrapreneurship in any organization, we have summarized the whole process into the following steps: 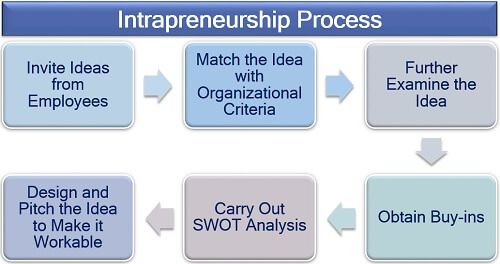 Step 1: The first step is to encourage the workers to put forward their views and opinions. Also, the employees should be made familiar with the person or authority in front of whom he/she can present the idea.

Step 2: The next is analyzing the compatibility of the idea with the organizational need, mission, objectives, values, vision, consumer demand, etc.

Step 3: Now is the time to inspect the idea from different perspectives to seek any scope of betterment.

Step 4: This step is quite crucial as it aims at getting the approval on idea implementation from all the related parties like team, associates, investors and even customers (in case of industrial buyers).

Step 5: The final feasibility test of any new project can be done by identifying the SWOT (strengths, weaknesses, opportunities and threats) for both, the idea and the person himself or herself.

Step 6: After the idea is well tested for compatibility, applicability and feasibility, it is modified and crafted such that it becomes workable for the organization.

In intrapreneurship, companies grow because of and with their valuable human resource. Some of its benefits are discussed below: 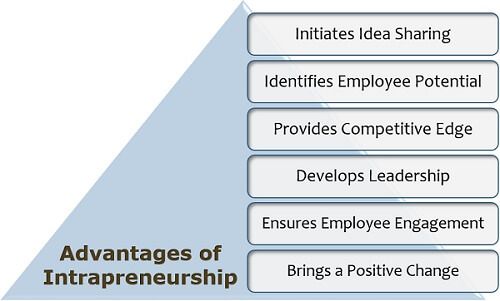 When an organization head towards adopting intrapreneurship as a part of its corporate culture, the following barriers may arise on the way of making such improvements: 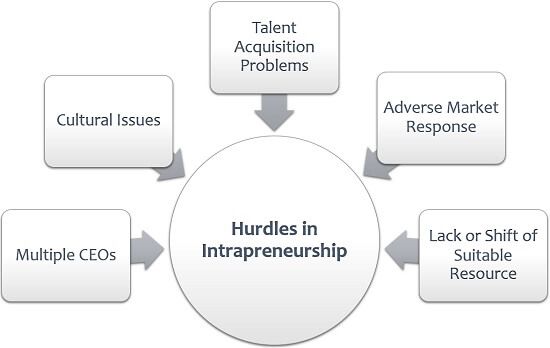 Happy meal, as we all know, is a kids centric meal box from McDonald’s is an intrapreneurship idea.

Dick Brams, one of the regional managers of the brand at St. Louis, developed an idea of serving the kids with a complete meal. He came with an innovation of making a box of food and beverage items in small quantities, in the year 1977.

When he presented the whole thing in front of the management, his idea was instantly taken into consideration. The company thus introduced the ‘Happy Meal Box’ in the year 1979, which was a great success.

What happens when companies suppress Intrapreneurship?

Let us understand the extent of the disaster that may take place on not taking intrapreneurs seriously. The failure of Eastman Kodak is the most prominent example of this.

When Steven Sasson was working as an electrical engineer (or say an intrapreneur) at Kodak, he developed the world’s first digital camera in the year 1975.

He demonstrated the product in front of different departments of Kodak, from managers to bosses. However, the idea was firmly rejected by all, saying that it could ruin the company’s monopoly.

This was the most prominent early bird chance missed by Kodak. The company faced bankruptcy in the year 2012, after the emergence of some popular digital camera brands like Nikon and Canon.

All this was a result of not being innovative and discouraging intrapreneurship.