Definition: Employee orientation is a systematic approach of an organization to deliver the relevant information to the new hires so that they can efficiently perform the given tasks. The whole-sole purpose behind this induction process is to familiarize and accustom the new employees with the work environment.

Example: ‘Google’ is well known for employee satisfaction. The company’s employee orientation and training program equally set a benchmark for other organizations.

The new hires at Google are considered as Nooglers; they are initially engaged in a two weeks orientation program. In this period, a new employee is made familiar with the organization’s structure, culture, work practices, programming, technologies, etc.

Also, the Nooglers are provided tutorials through Codelabs to enhance their efficiency at work.

Google has a different vocabulary, and everyone uses it for communication in the workplace. To be familiar with the glossary, the new hires are provided with a developer handbook.

The company even came up with a mailing list ‘NEHEN, i.e., Noogler Engineers Help Engineering Nooglers’ for those new hires who hesitate to ask doubts openly.

Employee orientation is considered as just an introduction session by some.

However, it fulfils some of the most significant purposes of the organization; some of these are as follows:

Every organization is a build-up of people who have varying mindsets. Let us now find out how companies can carry out orientation programs: 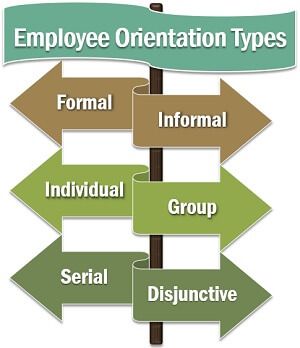 Serial Orientation: A well-experienced personnel execute the orientation of the new hires as per the given criteria and norms.
Disjunctive Orientation: Here, the new employee does not have any role model to follow; instead, he/she has to develop one’s inventive ways of doing things.

A human resource manager must design an orientation program in such a way that it creates a positive and long-lasting impact on the new hires.

Let us now go through the steps which leads to the creation of a compelling employee orientation program:

How can the organization make their employee orientation enjoyable?

The first day of a job leaves long-lasting memories along with a strong impression of the organization in the employee’s mind.

Following are some of the tips to design an influential orientation program:

The person leading the orientation program should be soft-spoken and humble. He/she must patiently handle questions and doubts.

The orientation program should include more audio and video presentations along with allowing considerable interactions, to make it interesting altogether.

Also, the orientation content should comprise of all the necessary facts, but the delivery of information should be short and straightforward.

Developing cordial relations and connectivity with each individual makes the orientation more effective. The person leading should emphasize the role of the new hire or expected results from him/her for the company’s growth and success.

Consequences of an Ineffective Orientation Program

If an orientation program goes wrong, it may adversely impact the whole organization in one or the other way.

Given below are some of the most prominent outcomes of a substandard orientation plan: 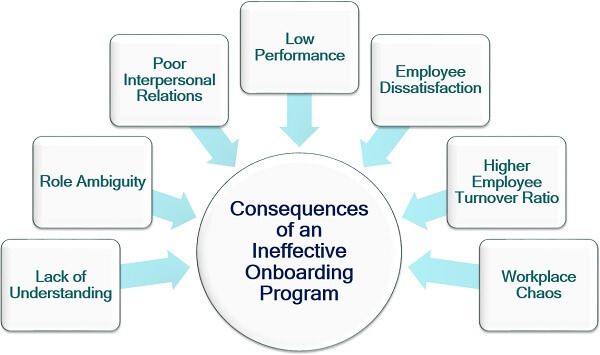 A checklist is an essential tool to make sure that the orientation program involves maximum and valuable information. Also, it certifies that no crucial fact is left untold.

An orientation checklist is a piece of evidence for the new employee is aware and accept that he/she has the complete knowledge of the listed topics.

The orientation process has been segregated into three different stages for its simplification. These are discussed elaborately below:

At the time of making the offer to the selected candidate, the pre-orientation is provided in written (usually through a mail).

It includes the basic information about the organization, salary, compensation, other benefits, policies and procedures, formalities, documents required, etc.

It is that orientation stage on which the candidate’s joining decision relies upon.

Next, when the candidate agrees upon the terms and conditions and joins the organization, the job-site orientation is provided on the first day to the office.

It comprises of the site visit and tour, to make the employee acquainted with the workplace, lunch area, washrooms, parking lot, fire exits, emergency equipment and other amenities.

Also, the new hire is familiarized with the head office, his/her department, team, manager and colleagues.

At this crucial phase, the new employee is introduced to his job profile. He/she is enlightened upon the individual roles, authority, responsibilities and duties (as the job position demands).

Also, the new hire is briefed out about the supervisor’s expectations, training sessions and awaiting opportunities.

Moreover, application of skills (possessed by the new employee) for accomplishing a specific job or work is also apprised and reviewed at this stage. In short, it discloses information related to job description and specification.

Let us now see how a new employee orientation checklist looks like: 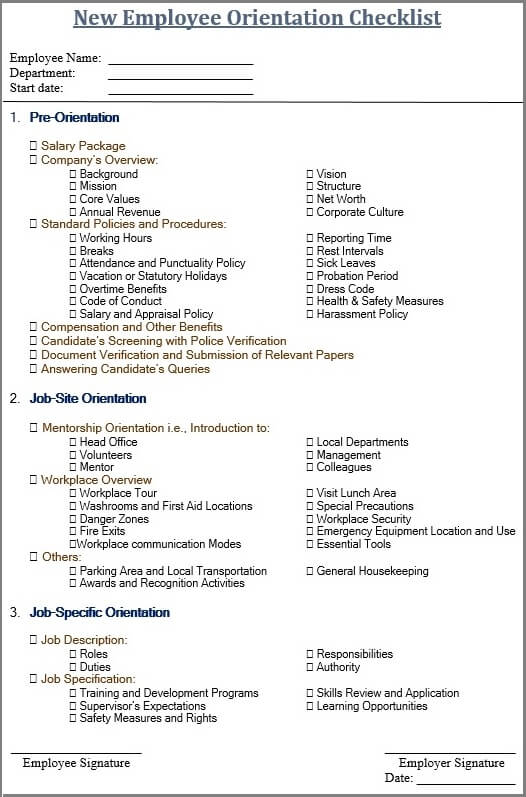 The given list may vary according to the job position. Also, the orientation program and the checklist is updated frequently to make it more impactful.