Definition: Accounting Principles are the rules and regulations of the accounting language accepted worldwide and are made to make the language understandable for all and ensures the accounting records reliability. Accounting principles should be followed to maintain the resemblance of the records.

So that the records should reveal the same information to everyone using the records to avoid the difficulties and confusions arising due to variation of patterns followed by every individual.

As if rules are not set up, every individual will perform transactions according to their way, and it becomes impossible to compare such records and measure the reliability of the accounting statement.

Thus, it is always advisable to the accountants to follow accounting principles while making the books of accounts of the business.

The rules derived from the experience and accepted universally becomes the principles when proved beneficial and such principles are known as “Generally Accepted Accounting Principles” or “GAAP”. It consists of accounting principles along with the methods of exercising such principles.

For developing accounting techniques, few rules are required essentially to regulate such techniques, and such rules are the basic accounting principles, navigating the style of recording and reporting of transactions.

The following are some of the basic principles of accounting: 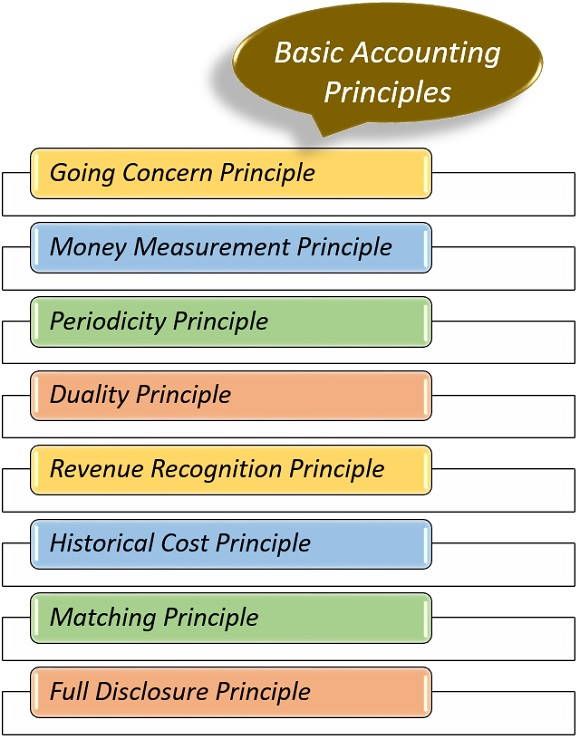 This principle underlines the fact that transactions occurring during the year should have a monetary value to record them in the financial statement. Else, they cannot be recorded such as skill level of the employees and product durability cannot be recorded.

However, these factors have a significant impact on the growth of the financial position, but they are not allowed to be stated in the financial records.

This will help in recognizing the loops of the business and the reasons behind losses on the basis of which necessary measures can be adopted to avoid such losses in the subsequent years of business.

Duality Principle of accounting is based on the dual facets of the entries made in the records, the example of this principle is the double-entry system of accounting in which every entry has a dual effect, i.e., “Debit” and “Credit”. If any entry gets debited, it will get credited too.

According to this principle, both the parties involved in the transaction will have a dual impact of a particular transaction.

In case of Cash Transaction

The dual impact on the selling party would be

Similarly, the dual impact on the purchasing party would be

In Case of Credit Transaction

The dual impact on the selling party would be

Similarly, the dual impact on the purchasing party would be

Revenue Recognition Principle by its name only defines that it is related to the ‘recognized revenue’ of a company. Here, revenue is a gross inflow of cash from the business activities, done throughout the year by the sale of goods, providing services, etc.

In the case of the agency relationship, the commission amount is considered as revenue income.

However, the revenue gets recognised in the earning year financial statement, whether it has been received or not.

Another example of Historical Cost principle is, suppose the land was purchased for 20,00,000 in 2015, now the value of that land has increased to 50,00,000 in 2020. The land is already recorded in the records for 20,00,000 and will be recorded on the same untill it has been realized. Its value will not increase in the books of accounts.

According to this principle, the expenses and revenue should be matched for the current accounting year, i.e., if the revenue has recognised, cost of goods sold should also be charged in the same accounting period irrespective of the cash being received or not.

Matching principle works on an accrual basis; thus, focuses on the occurrence of the event and not on the receipt of the payment.

Full Disclosure Principle specifies that there should not be any omission while preparing books of accounts. This means 100% income and expenses of a particular accounting year must get recorded in that year accounts only, to show the true and fair value.

If anything gets omitted or not shown it should be mentioned, for example, only 90% sales have been recorded, but it is irrelevant to disclose partial transactions, as it will not fulfil the objectives of preparing accounts if they will not show a correct or exact profit/loss for the year.

If full disclosures were not made in the books of accounts, financial position and performance of the business would not get disclosed fairly.

In other words, it is a set of rules defining some concepts to be followed by the business to maintain the consistency of the records.